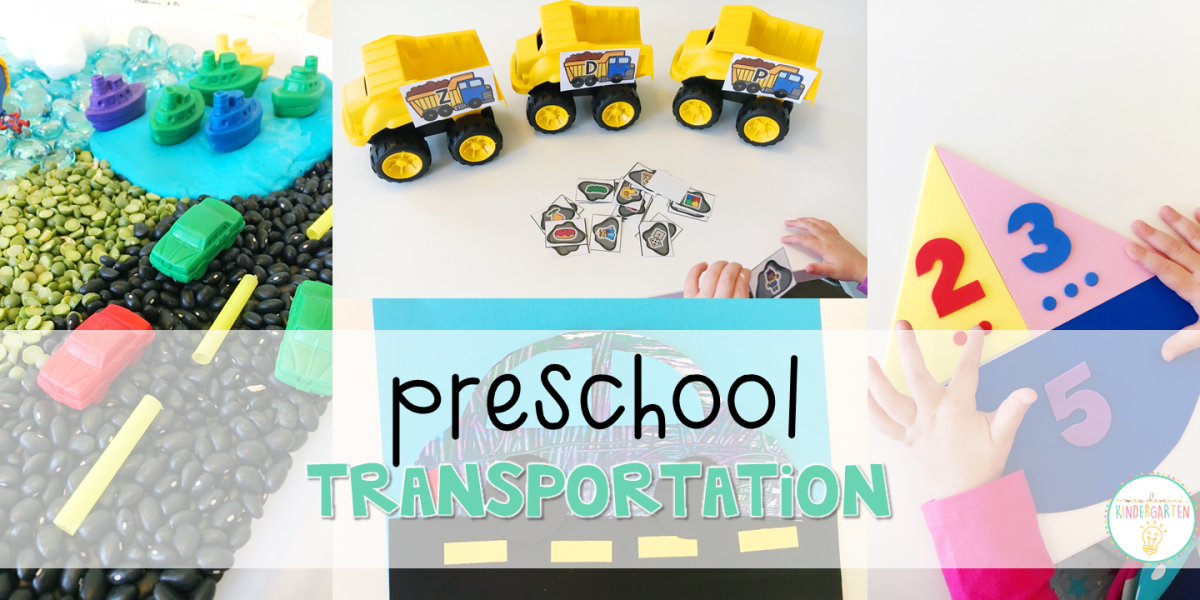 Here were our plans for our Transportation theme:

Our first story was Down by the Station by Jennifer Riggs Vetter. I love song books and this was a great one because it began with the familiar “Down by the Station” song, then there are lots of new verses introducing all kinds of fun vehicles. Afterwards we played memory with vehicle cards to build vocabulary.

This week I introduced story elements to Miss Madelynn starting with characters. I told Madelynn that usually characters are the people or animals in the story and that they are the ones that a story is mostly about.  Then we read The Adventures of Taxi Dog by Debra Barracca because I knew Madelynn would just fall in love with the characters, especially Maxi the dog.  After reading I had Madelynn draw the characters in the story. There are really only 2 main characters (Jim and Maxi) so she was able to easily identify the characters and draw them.

Madelynn loves a good guessing game, so our next book Whose Vehicle is This by Sharon Katz Cooper was a lot of fun! Each page gave clues in both the text and the pictures to help Madelynn guess what the vehicle was and then also who drives that type of vehicle. This was an easy way to introduce making inferences in a very straight forward format.

Next we read Transportation By Gail Gibbons. After reading I gave Madelynn 3 sorting mats for land, air and water along with small vehicle picture cards.  She sorted them into the correct place and tried to name each vehicle.

Our last book was My Ride from our set of Little Red Readers. Madelynn is starting to read easy level A books with patterned text. First, I read the beginning of the sentence, “I went for a ride on a…” and paused, then she read the last word. She did a great job using picture clues to read the words.   And by the end of the book she was able to read the sentence by herself.

This week we focused on beginning sounds so we started with this color by code activity. Madelynn identified each picture, then decided what letter it started with. Knowing it was one of the 5 listed on the left side of the page helped with some of the trickier sounds, then she followed the directions to make each spot the correct color.

Next, for more letter practice we used our dot stampers. We started out stamping inside the letter to make a Z for ZOOM. Then Madelynn had to find the upper and lowercase z’s in the car, stamp them and make the “Z” sound each time.

This dump truck sort was a fun way to focus on just 3 beginning sounds.  I printed labels for our trucks and lots of rocks with pictures on them.  Madelynn chose a rock then sorted it into the correct truck. Of course there was lots of driving and delivering pretend play in between. It definitely kept her engaged and learning!

For this week’s name craft we recreated this little train that we made in Tot School last year.  First Madelynn cut the train pieces out. Then she traced the letters in her name on each car. After she finished writing, she glued the train pieces together and added the cars to the back in order to spell her name. To finish off the picture she used a black marker to draw a train track at the bottom.

For our journal this week Madelynn chose to draw and label air vehicles. She drew a hot air balloon, a parachute and an airplane.  I encouraged her to label each item so she wrote HOT for hot and my teacher mommy heart grew 3 sizes that day, haha! The O was a for real accident, but she is starting to hear ending sounds in words too which is awesome progress for just a few months of journaling!

Our first math activity this week was a transportation themed sand tray.  I filled the tray with black sand and a few yellow straw pieces to form a road. Then Madelynn used small wheel cards as a model to write numbers in the sand with her finger. She also used the cut up straw pieces but decided her finger worked better.

We began to learn about addition for the first time this week with this fun build a train activity. First Madelynn chose 2 cards with numbers/colors on them.  Then she built a “train” with linking cubes to match the cards she chose (5 blue and 1 red). Next she colored her train on her paper and counted how many she had in all. The concept of “in all” was difficult at first because she still wanted to count each color separately but eventually it began to click.  Finally, I helped her to record the total for each train.

Our next addition activity was this fun counting box.  I filled a tray with our transportation counters, then set out colored number cards for Madelynn to choose from.  She used the cards to build a number sentence and model it with the counters.  Then using the counters she could count to find out the total.  Although she is too young for the abstract concept of addition symbols and equals signs she was able to find the total and read the complete number sentences (4+3=7) to me each time with help.

For this part part whole activity I cut out foam triangles and semi circles from foam sheets then added foam sticker dots and numbers to each one.  First, I had Madelynn choose 2 “sails.” Next, she identified the numbers and counted the dots.  Then, she searched for a matching boat to put underneath for the total.

For our last addition practice of the week, we used our transportation counters again along with a land, sky and water scene.  Madelynn chose 2 cards that each had a number, color and vehicle on them.  She added the matching counters to the story mat, then counted up to find the total.  After she placed the number in the number sentence we practiced reading from left to right again.  A good way to embed math vocabulary even if she didn’t totally understand the concept yet.

This activity was a no brainer.  For science this week we made a ramp by laying a sheet of cardboard on top of a plastic bin and adhering it with a bit of double stick tape. I then gave Madelynn a few strips of washi tape and a bunch of cars and asked her to predict how far each car would go.  She stuck the tape down then pushed each car down the ramp.  She insisted on moving the tape to where each car ended up to record the result, so we talked a bit about how predictions are not always correct and that is okay!

For this 2 part craft we started out by making lots of paint tracks all over a car outline with our little wheelie cars and tempera paint. After the car was completely covered, we let it dry overnight.  The next day I took a black marker and traced over the outline again so it was easier for Madelynn to see and cut.  She cut out the car, then used additional paper shapes to add details to her car an build a road scene.

With this bin Madelynn first scooped the beans out onto a tray to build a road, then added the yellow straws for lines. Next she added all of the vehicles driving them around and following the signs. Finally she discovered that the vehicles were also fun and challenging to stack so she tried to see how many she could balance without them falling over.