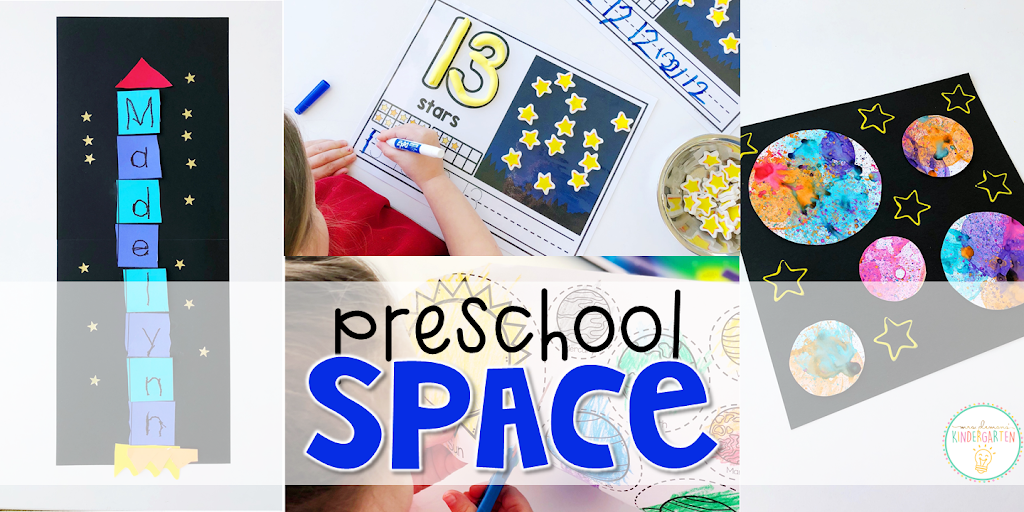 If you are looking for space activities for kids, you have come to the right place.  Madelynn loved this week full of hands-on learning about planets, stars, the sun and moon!

Here were our plans for our space theme:

Our first book this week was I Want to Be an Astronaut by Byron Barton. After reading, we talked about all of the different things the astronauts did in the book. Then I asked Madelynn what she would do if she were an astronaut and had her draw it on the response page. Madelynn said she would blast off in a rocket.

Next we read Me and My Place in Space by Joan Sweeney. While reading I used picture cards to reinforce new words. Then Madelynn made a space vocabulary book. She drew pictures to show the meaning of each word and used the picture cards and book as a reference.

One of my favorite books for teaching about the planets is Eight Spinning Planets by Brian James. Madelynn loved the raised planets on each page and the simple easy to remember information. After reading Madelynn used the book as a reference to color each of the planets. Then she cut them out. and glued them in the correct order from the sun.

Our last story was Mousetronaut by Mark Kelly. Before reading, we practiced making predictions.

I asked “After looking at the cover, what do you think this story will be about?”  Madelynn: “There’s a mouse astronaut.” Then I asked: “What will the mouse do in the story?”

Madelynn: “He’s going to fly a rocket to the moon.”

Learning vowel sounds can be tricky and are usually the last letter sounds I worry about preschoolers mastering.  So for our last book this week we read this O for outer space alphabet reader. I included a mixture of items that representing short and long O sounds. Madelynn identified the picture then pointed to each word as she read. Afterwards she colored all of the pictures in.

This week we focused on rhyme so we started with this color by code activity. Madelynn identified the pictures on the left side of the page, then searched the picture on the right for words that rhymed. Then she followed the directions to make each spot the correct color.

Next, for more letter practice we used our dot stampers. We started out stamping inside the letter to make an O. Then Madelynn had to find the upper and lowercase o’s in the outer space planet scene, stamp them and make the short “O” sound each time. Then she stamped the other letters different colors and tried to make the sounds for each one.

To practice rhyming we played this interactive moon rock toss game. I printed and cut out  rhyming word pictures and attached them to aluminum foil “moon rocks” with  hot glue. Then I labeled 3 bins with brown, black and pink colored planets. Madelynn choose a moon rock and tossed it into the rhyming color planet. (ex. down/brown)

For this week’s name craft we created this rocket name.  First, Madelynn cut the rocket pieces out. Then she wrote the letters in her name on each square. After she finished writing, she glued the rocket pieces together in order to spell her name. Then she added star stickers to complete the scene.

For our journal this week Madelynn chose to draw what she would do if she met an alien. She said “I would say I love you.” So I drew lines for each word, then we worked on writing the sounds together.

Our first math activity this week was a space themed writing tray.  I filled our clear tray with black sand then placed it on top of our light pad. Then Madelynn used small star number cards as a model to write numbers in the snow with foam stars or her finger.

For this positional word game we started out by using Magna Tiles and cans to build a rocket.  Then Madelynn rolled a die with positional words on it to find out where to put the astronaut.  We took turns practicing all of the different positions and problem solving how to put the astronaut inside the rocket (by lifting up the can) and below the rocket (Madelynn decided to put him under the table.)

Where is the Astronaut?

For our last positional word practice activity, I created this simple printable book with cut out pieces.  On each page I used a different positional word (above, below, behind, next to, between, etc.) and Madelynn cut and glued the astronauts in the correct spot on each page.

We used these mats to practice numbers 11-20 this week. First, Madelynn identified the large number. Then she made it with play dough and counted the stars in the ten frame. Next, she used a dry erase marker to practice writing the number, and finally counted out star mini erasers to fill the night sky with the correct amount.

For this sensory activity, I placed a light pad beneath a clear tray and poured black sand on top. Then I printed constellation cards for Madelynn to use as a reference. She used star reusable ice cubes and her finger to create real constellations an her own formations

This art project turned out so beautiful, I am in love! the first step involved bubble painting. First I mixed up batches of colored bubbles.

To Make Colored Bubbles:
•Pour 6 cups hot water in large bowl.
•Add 2 cups of dish soap and stir well.
•Add 3/4 cup of corn syrup to the water and stir well.
•Separate into a few cups.
•Add food coloring to each cup. (I wanted dark colors so we added about an entire vial of each color)

Then I placed the bubbles, bubble wands and paper inside a large plastic bin or box to contain the mess. Madelynn blew bubbles onto the planet outlines to cover them with splashes of color. After the paper dried, she cut the planets out and glued them to a large sheet of black paper. Finally she made star stamps with yellow paint and a star cookie cutter. So pretty!

Okay this activity was a bit of a stretch to fit in with our theme but I’ve been wanting to show Madelynn the magic milk experiment for a while and figured this would be a fun way to tie it in. To make our dancing colored planet we started with a circular glass pie plate. Madelynn poured whole milk into the dish until it covered the bottom. Then she added drops of food coloring all over the top of the milk.  I added a drop of dish soap in the center of the milk and asked Madelynn to observe closely. She was mesmerized as she watched the colors swirl and dance around the plate to make a colorful dancing planet.

We had a LOT of snow this week so I figured we would put it to good use with this open ended painting activity. I packed snow into shallow round containers to make 8 round planets. I placed our planets on a plastic tray. and Madelynn used liquid watercolors to paint each planet, mix colors, and make a unique solar system. *If you don’t have snow, you could also freeze ice in round containers.*

This bin gets really messy, so be prepared to dump it all when you are finished, but it is totally worth it! Baking soda + vinegar = tons of messy fizzy fun.