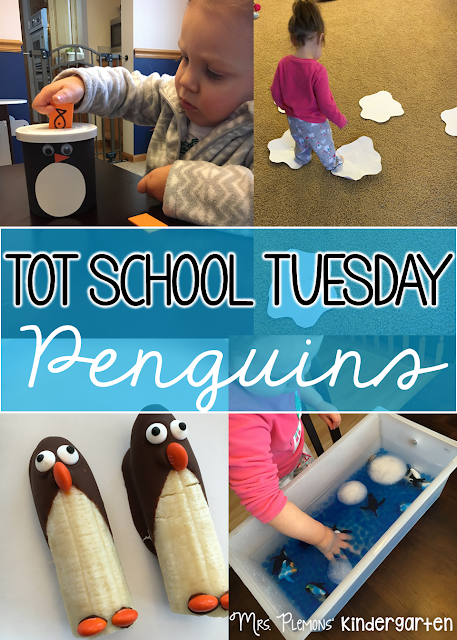 Here we are with our week 2 tot school wrap up and this week threw us a few curve balls. We decided to take an impromptu road trip to TN to visit my husbands Grandma this weekend so our Friday plans kind of got scrapped, but we still had lot of fun the rest of the week.  Take a look at what we did!
Here were our plans for the week: 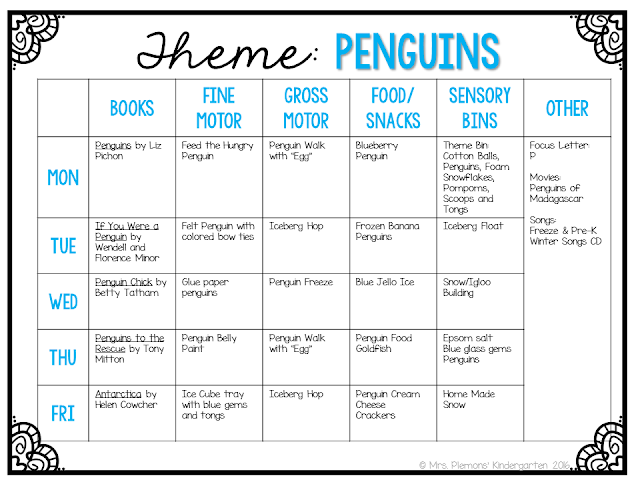 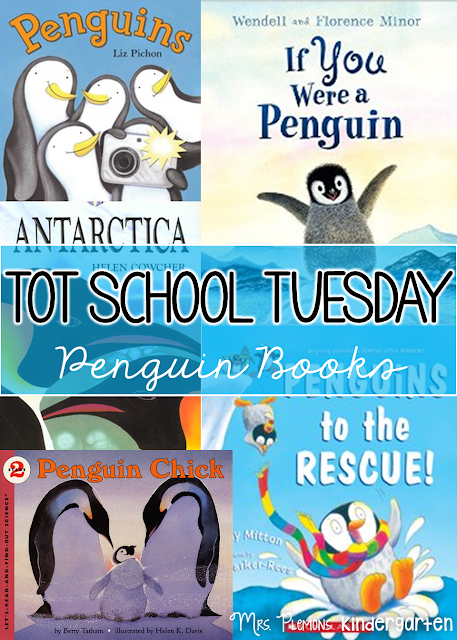 Here are the 5 books that we used as our focus books each day.
Penguins by Liz Pichon
If You Were a Penguin by Wendell and Florence Minor
Penguin Chick by Betty Tatham
Penguins to the Rescue by Tony Mitton
Antarctica by Helen Cowcher
I think Madelynn’s favorite (and mine too) was Penguins by Liz Pichon.  It is a silly story that made M laugh so we had to read it again and again.  Good thing we started with that book on Monday, because it got her really excited about penguins for the rest of the week! 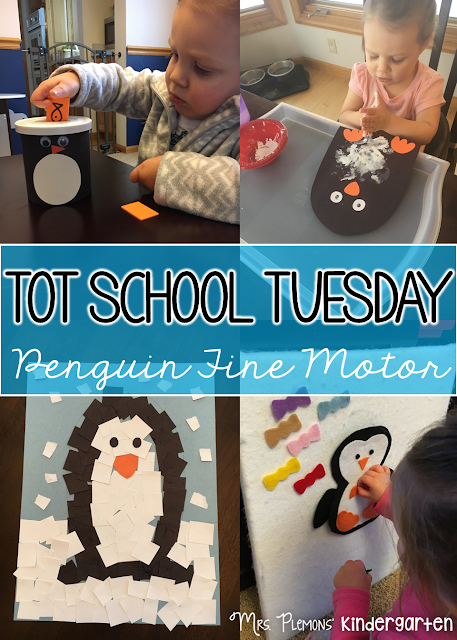 I tend to gravitate towards art projects as fine motor practice, so I tried to make sure I incorporated some other activities as well this week. Here is what we tried:
Feed the Hungry Penguin:
I grabbed an empty frosting container and turned it into a penguin with a little construction paper and googly eyes, then a small slit in the top.  I made a bunch of rectangles out of foam and then drew some little fish on each one with sharpie.  Madelynn was very serious about this activity, look at that concentration, haha. By Friday she had ripped the penguin off of the container, but at least it got great use all week. 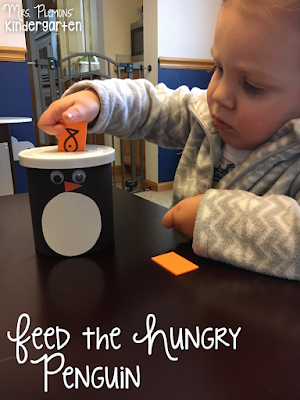 Felt Board Penguin:
I LOVE making felt boards and they are so easy to do.  I’m not a sewer so I love that I can just cut out shapes and glue them together. If you want to make your own felt board to use at home it is easy peasy! Check out my post here to see how to turn a canvas into your own felt board. We used this as a color practice activity, and M loved putting the different colored bow ties on the penguins neck and head to make a “girl” penguin. 🙂 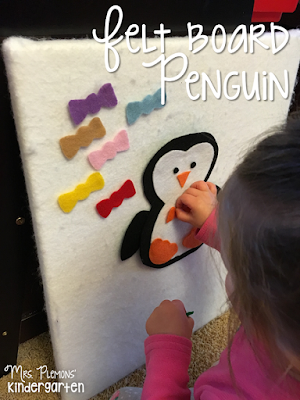 Glue Paper Penguins:
I found the inspiration for this penguin craft on Pinterest here and adapted it just a little bit for Miss Madelynn.  I knew she’d need a bit of guidance with the shape of the penguin, so I started by drawing a rough pencil outline for her to fill in.  Then I cut the paper squares for her, otherwise this activity would have taken us days! she did a great job with some guidance about where to put the colors and I love how cute the finished product turned out! 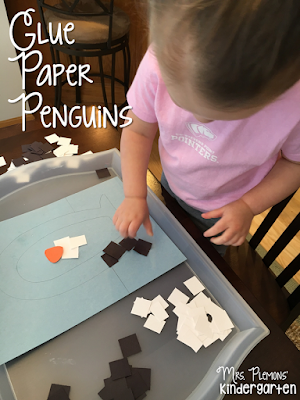 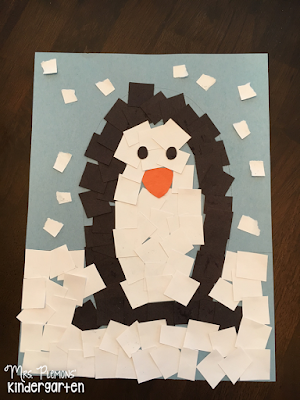 Penguin Belly Painting:
This one was pretty easy to prep. I just cut out some eyes, feet, and a beak. Then I had Madelynn glue them onto a black sheet of paper before we started painting. We started out using q tips to dab paint on the belly, but M decided it was much more fun to squish and finger paint the belly, so we wen with that and it turned out great! 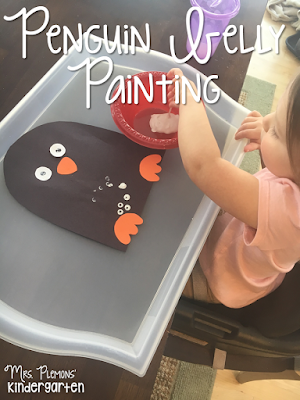 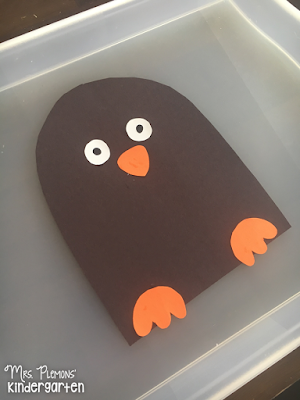 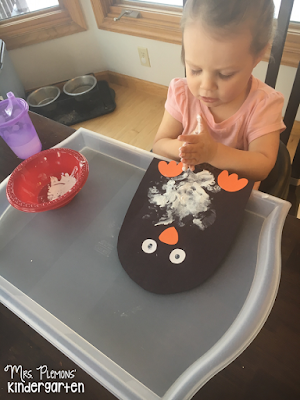 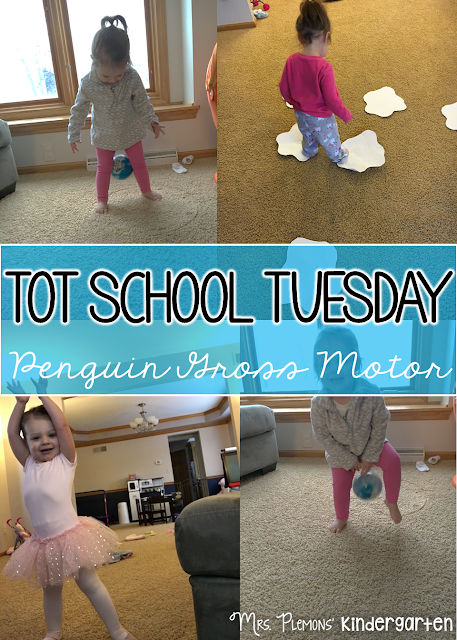 Penguin Waddle:
I wasn’t to sure how this one would go with Madelynn, but it actually was our favorite activity of the week.  Basically I had her try to hold a ball between her legs while walking to get her to “waddle” like a penguin.  Trying to keep the ball in there was pretty tricky and kept her VERY busy, plus our dog thought it was fun too and kept trying to get the ball. 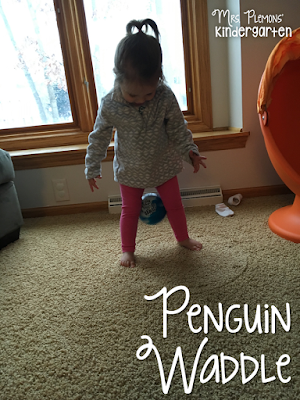 Iceberg Hop:
This one was super easy and got lots of use this week too as you can see by Madelynn’s jammies she pulled it out almost every morning after breakfast.  All I did was cut some irregular shapes out of white cardstock for “icebergs” and had M pretend to be a penguin jumping from one iceberg to the next. Lots of easy set up low prep fun! 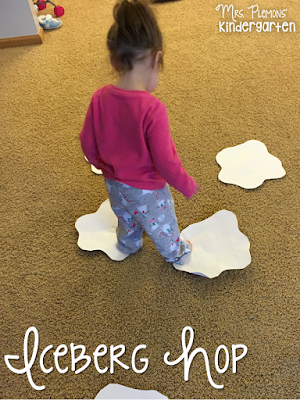 Penguin “Freeze”:
We’ve done freeze dance songs before so this one was easy for Madelynn to catch on to.  I just played some songs for our winter CD and then I’d stop it every so often and yell FREEZE. (M started ballet this week and so we squeezed this activity in after we got home hence the random tutu ;)) 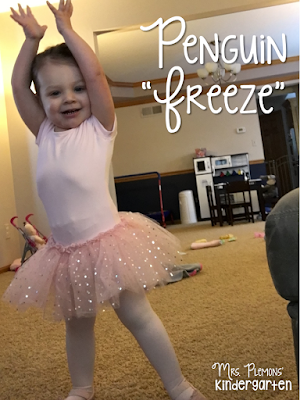 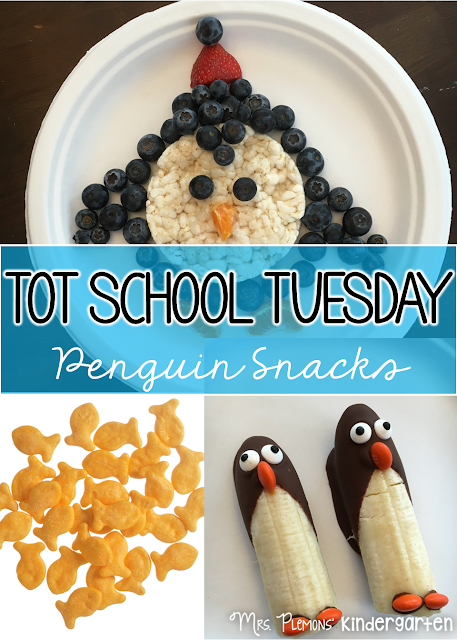 Yum!  I decided making cute snacks is one of my favorite parts of tot school because I am SOOO not a cook, but I can do cute things without much need for real cooking knowledge. This week I really only got to 2 of our planned snacks but the banana penguins were a big hit and super delicious so we did those twice!
Banana Penguins:
I found the idea for these little cuties while browsing Pinterest here. They were really easy to make so I made a few and we took them with on our road trip too! Plus I found candy eyes at Hobby Lobby this week which made their little faces oh so adorable. 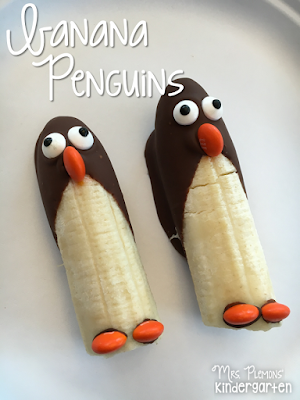 Blueberry Penguin:
I whipped this little guy up with the fruit we had in the fridge and a rice cake. Oh so easy to make, yummy, and healthy too.  Madelynn would eat blueberries by the pint if I let her, so this was a big hit with her. 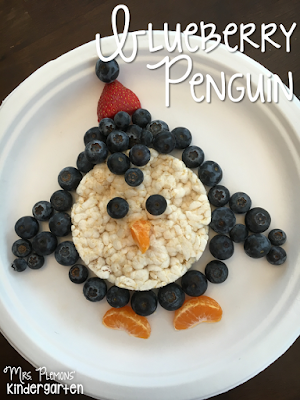 The other 2 days that I was going to make snacks we ended up just having goldfish. Penguins eat fish right? Haha, so that totally counts as themed! One day I was going to make blue jello but then realized we only had red…so goldfish it was! Then Friday we were in the car, so cream cheese Olive peguins just werent going to happen.  Here is the idea I found and was going to make if you are looking for something fun for your littles: 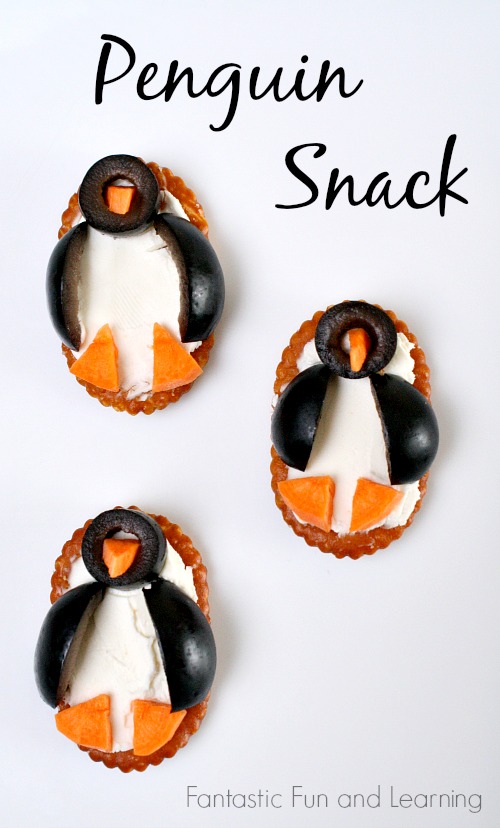 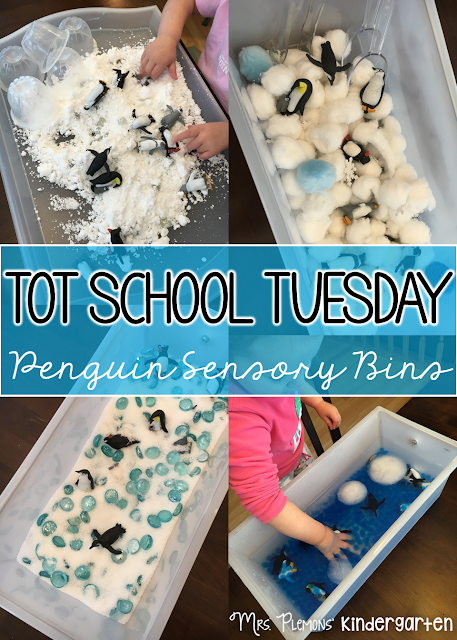 Hooray for sensory bins! These always provide a good half hour or so of fun each day, and Madelynn is getting better at keeping things inside the bin, but we are still working on that.  Thankfully I can usually just set them up in the kitchen and do a quick sweep up afterwards.  I can’t wait to make these an outdoor activity this summer!
Penguin Sensory Bin:
Our first bin this week was super easy because I just used our bin from last week, took out the jingle bells and added a bunch of little penguin figurines I found at Hobby Lobby. There are all kinds of different animal sets. You can find the penguin set on Amazon here as well. Included in this bin: cotton balls, blue pom poms, foam snowflakes, penguins, scoops, tongs. 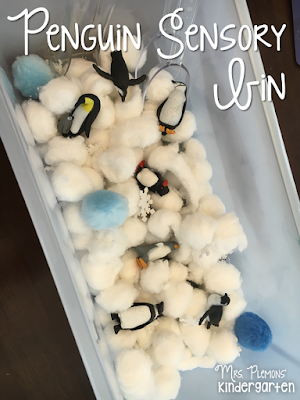 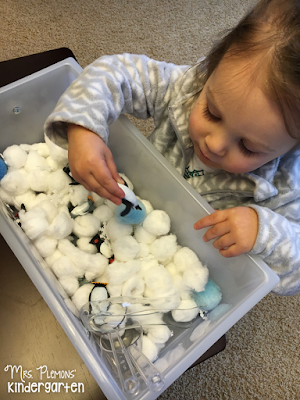 Iceberg Float:
I decided to be brave a try a water bin this week. Madelynn LOVES to splash in the tub so I’ve been nervous about water bins becoming a huge mess. Now when I say she likes to splash I mean we basically have to wear a swimsuit while bathing her or  do an outfit change afterwards! I added some blue water beads (which we had to chat a LOT about not putting in our mouth), some frozen “icebergs” that I created the night before by freezing some water in a few small bowls, and her penguins.  We had fun trying to balance the penguins on the icebergs although they mostly slid right off.  Then after the ice melted I added some cups, bowls, and scoops (and towels) for M to try to scoop out the beads, penguins and such. This bin lasted a LONG time, so much fun! 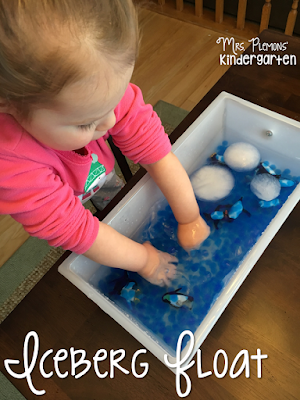 Igloo Building:
After realizing we wouldn’t really be able to use our homemade snow in the car on Friday I combined our igloo making and homemade snow activities into one.  I poured the snow onto a tray and added the penguins and igloo pieces which were empty fruit cup containers I had saved.  (I found the homemade snow recipe here.) This one got a bit outta control messy and I would probably keep the snow in a bin next time, but it vacuumed up pretty easily after we were done. 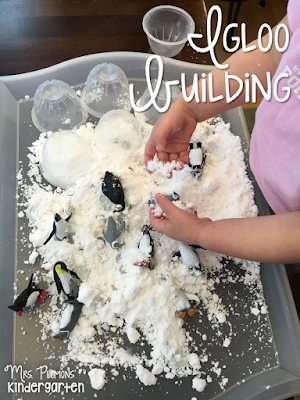 Penguin Sensory Bin:
Included in this bin: Epsom Salt, blue vase filler gems, penguins, scoops and tongs. This bin was a lot of fun but a bit messy with the salt everywhere after we were done. Madelynn liked burying and finding the penguins in the “snow.” 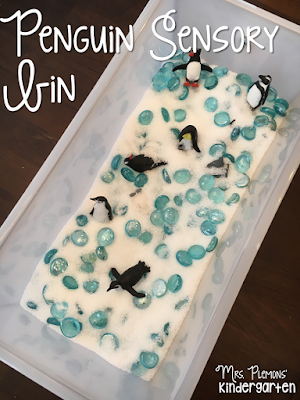 And that’s it! If you want to catch up on the other tot school posts you can check them out here:
Getting Started with Tot School
Week1: SNOW
And here’s a sneak peek at our plans for next week! 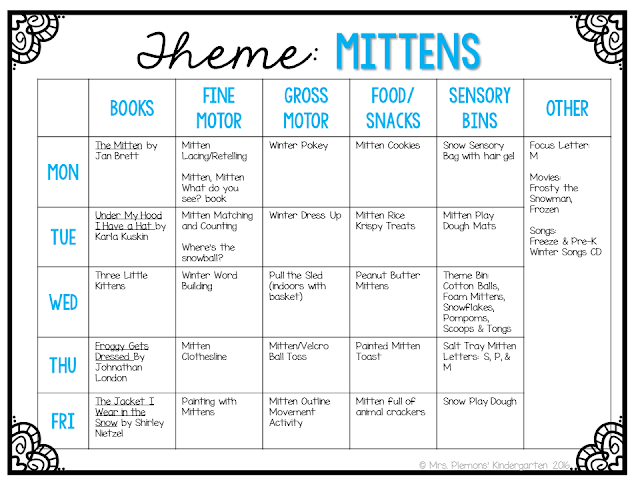