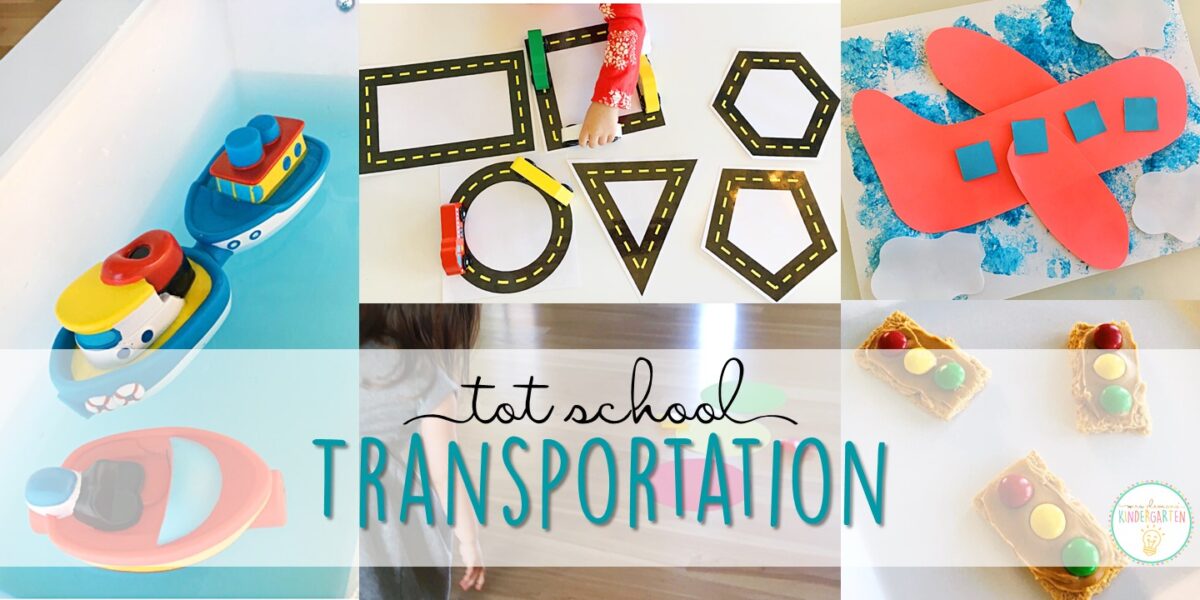 Here were our plans for Transportation Week:

Our favorite transportation books for the week were:

I’m Your Bus by Marilyn Singer
Shiver Me Letters: A Pirate ABC by June Sobel
Down by the Station by Jennifer Riggs Vetter
The Little Engine that Could by Watty Piper
Alphabeep: A Zipping, Zooming ABC by Deborah Pearson

We don’t have too many cars laying around our house with 2 little girls, so I decided to pick up this set of wooden vehicles and signs from Melissa & Doug.They were perfect for Madelynn to use to trace each of the shape roads that I made for her. You can grab a set of these shape roads here:

To go with our boat theme activities, I decided to incorporate “fishing” as a fine motor activity.  I didn’t have Madelynn use actual fishing poles, instead I let her use any of our fine motor tools to grab as many letter bead “fish” as she could.

This craft started out with sponge painting a white paper blue for the sky. After the paint dried, I gave Madelynn paper shapes to make a plane and clouds and she glued them together.

To make this train, I cut out shape pieces for Madelynn to use to build her train.  We’ve been working with her name a lot so I wrote the letters on each train car and then asked her to put them in the correct order.

Melissa & Doug are genius I tell you. They have the best toys for my girls and their reusable sticker pads do not disappoint.  They remind me of the original Colorform sets I used to play with as a kid.  They are more of a window cling than a sticker, so they truly are reusable and won’t end up stuck all over your floor and walls. This Vehicle Reusable Sticker Pad was perfect to pull out this week.

This game is part gross motor, part color matching. I cut out 3 circles from red, yellow, and green colored card stock to make a stoplight.  Then I grabbed bean bags in the same colors. Madelynn and I took turns tossing the bean bags trying to get them to land on the matching color.

This was a bit of a stretch to go along with our theme, but the goldfish does ride a bicycle in the song, haha.  Either way we LOVE Laurie Berkner and pull up her songs on You Tube all the time for a little dance party.  This song has lots of opportunity for movement and is great for getting the wiggles out.

Another Laurie Berkner song that we love that incorporates lots of creative movement.  If you haven’t introduced Laurie Berkner’s music to your toddler yet, you have to check out her YouTube channel, SOOO many fun songs to get your little ones up and moving!

For this train themed movement activity, I taped out train tracks on the floor throughout our house using washi tape. Madelynn pretended to chug along the tracks fast and slow.

Just like the classic game, we all played as kids, we played red light green light this week. Before we played we discussed that a red light means *STOP* and a green light means *GO*.  Then I used our card stock cut out circles as a visual reminder as I called out each command.  Madelynn loved running and freezing, and then took a turn leading the game as well.

Apple/Cheese Boats –  Cut up a few apple slices and balance on the peel side on a plate. Press cheese triangles onto toothpicks and stick into the apple slices for a sail.

Banana Plane w/Marshmallow Clouds – Start with a banana sliced in half the long way and place on a plate.  Add small banana slices for wings and an apple wedge for the tail.  Use Cheerios for windows and marshmallows for clouds.

Graham Cracker Build a Train – Start with 2 graham cracker rectangles, and a square for the main body of the train.  Add Wheat Chex for the smoke stack and window. Add vanilla wafer cookies for wheels, mini marshmallows for smoke, and pretzels for tracks. Cut up Tootsie Rolls for coal and place in the train car.

PB Jelly Car with Cucumber Wheels – Cut a PB & J uncrustable in half.  Add halved cherry tomatoes for wheels, halved baby carrots for a road, and carrot/cucumber pieces for the car windows and bumpers.

In the Air Sensory Bin:

In this bin: Blue aquarium rocks, cotton ball clouds, and airplanes from the In The Sky TOOB.

Okay one more Melissa and Doug Toy I love is this Magnetic towing game. (I swear I’m not being paid to promote them I just really love their stuff!) It’s basically magnet fishing and a puzzle all in one and requires lots of concentration, a great toy for building focus and the cars have numbers on them too for added number recognition practice.