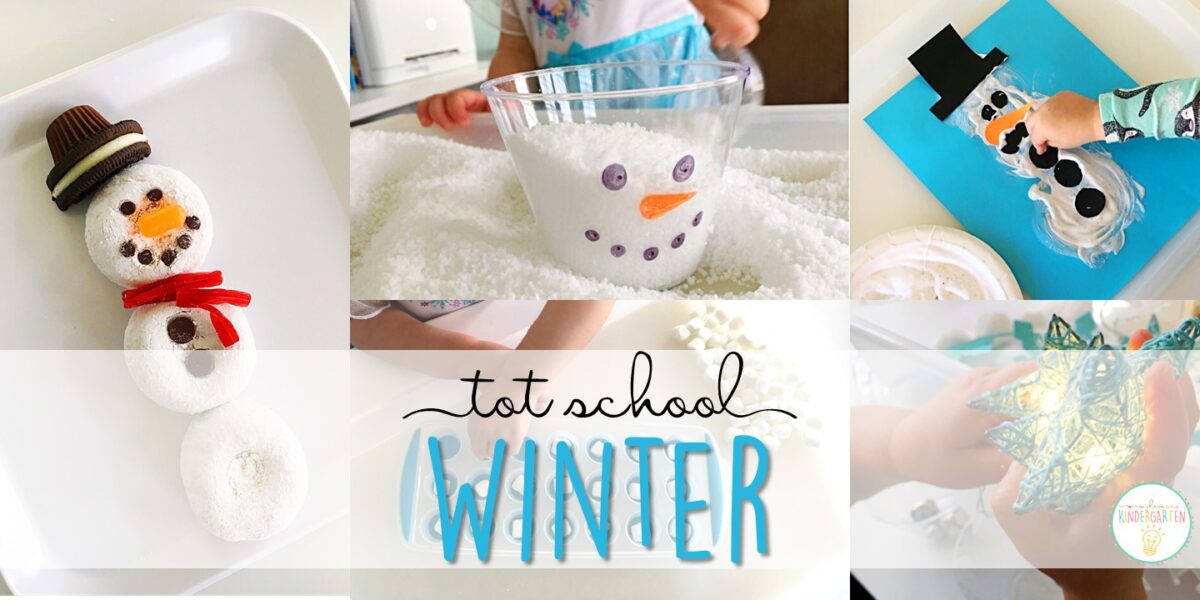 I love the holidays, but I am EXHAUSTED! I’m so over traveling, partying and never ending holiday to do lists and ready to get back into a bit of a routine around here. We had lots of snowy fun this week that I can’t wait to share with you!

Here were our plans for Winter Week:

Our favorite winter books for the week were: The Mitten by Jan Brett Under My Hood I Have a Hat by Karla Kuskin The Jacket I Wear in the Snow by Shirley Nietzel The Snowy Day by Ezra Jack Keats Snowmen at Night by Carayn Buehner

We used this little snowman last year as one of our very first tot school fine motor activities and it was a big hit so I pulled it back out this year.  The goal is to fill the water bottle with mini marshmallows. Last year we just used fingers, but now that Madelynn is a whole year older I added the tongs for her to grab marshmallows. She used them for a while and then started using her hands. Either way great fine motor practice!

Since mini marshmallows make the perfect little “snowballs” we used them for our counting tray as well. We used a mini ice cube tray and tongs then practiced counting and placing marshmallows in each hole.

This was such an easy low prep activity.  I taped 2 sheets of paper together since Madelynn’s name is nice and long. Then I wrote her name with large letters and gave her some white circle labels and hole reinforcements.  She then used the stickers to trace the shape of each letter.

In order to paint these snowmen, I used a simple DIY recipe to mix up a batch of puffy paint.

After painting, I gave Madelynn small paper cutouts to use to decorate her snowman.

I like to switch up our painting tools from time to time, and since we had all kinds of marshmallows laying around from our other activities, I thought it would be fun to use them to stamp a snowman.  Madelynn started out stamping, then used them more as a paintbrush to create her snowman. After painting we added a few felt snowflake stickers to finish our artwork.

We brought the snowball fight action indoors with this easy gross motor activity. I crumpled up lots and lots of white scrap paper and spread it around the room. Then I yelled “snowball fight” and it was game on!  The best part about using crumpled paper is that it is really hard to throw hard so no one gets hurt!

I couldn’t throw away all those scrap paper snowballs just yet, so I came up with another way to play. For our snowball toss I set out a few metal tubs for Madelynn to toss them into.  Throwing is not her favorite gross motor activity so after she got bored with that I had her hold the tub and try to catch the snowballs as I threw them.

Time to get this girl trained young that here in Wisconsin shoveling snow is a family affair.  Without snow on the ground outside, we practiced shoveling indoors with out paper snowballs again.  Madelynn scooped them up in the shovel and tried to fill the metal tub.

Of course we could build a snowman outside when we have the snow, but I mean how cute is this indoor snowman? I have an Amazon Prime addiction so we always have a million boxes laying around.  To prep this activity, I took 3 different sized boxes and wrapped then with the white side of a roll of wrapping paper facing out. Next, I wrapped a small box in black construction paper for a hat. Then, I cut out red and black circles and a carrot shape for the face  and buttons.  Finally we added a scarf for a finishing touch. Madelynn stacked the boxes largest to smallest to build the snowman, then used all of the decorations to bring her snowman to life. I even cut holes in the sides of the middle box to use wrapping paper tubes for arms!

If you have been following along with our past tot school themes, you know I love a good letter/number hunt.  This week we hunted for number snowballs and recorded them on our clipboard page as we found them.

To make the pretend snow mix together 2 cups baking soda, 1/2 cup water, and glitter in a small bowl. Pop the bowl in the freezer for a bit so it has a chilly feel to it. Don’t make the same mistake I did and forget about it though! I left the bowl in the freezer too long and the water completely froze so we had to wait a good 30 minutes for it to thaw before it was no longer a hard brick of ice.