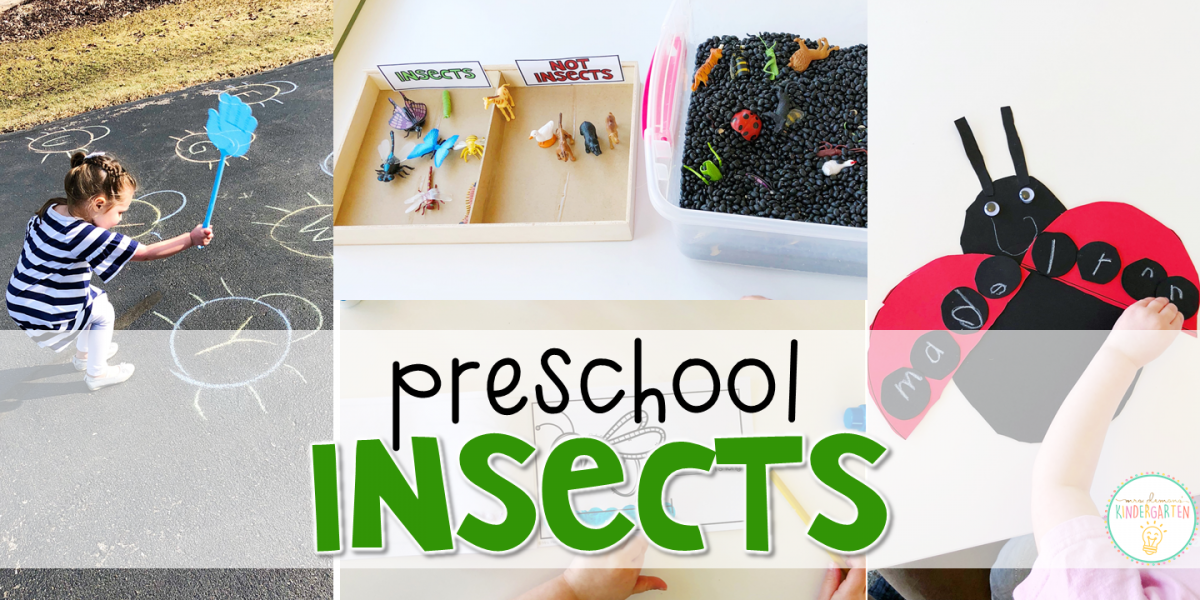 If you are ready for spring and looking for insect activities for kids, you have come to the right place.  Madelynn had a ton of fun with this week full of hands-on learning about ladybugs, bees, and other creepy crawly critters.

Here were our plans for our insect theme:

Our first book this week was Bugs! Bugs! Bugs! by Bob Barner. While reading I used picture cards to reinforce new words. Then Madelynn made an insect vocabulary book. She drew pictures to show each insect and used the picture cards and book as a reference.

Our next story was The Very Quiet Cricket by Eric Carle. Before reading we discussed and defined problem. We talked about how every story usually has a problem or something that goes wrong. After reading, Madelynn drew and labeled the problem in the story (The wanted to make a sound to respond to the other animals but couldn’t.) Then we talked about and drew how the problem was solved (He met another cricket and finally made a quiet chirping sound.)

Our next read aloud was the nonfiction book Bees by Laura Marsh.  National Geographic Kids Readers are packed with interesting information and fascinating photos perfect for preschoolers. Before reading, we talked about what we already know about bees. Madelynn drew a picture and told me that “Bees drink nectar from flowers.”  I helped record her idea on the bee KWL chart under “K” for know. Next we discussed things we want to know about bees. Madelynn drew a picture and asked “Do they have sharp stingers?” I recorded her question under the “W” for wonder. Finally we read the book and talked about our new learning. Madelynn learned that they have 4 wings and a long tongue so she drew a picture and I wrote her sentence under the “L” for learned.

Retelling the Ant & the Grasshopper:

Our next story was The Ant & The Grasshopper by Ed Emberley. After reading, Madelynn drew to show what happened in each part of the story.

Learning vowel sounds can be tricky and are usually the last letter sounds I worry about preschoolers mastering.  So for our last book this week we read this I for insect alphabet reader. I included a mixture of items that representing short and long I sounds. Madelynn identified the picture then pointed to each word as she read. Afterwards she colored all of the pictures in.

This week we focused on syllables so we started with this color by code activity. Madelynn identified each picture, clapped and counted the number of syllables. Then she followed the directions to make each spot the correct color.

Next, for more letter practice we used our dot stampers. We started out stamping inside the letter to make an I. Then Madelynn had to find the upper and lowercase i’s in the insect, stamp them and make the short “I” sound each time. Then she stamped the other letters different colors and tried to make the sounds for each one.

This week was finally nice enough to break out the sidewalk chalk.  So I came up with fun movement/learning game starting by drawing bugs on the ground and labeling each with a letter. Then Madelynn chose a CVC word card. She said the word and identified the ending sound then found and swatted the bug. We also chose a few CVC words for her to swat all 3 letters.

For this week’s name craft we created this ladybug name.  First, Madelynn cut the ladybug pieces out. Then she wrote the letters in her name on each spot. After she finished writing, she glued the ladybug pieces together in order to spell her name. Then she added a smile and googly eyes to complete the face.

For our journal this week Madelynn chose to draw what she would do if she were an insect. She said “I would be a butterfly.” So I drew lines for each word, then we worked on writing the sounds together.

Our first math activity this week was an insect themed writing tray.  I filled our wooden tray with sand. Then Madelynn used small ant hill number cards as a model to write numbers in the sand with ants or her finger.

Our new math focus for the week is measurement, so we started with this bug measurement book.  Madelynn used dot stampers to measure each bug, count and write the number of dots.

Madelynn loves playing with our balance scale, so I brought out our insect manipulatives for counting and weighing practice. Madelynn chose 2 cards and counted out the correct number of each item to compare.  Afterwards she decided which one was light and heavy.

Capacity is always a fun measurement concept for preschoolers, because they love to fill and dump things.  For our insect themed capacity exploration I filled a bin with green water beads. Then I placed insect cookie cutters on a tray. Madelynn counted out water beads to fill each insect, comparing which held more/less. She also counted out how many scoops of water beads she could fit in each insect.

For some more counting practice we played the Color Bug Catcher Game from Learning Resources. We took turns rolling the number and color die. Then we used the gator grabbers to choose the correct number of each color bug until they were all gone.

For this craft Madelynn started by cutting out all of the insect parts.  Then she glued the pieces together to form an insect. Finally, she glued the words next to each part to label the parts of an insect.

After learning about bees, we did a little hands on reinactment to show how bees transfer pollen from flower to flower.  We started with cheese balls in cupcake liner flowers (because that cheese always ends up everywhere!) Madelynn used a finger puppet bee to “drink nectar” from each flower, getting cheese “pollen” on its body in the process.  Then when she flew the bee to the next flower, pieces of pollen fell off onto the flower as it drank nectar from that flower.

For our second craft project we made a colorful caterpillar. First we cut out circle outlines and attached contact paper to each circle. Madelynn used paper, feathers, tissue paper, etc. to fill each caterpillar segment sorting by colors. Then I helped her hot glue each segment together and add googly eyes, pipe cleaner antennae and mouth.