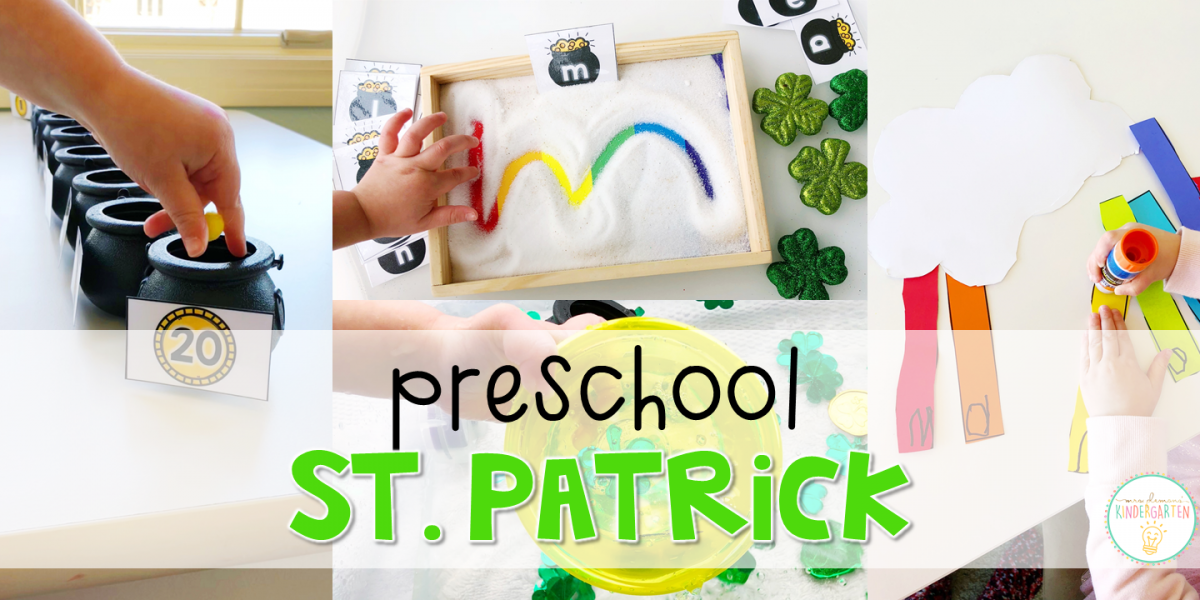 If you are looking for St. Patrick’s activities for kids, you have come to the right place.  Madelynn loved this week full of rainbows, leprechauns, shamrocks, and pots of gold! 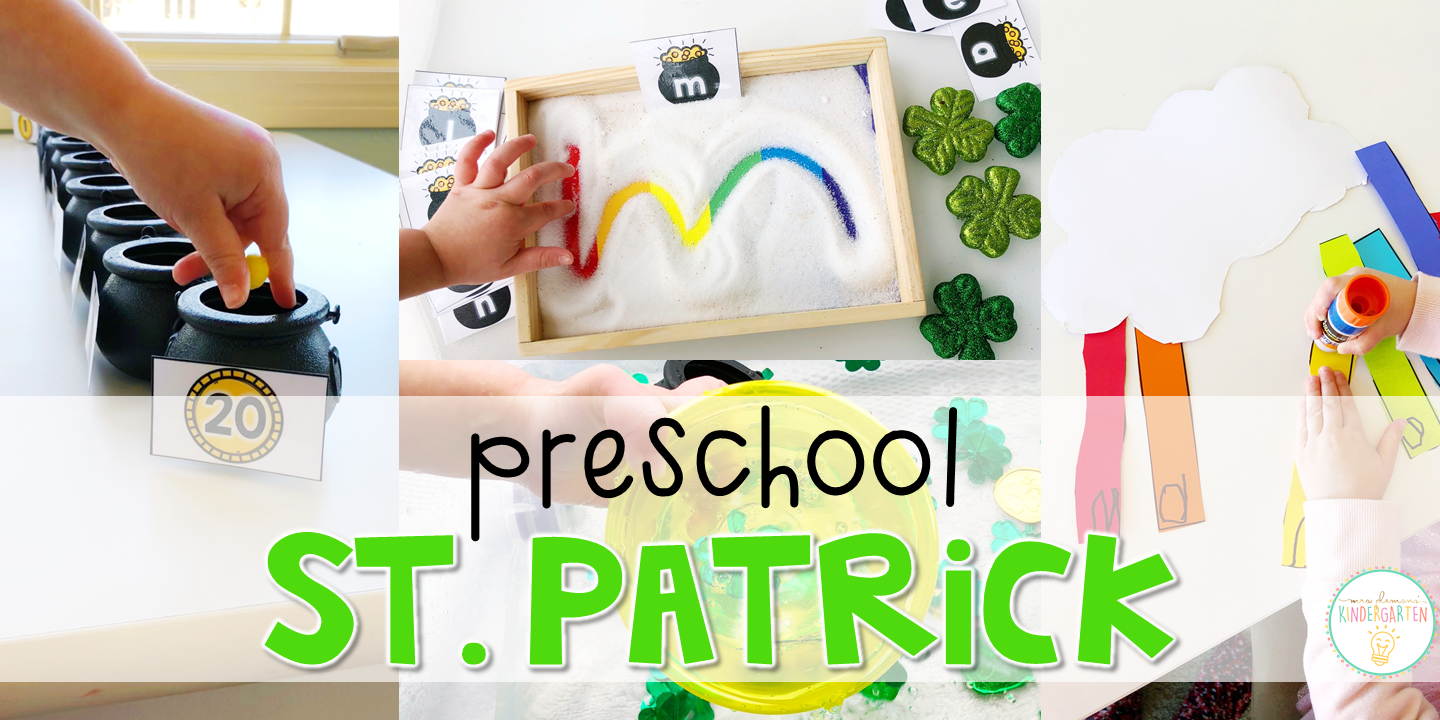 **This post contains affiliate links for your convenience. View our full disclosure policy here.**
Here were our plans for our St. Patrick’s Day theme: 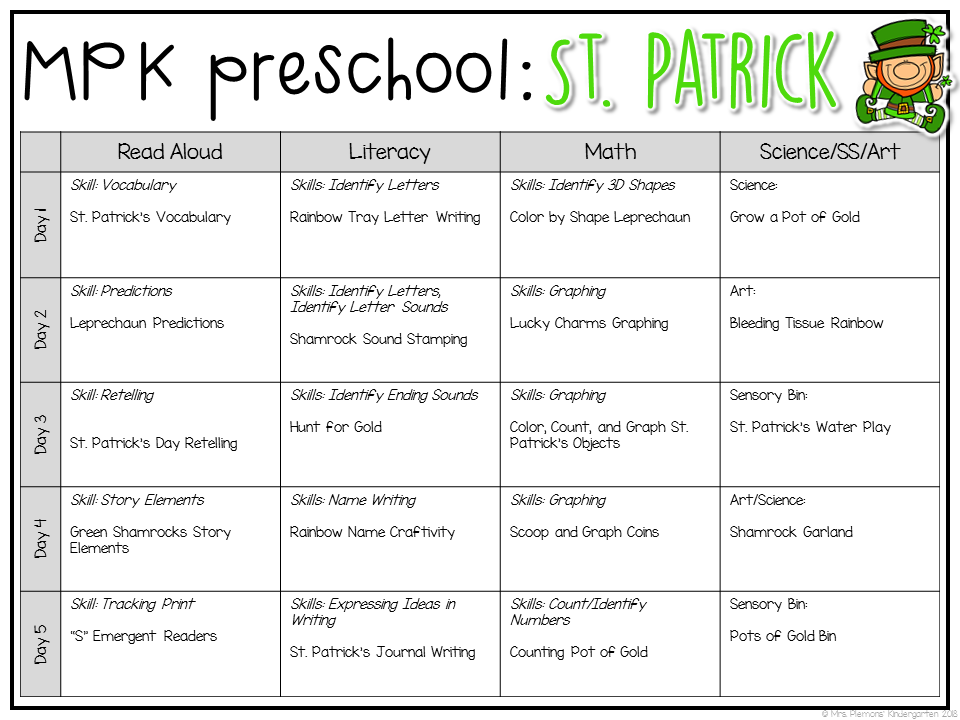 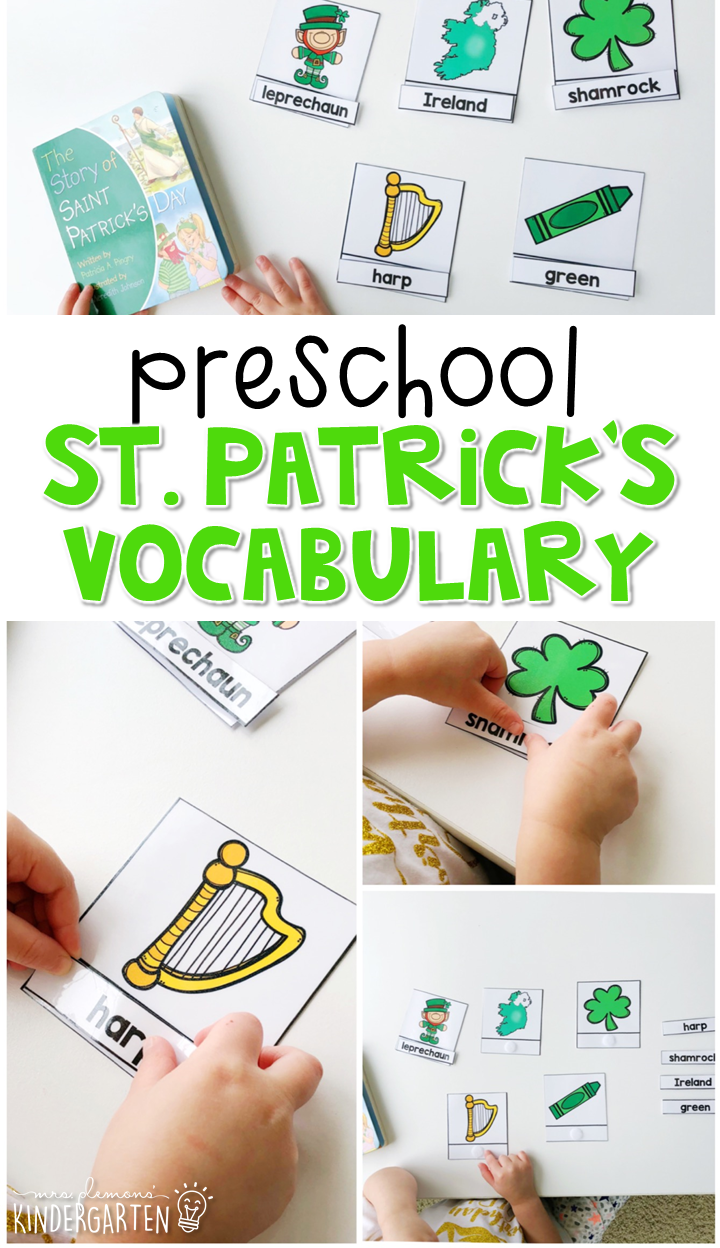 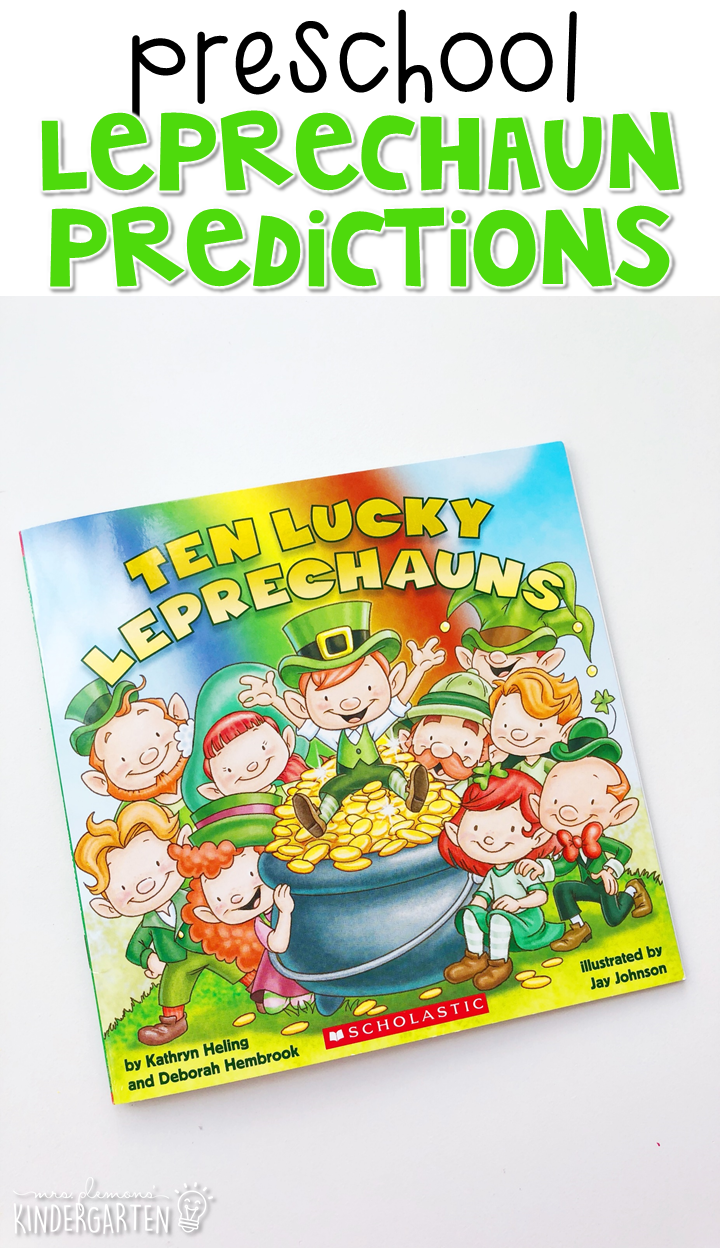 Our next story was Ten Lucky Leprechauns by Kathryn Helling. Before reading, we practiced making predictions.

I asked “After looking at the cover, what do you think this story will be about?”
Madelynn: “A leprechaun family.”
Then I asked: “What will the leprechauns do in the story?”
Madelynn: “They’re going to find some gold by the rainbow.” 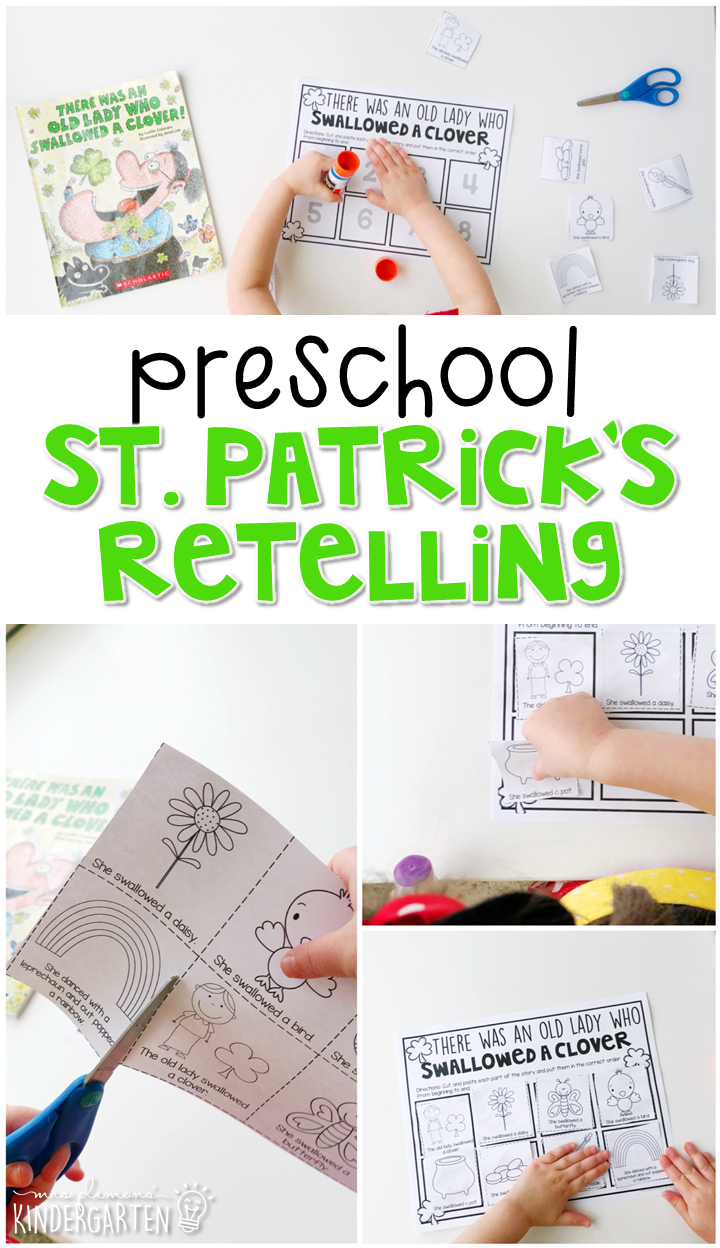 Our next story was all about our favorite silly old lady, There Was an Old Lady Who Swallowed a Clover by Lucille Colandro. We started by reading the story.  After reading, I gave Madelynn 8 pictures from the story with simple sentences underneath. We read through them all together, then I prompted her to find what happened first, second, third, etc. She glued them to her page in the correct order to retell the story. I kept the book nearby so she could check the  pages if she was stuck, and it was also an easy way to double check her work. 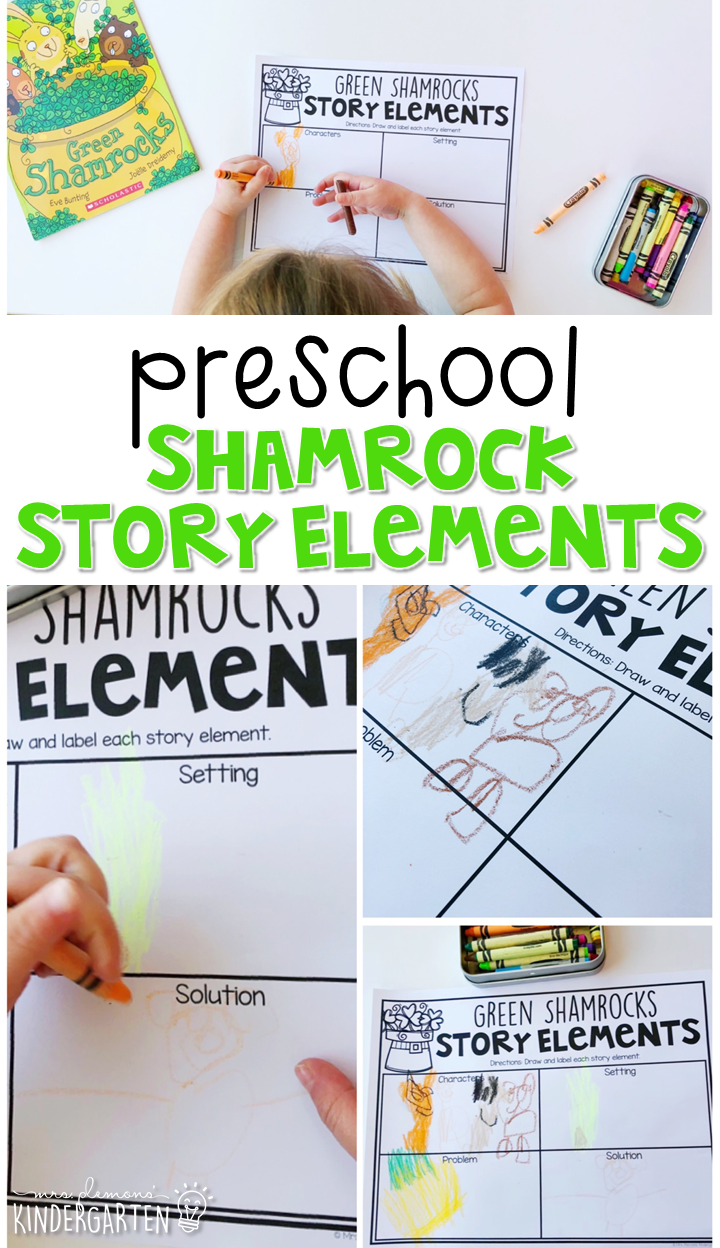 Our last read aloud was Green Shamrocks by Eve Bunting. After reading we talked about and defined the elements of a story (characters, setting, problem solution.) Then Madelynn drew pictures to show each element from the story. 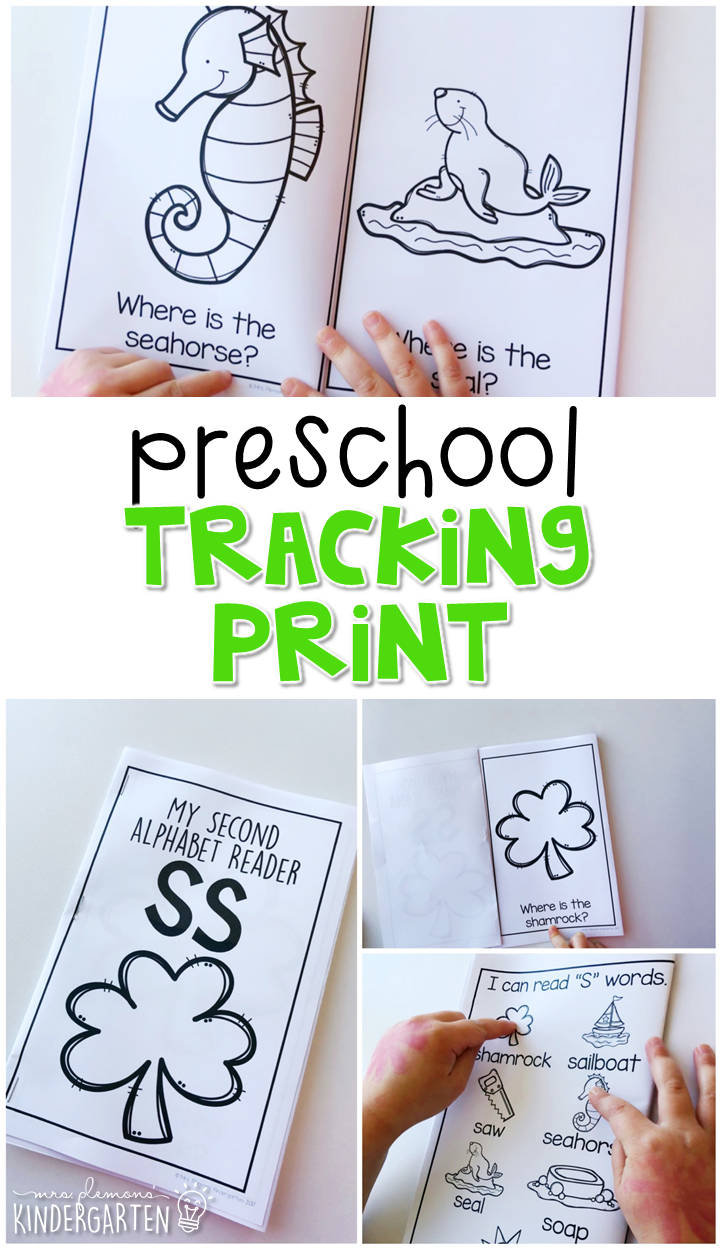 Our last book was this letter S for Shamrock alphabet reader. Madelynn identified the picture then pointed to each word as she read. Since we switched to the more difficult version she is working on learning new sight words each week. Afterwards she colored all of the pictures in. 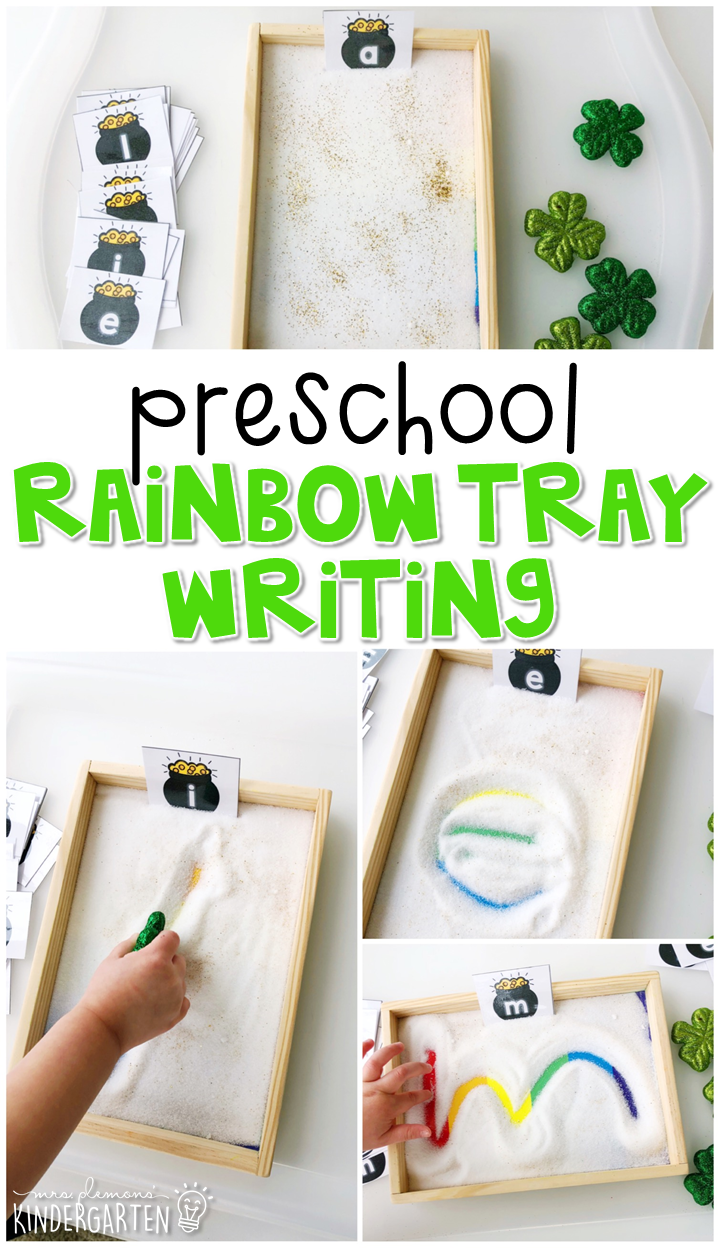 Our first literacy activity this week was a St. Patrick’s Day themed letter writing tray. To make this fun sensory activity I printed a rainbow sheet of paper and placed it in our wooden tray.  Next I poured salt and glitter on top of the paper. Madelynn used pot of gold letter cards as a model and chose which ones she wanted to practice. Then she used a shamrock and/or her finger to write letters in the salt revealing the rainbow underneath. 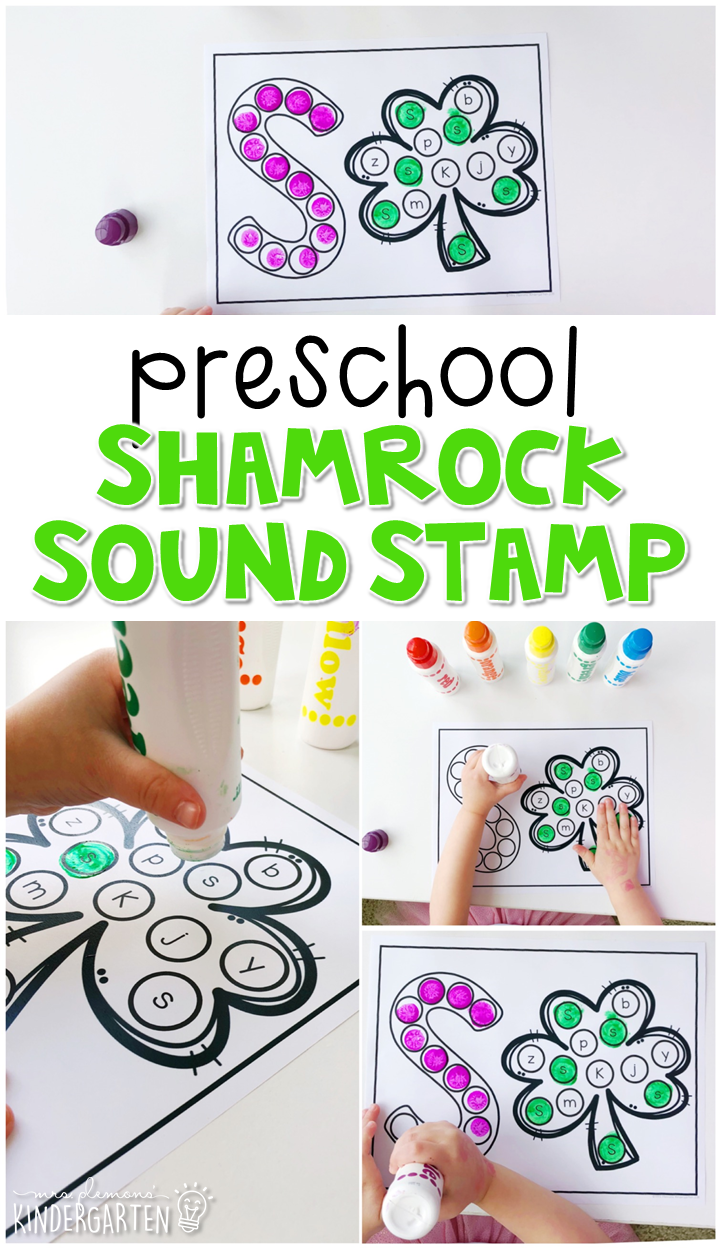 Next, for more letter practice we used our dot stampers. We started out stamping inside the letter to make an S. Then Madelynn had to find the upper and lowercase s’s in the shamrock, stamp them and make the “S” sound each time. Then she stamped the other letters different colors and tried to make the sounds for each one. 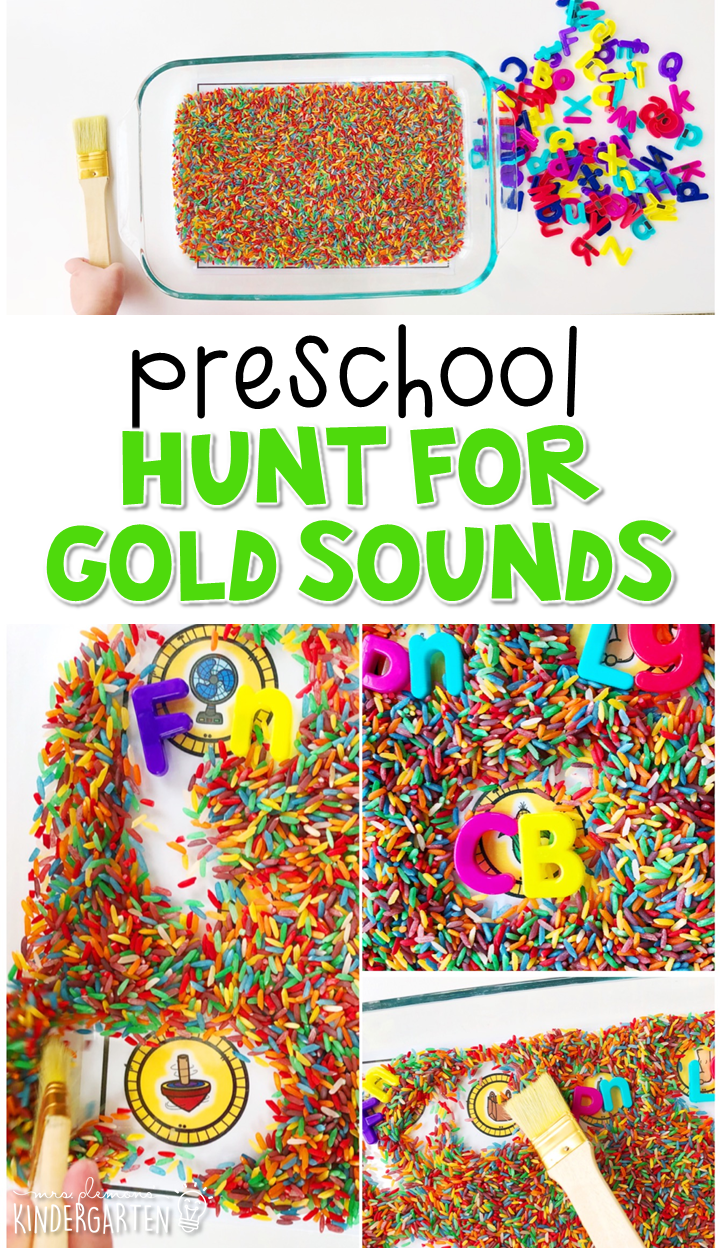 This week we worked on ending sounds with this fun hide and seek game.  I printed a page of gold pieces with pictures on them and placed the page under a clear baking dish.  Then I covered the bottom of the dish with rainbow rice. Madelynn used paint brushes to uncover each piece of gold. After identifying the picture in the gold, we worked together to identify the sound it ends with. She then placed a magnet letter on the piece to show the ending sound. 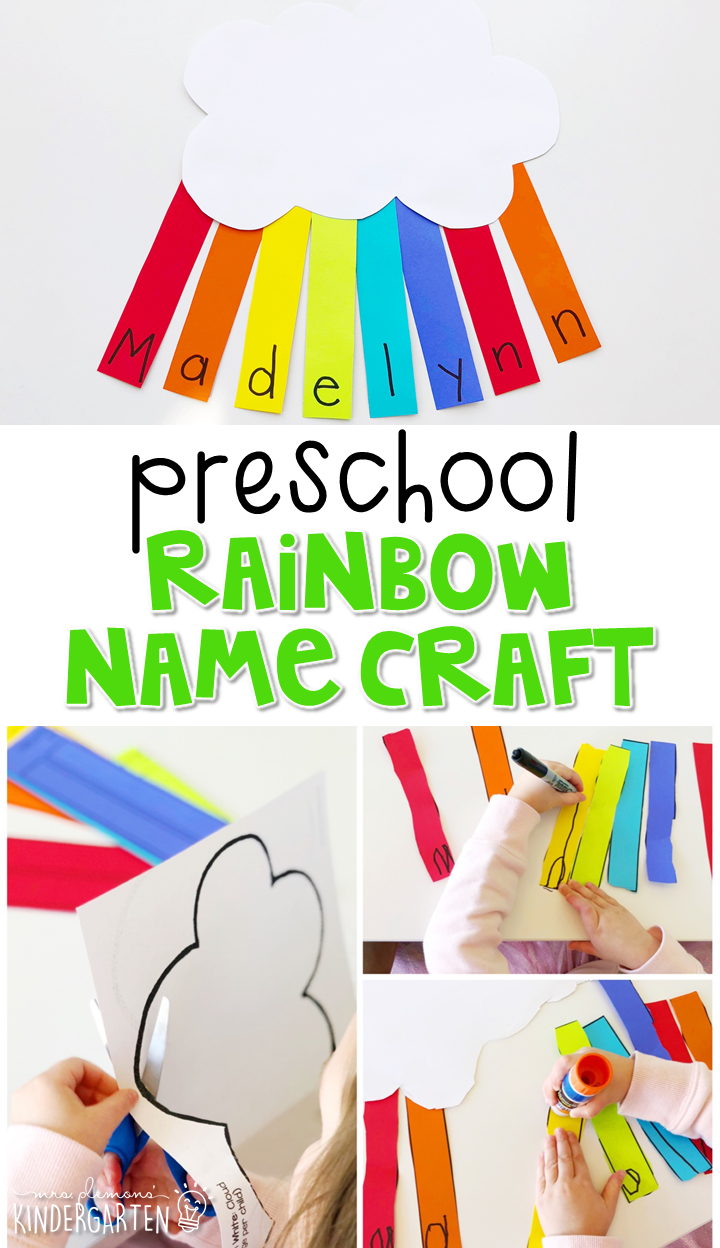 For this week’s name craft we created a cloud & rainbow. First, Madelynn cut the rainbow and cloud pieces out. Next she wrote the letters in her name on each of the rainbow pieces. Then, she glued the rainbow pieces under the cloud in order to spell her name. 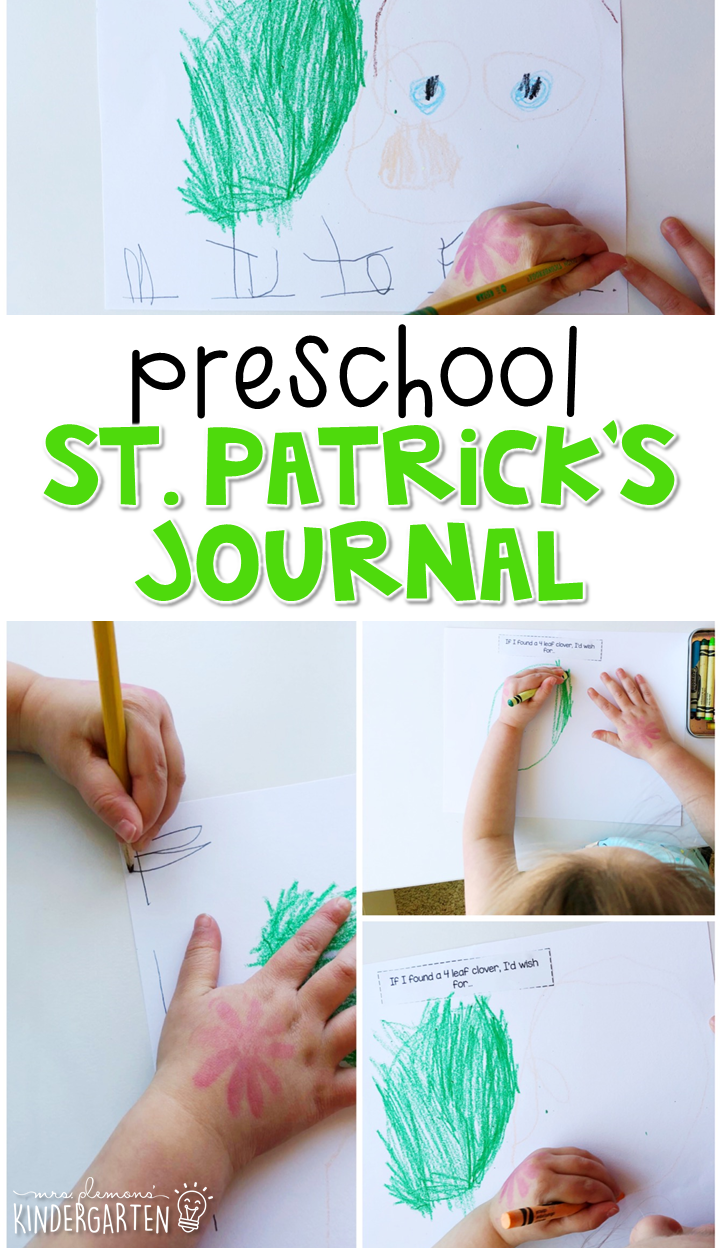 For our journal this week Madelynn chose to write about what she would do if she found a 4 leaf clover. She said she would wish for her tooth to fall out. I drew a line for each word in her sentence and she tried to write the sounds she heard in each word. I am working on getting her to write at least one or two sounds for each word with her. She usually gets the beginning sound right and sometimes the ending sounds too. 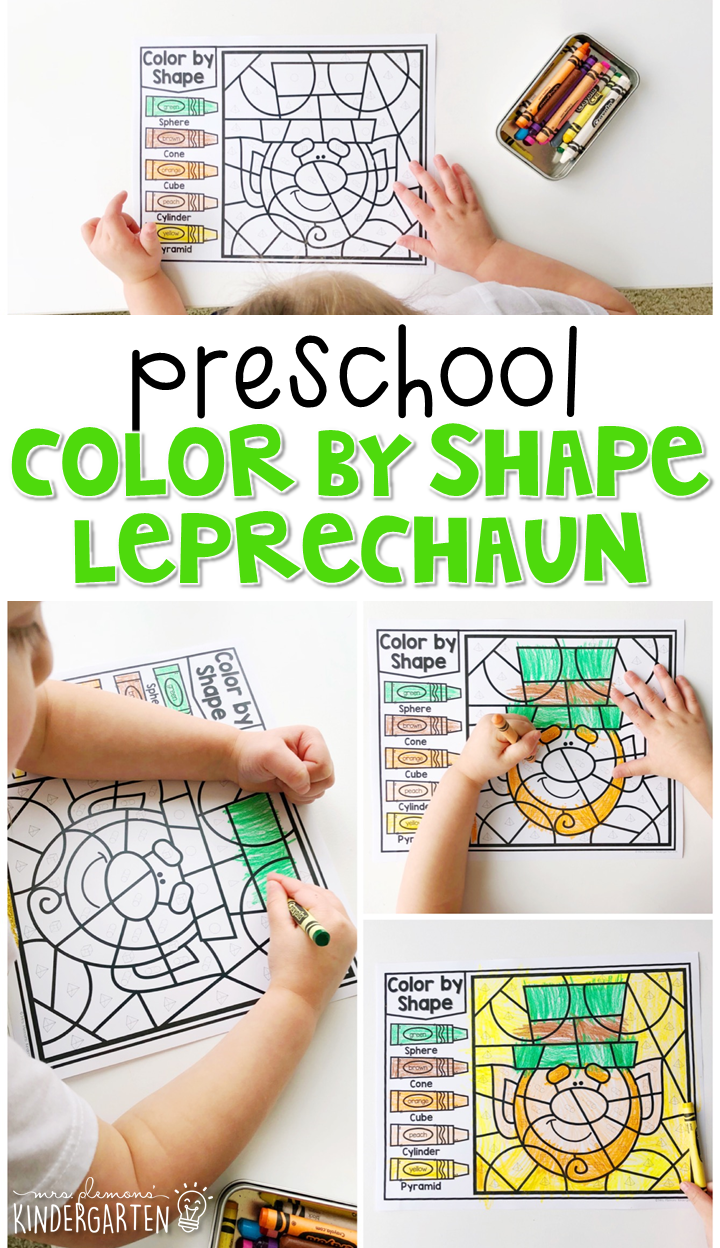 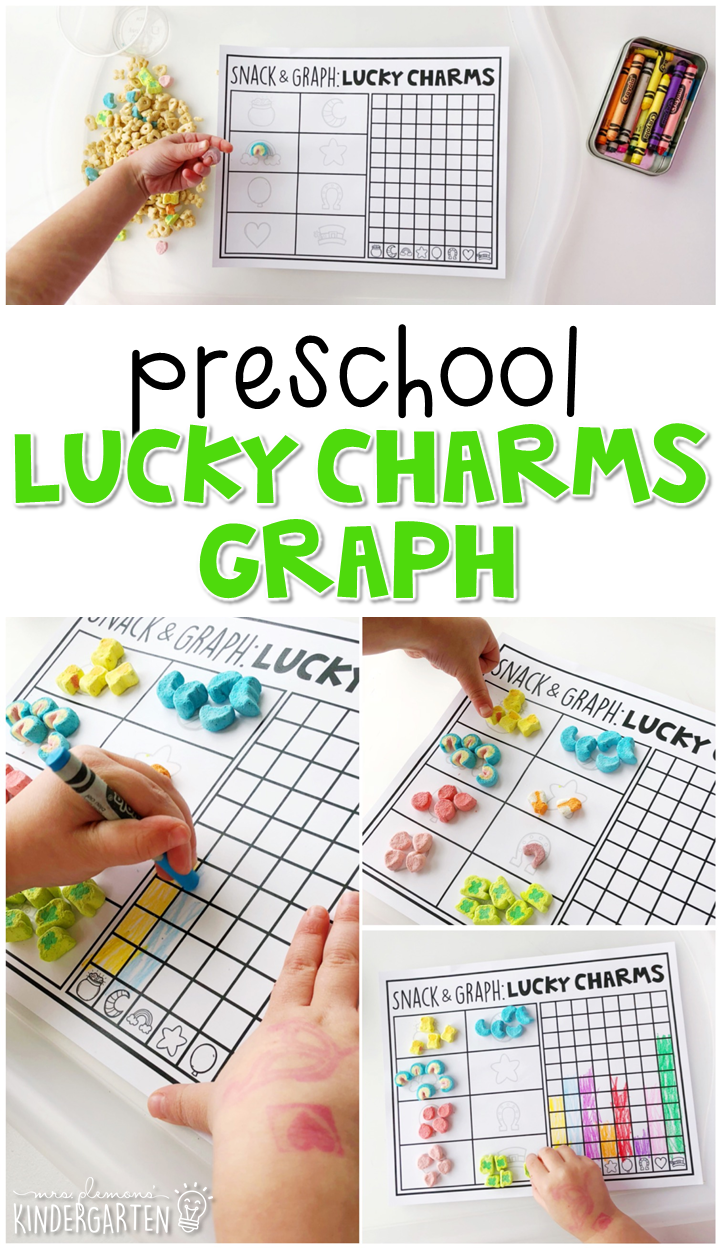 What kid doesn’t love to play with their food? Our first graphing activity was the perfect excuse to play, learn and snack all at the same time.  First, I grabbed a big box of Lucky Charms and emptied it into a large bowl.  I had Madelynn separate out the marshmallow pieces from the cereal. Then she sorted, counted, graphed and snacked. 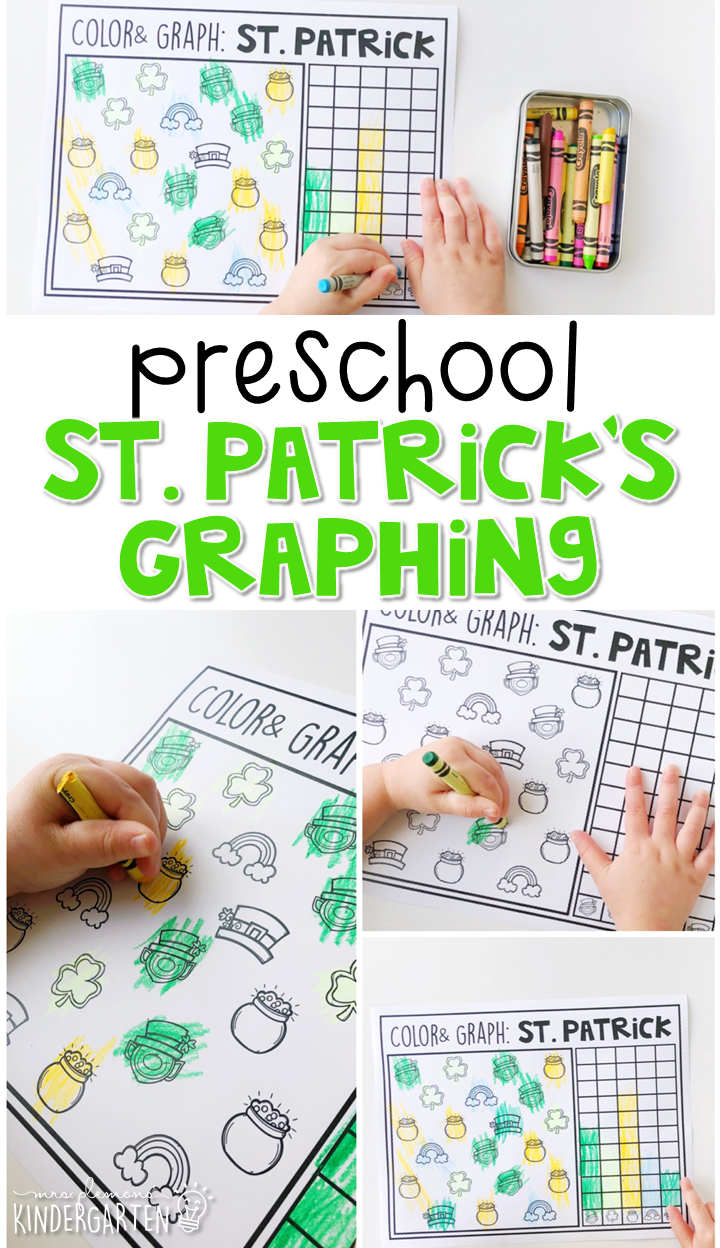 For our next graphing activity, Madelynn and I played I spy. First I said “I spy leprechauns that are green.” She then had to find the item I was thinking of, color each one, count them and color in her graph. This was a lot of steps to follow so I helped her along the way, but she really did great following along! We repeated the “I spy” game with  each item.

Our last graphing activity this week was a scoop and graph activity. I filled a bin with green and gold coins . Madelynn used fine motor tools to grab a scoop of coins.  Next she sorted them. Then she counted how many of each color and filled in her graph.  She repeated this 4 times for even more practice. 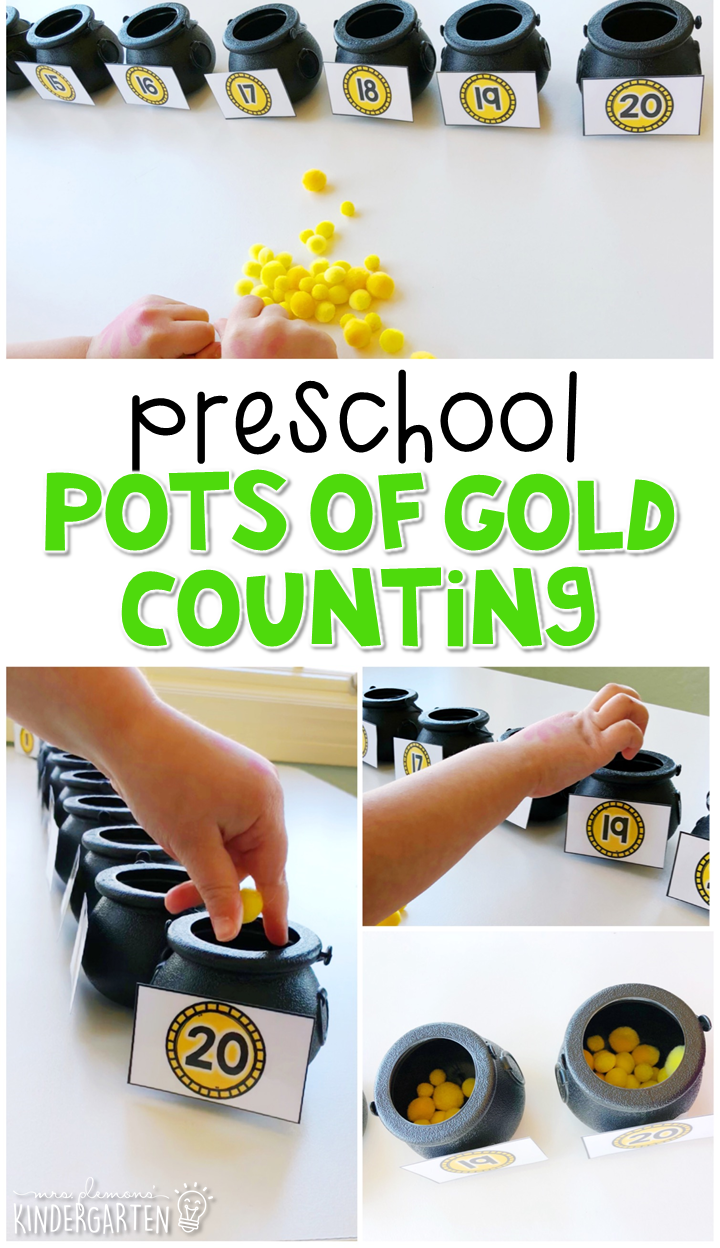 I found these ADORABLE pots and knew they’d be perfect for a counting activity.  I added a number to the front of each cauldron and Madelynn used fine motor tools to grab pom poms.  She counted out the correct number of pom poms to fill each pot. 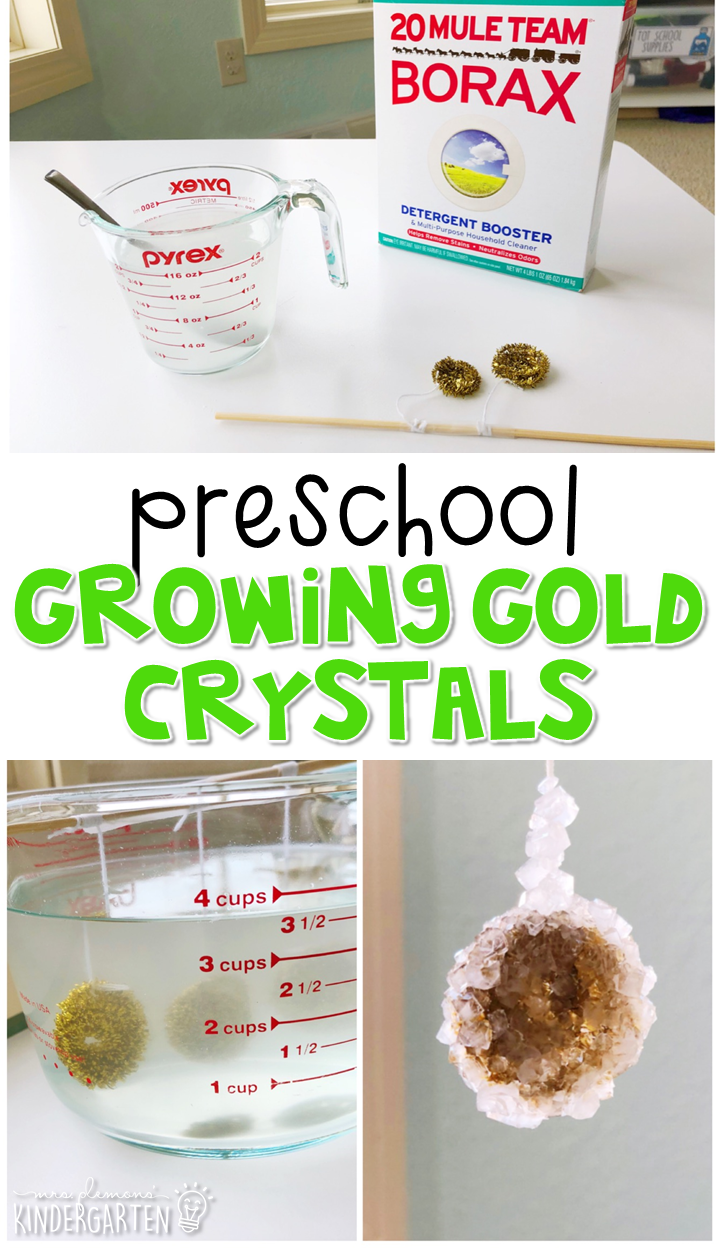 For our science experiment this week we grew crystals.  First I twisted gold pipe cleaners into tight circular coin shapes. Then tied fishing line to each pipe cleaner coin, and tied the other end to a wooden skewer. I boiled 4 cups water and Madelynn stirred in 1 ¾ cup borax until dissolved. We poured the water solution into cups and put one skewer/pipe cleaner into each cup.  Then we let the cups sit over night and allowed crystals to grow. 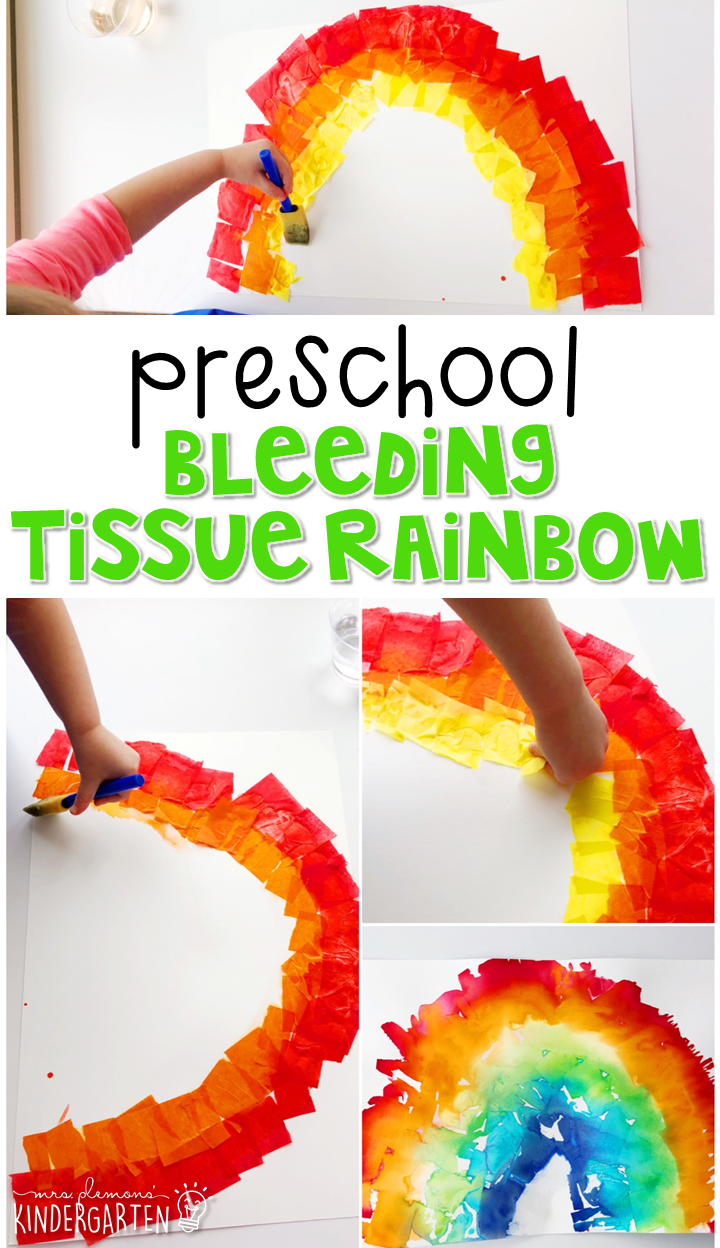 For our first craft this week we had a little fun with bleeding tissue paper.  I cut squares of bleeding tissue paper in ROYGBIV colors.  First, Madelynn painted over a sheet of watercolor paper with water. Then she laid red pieces in a large arc on the paper and painted over them with water. She repeated this with each color in rainbow order then we waited for the paper to dry. Finally we removed the tissue squares to reveal the rainbow on the paper underneath. 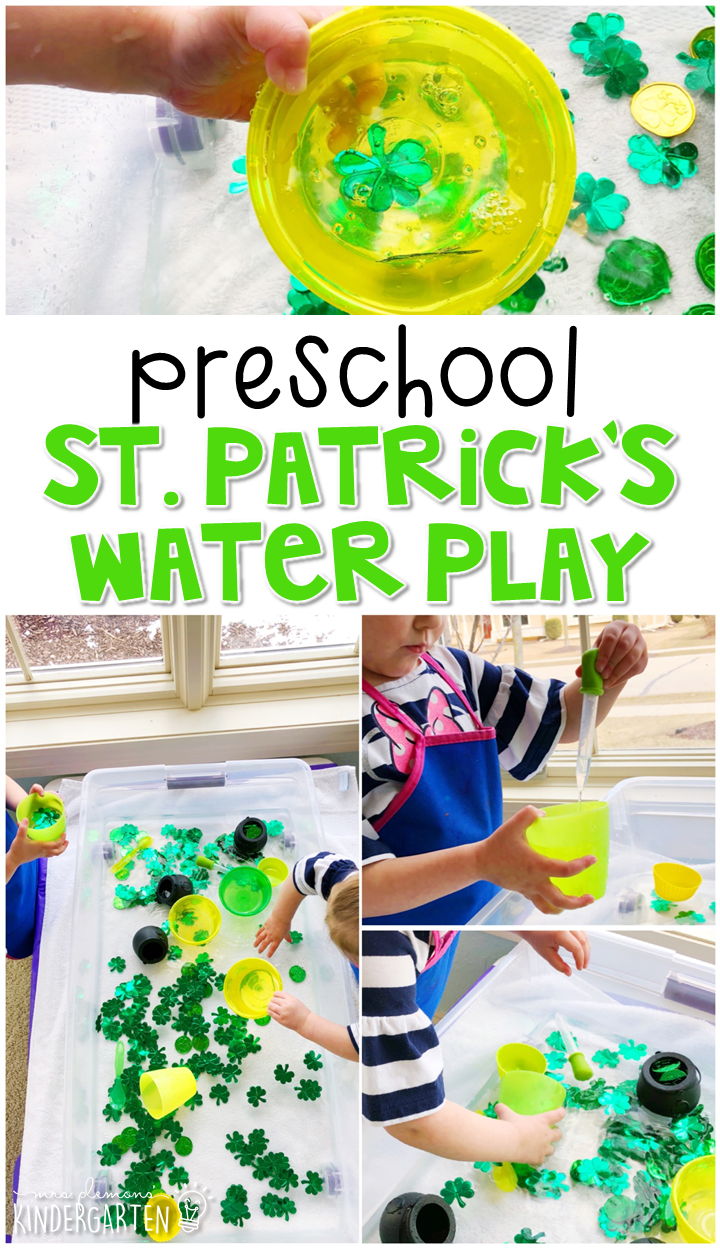 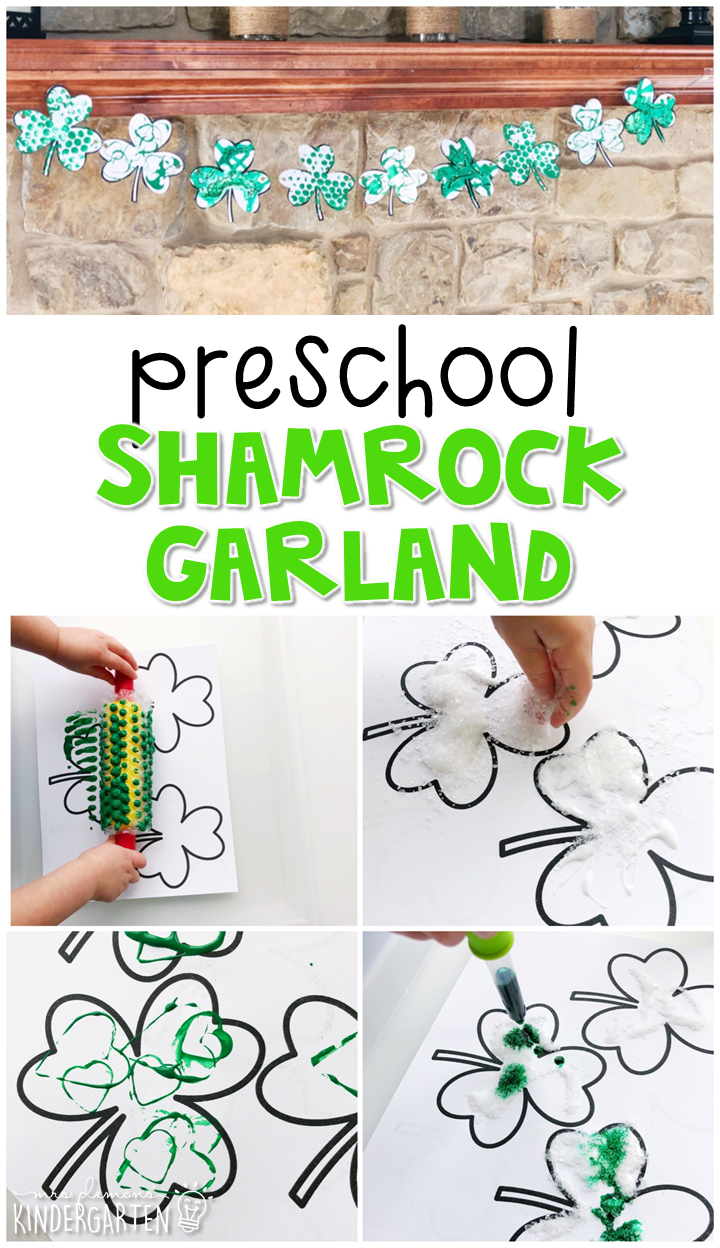 For our second craft we created a garland with multiple painting techniques.  I printed 3 copies of the shamrock outline page. Then I taped a strip of bubble wrap around a rolling pin.  On the first page, Madelynn dipped teh rolling pin in green paint and rolled it a page of shamrocks. On the second page, she used a mini heart cookie cutter to stamp green paint on the shamrocks.  And on the last page, she dripped white glue in swirls, sprinkled salt on top of the glue,  then dripped green liquid watercolors on top of the salt. After allowing all pages to dry, she cut out each shamrock. I helped her hole punch, then thread each one on a piece of twine to create a garland. 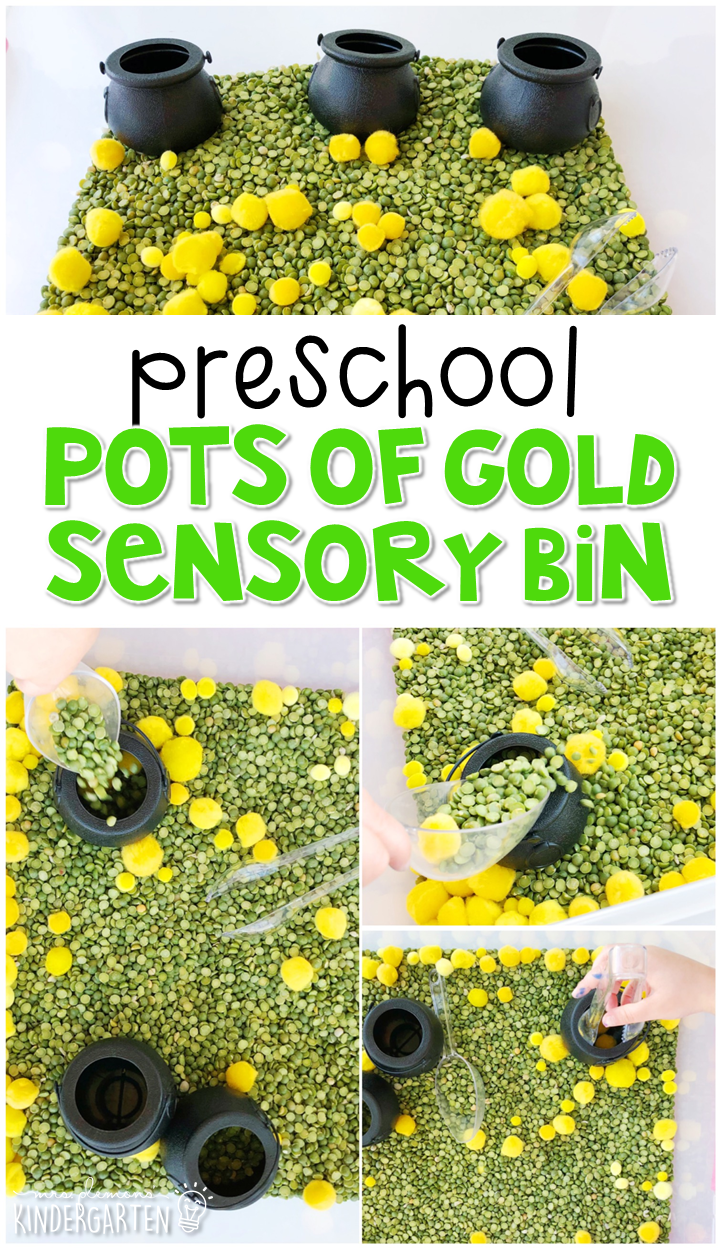 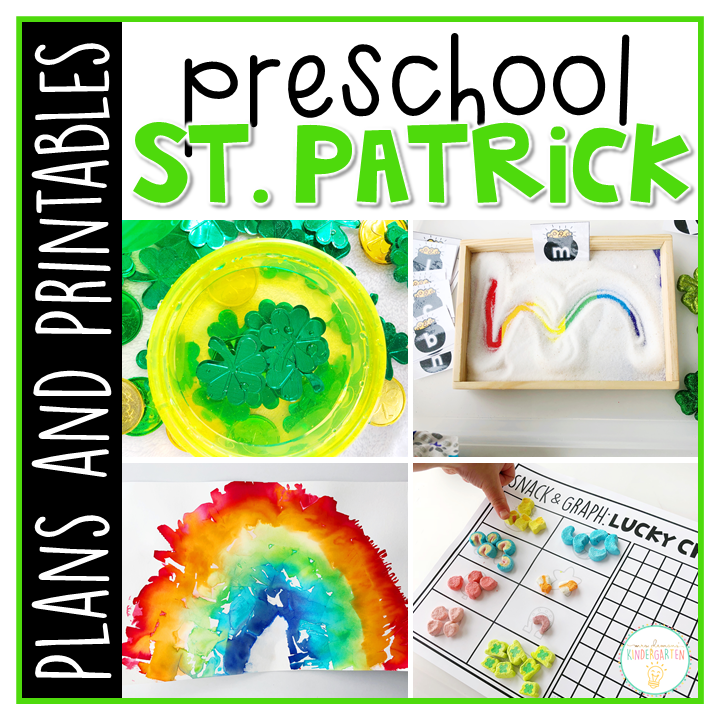