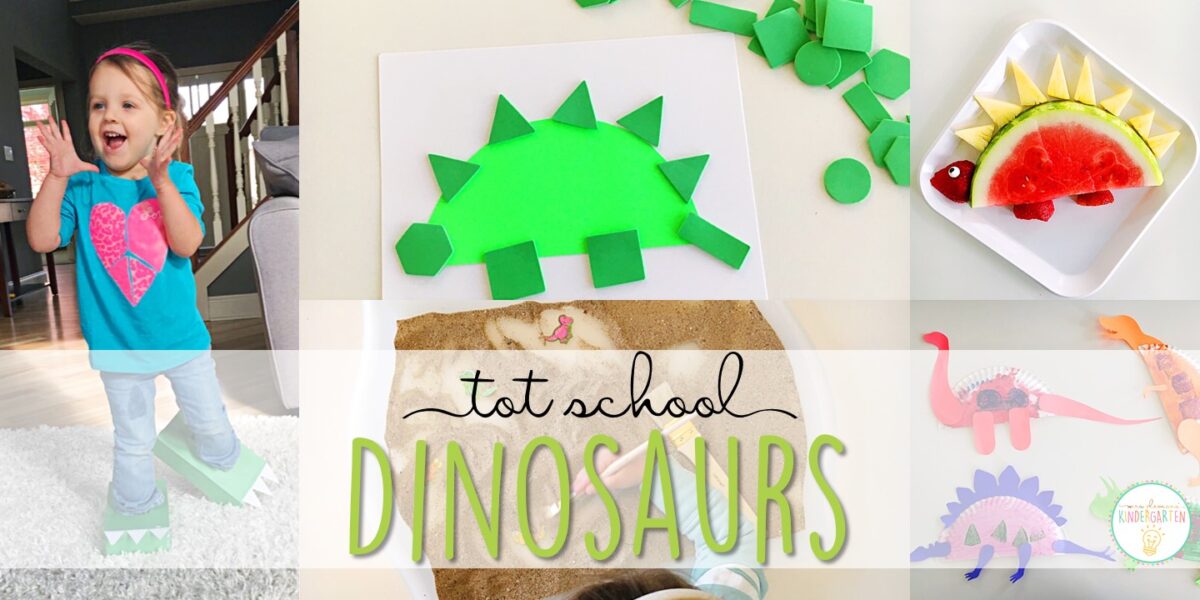 A dinosaur theme is a sure fire way to capture little one’s interest and curiosity. Just talking about dinosaurs with toddlers is so much fun! Our week was filled with names to learn, questions to answer and hands on activities to try.

Here were our plans for Dinosaur Week:

Here were our favorite dinosaur books for the week:
Dinosaurs, Dinosaurs By Byron Barton
Dinosaurs By Gail Gibbons
Dinosaur Roar! By Paul and Henrietta Stickland
Stomp Dinosaur Stomp By Margaret Mayo
How do Dinosaurs… series By Jane Yolen

Melissa & Doug have the best toys for my girls and their reusable sticker pads do not disappoint. They remind me of the original Colorform sets I used to play with as a kid. They are more of a window cling than a sticker, so they truly are reusable and won’t end up stuck all over your floor and walls. This Dinosaur Sticker Scene was perfect to pull out this week.

Digging for fossils was fun and easy with this activity. I started out by sticking some dinosaur stickers onto our clear tot school tray. Then I covered them with sand. I gave Madelynn a paintbrush and let her “dig” away!

I planned to make paper plate dinosaurs, then I found this sponge painting idea and printable templates on Learn With Play at Home. I love how cute the dinosaurs turned out. Head over to her blog to grab the templates.

These shape dinosaurs were easy to prep and make. I cut a circle out of green card stock and then cut it in half so we could make two dinosaurs. Then I gave Madelynn a pile of green foam shapes and let her glue them together to create her own little dinosaur friends.

I know I need to be better about focusing on the process rather than the product when it comes to art, so I came up with this dinosaur track painting activity. I poured a few different colors of tempera paint on paper plates, gave Madelynn some dinosaur counters, and let her stomp tracks all over the paper.

We LOVE Laurie Berkner in our house and watch her music videos on You Tube often. One of our favorite songs is “We Are the Dinosaurs” and Madelynn loves to march around when we listen to it. To make the song extra special this week I made dinosaur feet out of tissue boxes and colored paper for her to wear while stomping to the beat.

This activity was essentially an Easter egg hunt around our house, but with dinosaurs hiding inside each egg instead of Easter candy and treats. Madelynn had fun collecting and counting all of the different dinosaurs in her basket.

For this game I started by cutting out dinosaur footprints from colored card stock.  I wrote a letter on each one from a-z.  I placed them in a circle and then turned on some music. When I stopped the music Madelynn had to stop and try to name the letter that she was standing on. Great for alphabet recognition and movement at the same time.

After reading Stomp Dinosaur Stomp By Margaret Mayo, we pulled out our eggs for another hunt activity. This time I hid the actions from the story inside each of the eggs and hid them. When Madelynn found them she had to act out each dinosaur action.

We used the same action cards from the story again for this Simon Says type activity. Madelynn doesn’t quite get the concept yet, but we have been trying out several themed Simon says games. I picked a card and then called out the action for her to follow.

Fruit Dinosaur – Cut slices of watermelon, pineapple and strawberries. Build a dinosaur with the shapes.

Dinosaur Quesadilla – Use a dinosaur shaped cookie cutter to cut 2 tortillas into dinosaur shapes. Sprinkle cheese on one tortilla. Place the other tortilla on top. Microwave for 20 seconds.

Cheerio Volcano – Mix 1/4 cup sugar and 1/4 cup corn syrup in pan and bring to a boil for 1 minute. Remove from heat, add 1/4 cup peanut butter and 1/4 tsp. vanilla to pan and mix until smooth. Add 1 1 1/4 cup Cheerios and mix until coated. Drop mixture onto waxed paper and mold into volcano shapes. Allow to cool then top with red icing.

Dinosaur Bones – Push mini marshmallows onto either end of pretzel sticks. Melt white candy melt in the microwave for 1 minute. Dip pretzel “bones” in white melt then place on waxed paper to harden.

Making dinosaur fossils in play dough kept Madelynn SUPER engaged. She liked seeing all the shapes she could make with the feet, tails and bodies. We used the same TOOB dinos from our sensory bin so we would have a good variety.

This actually turned out to be a lot more work than I had planned because little did I know most of the plastic eggs we have in our house have holes in the top and bottom… After a failed attempt at filling and freezing the eggs I taped up the bottoms and around the seam of each egg. Then I added a dinosaur counter and filled each egg with water from the top hole. I placed them in containers to freeze upright overnight.  The next morning I struggled to open each egg, so I gave Madelynn a container of warm water to bathe each egg in so I could melt them a little to open them. After freeing a few eggs, Madelynn began to excavate the dinosaurs with her play hammer, and screwdriver while I tried to save the other eggs before they completely thawed…In the future, I may just freeze them in a silicone cupcake pan. Not egg shaped, but definitely WAY easier to get them out!

In this bin: chocolate “oobleck,” rocks, TOOB dinosaurs, and rocks. Start with 1 cup water in a bowl. Add 2 cups cornstarch a bit at a time and sprinkle a few spoonfuls of unsweetened cocoa powder in as well for color and scent. Stir with a spoon (or I find it’s actually easier to use your hands for this one) until you reach a gooey consistency. Add dinosaurs and rocks and explore!