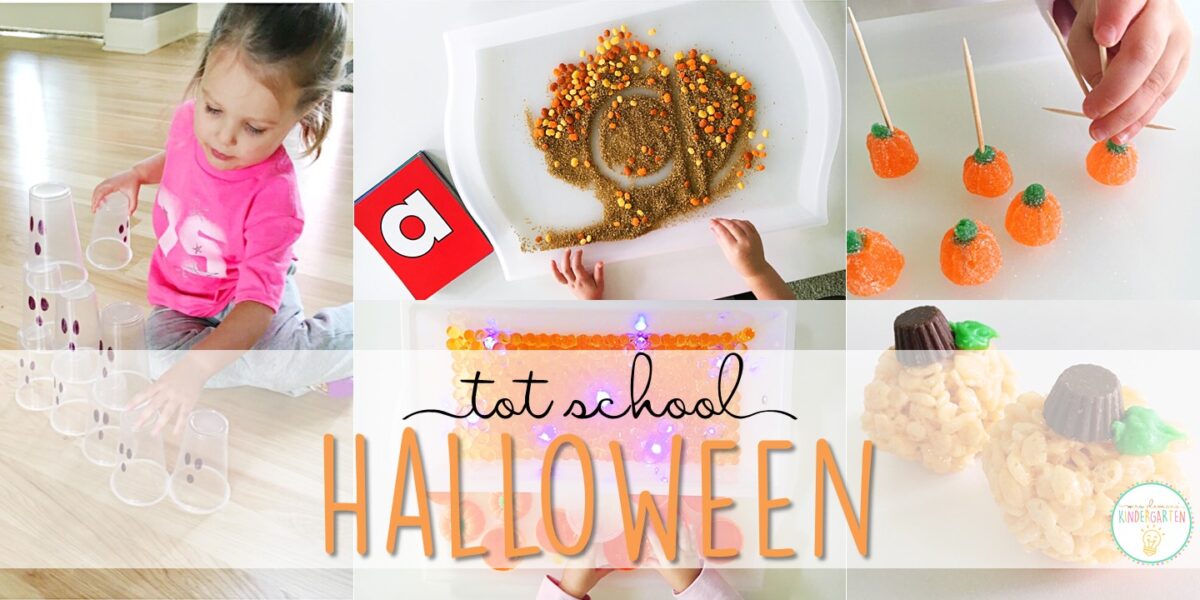 Well Halloween has come and gone and I can’t believe it is already November 1st! That means in less than a month my big girl turns 3!

As she continues to grow and learn, I am going to be trying to find new skills for her to practice in Tot School while continuing to mix in lots of fun play ideas for the rest of this school year.

Here were our plans for Halloween Week:

Pumpkin Pumpkin By Jeanne Titerington
I Like Pumpkins By Jerry Smath
The Legend of Spookley By Joe Troiano
The Little Old Lady Who Was Not Afraid of Anything By Linda Williams Skeleton Meets the Mummy By Steve Metzger
Room on the Broom By Julia Donaldson
Big Scary Monster By Thomas Docherty
National Geographic Kids: Halloween By Laura Marsh

Madelynn loved stacking, poking (and eating) these little jelly pumpkins. I encouraged her to make 2D shapes and 3D structures as well as to see how tall of a tower she could make.

I found these pumpkin silicone molds at the dollar tree and thought they’d be fun to use as play dough molds.  Madelynn ended up only using them a few times before deciding to just roll and squish her own pumpkins, but it was a nice invitation to play.

I’ve been working with Madelynn more on lowercase letters and she isn’t quite ready for writing some of them yet so I am focusing on building letters in lots of different ways.  This week we used pumpkin erasers to fill in the inside of each letter to make her name.

For this letter writing activity I spread out fall sprinkles on a tray. We have been working on writing the first 2 letters in her name and looking at the shapes in the letters.  She is doing a great job with M, and a if I show her a model to look at.

Play dough alone is fun and engaging but along with lots of interesting materials it can transform into a totally new activity.  To build our monsters we used colored play dough, cut up pipe cleaners and straws, pony beads, and googly eyes.  But you could definitely add any fun things you have laying around for this activity. This was such a fun activity for the whole family! Since Madelynn loved this activity during our normal Tot School time, I pulled it out again after dinner for some more creative fun.  Even Aubrey got to squish her hands in the play dough for a few minutes (until she tried to eat it).

This game was really hard to photograph because we literally did it in our pitch black basement playroom.  All I used was a pumpkin with a good sized stem and several glow necklaces.  I had Madelynn stand back a foot or so and try to toss them onto the stem. Lots of great throwing practice!

For this game I scattered small plastic pumpkins around the room and placed a basket on one side of the room. Madelynn had to pick up each pumpkin, balance it on her head, walk to the basket, and try to drop it in without touching it.

This pumpkin hunt was all about getting some exercise! I printed out some actions and hid them inside plastic pumpkins.  Then Madelyn had to both hunt for the pumpkins, getting her to run around the house, and then do the action inside.  Tiring out this toddler is tough work!

For this gross motor activity I drew ghost faces on clear cups and stacked them in a pyramid.  Then I gave Madelynn 3 of the plastic pumpkins from the previous activity and had her throw them to try to knock down the pyramid.  After she did that for a while and watched me stack up the ghosts she decided she wanted to try that too and was happy to stack and knock down independently for a while. I love when she is able to entertain herself!

For this activity, I rolled out a large sheet of white paper on the floor and taped it in place. Then I wrapped Madelynn’s feet with bubble wrap. Then I had her step in paint and stomp on the paper to pop bubbles and make tracks. She had fun making a WHOLE lot of noise with this one!

Jack O’ Lantern Quesadilla – Use a pumpkin shaped cookie cutter to cut 2 tortillas into pumpkin shapes. Sprinkle cheese on one tortilla. Use a knife to cut out shapes for the eyes, nose, and mouth on the other tortilla & place on top. Microwave for 20 seconds.

Ghost String Cheese – Use a black sharpie to draw a ghost face on the outside packaging of an individually wrapped string cheese.

Clementine Pumpkins – Peel a clementine. Push a green Mike & Ike (or other green candy, celery, or kiwi) into the top to make a stem.

In this bin: Orange and black paper shreds, orange pom poms and miniature pumpkins.
I gave Madelynn a pair of plastic tongs and had her search through the bin to find all the “baby” pumpkins as she called them.

In this bin: Waterproof LED tea lights, orange water beads, plastic pumpkins, and scoops.
I love how these lights make water beads even more exciting.  We scooped and filled the pumpkins with the beads and lights.

In this bin: Black beans, pumpkin candy
I love how simple this bin is. I just used black beans and mini candy pumpkins for Madelynn to scoop and play with. Sometimes simple sensory bins are the best!

In this bin: Water dyed with purple food coloring, spoons, whisks, measuring cups, and googly eyes.
Madelynn is always taking out the measuring spoons and cups from the kitchen to play with so I gave her a set to use for this sensory bin to pretend she was cooking her monster soup!

In this bin: orange ring pasta shapes, Halloween mini erasers, sorting tray, scoops
I used the dyed orange pasta from last week and changed out the “bat” pasta for Halloween erasers. Then I gave Madelynn a variety of scoops and tools along with a sorting tray to explore. 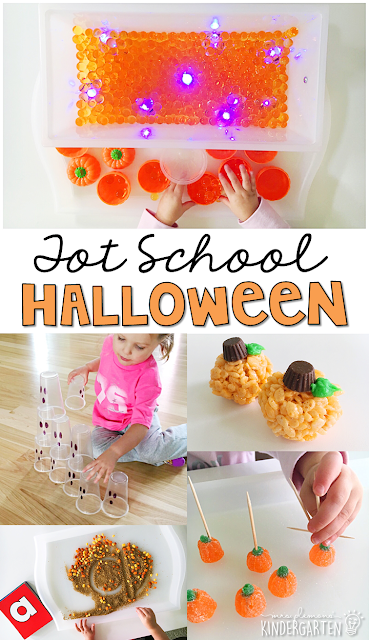