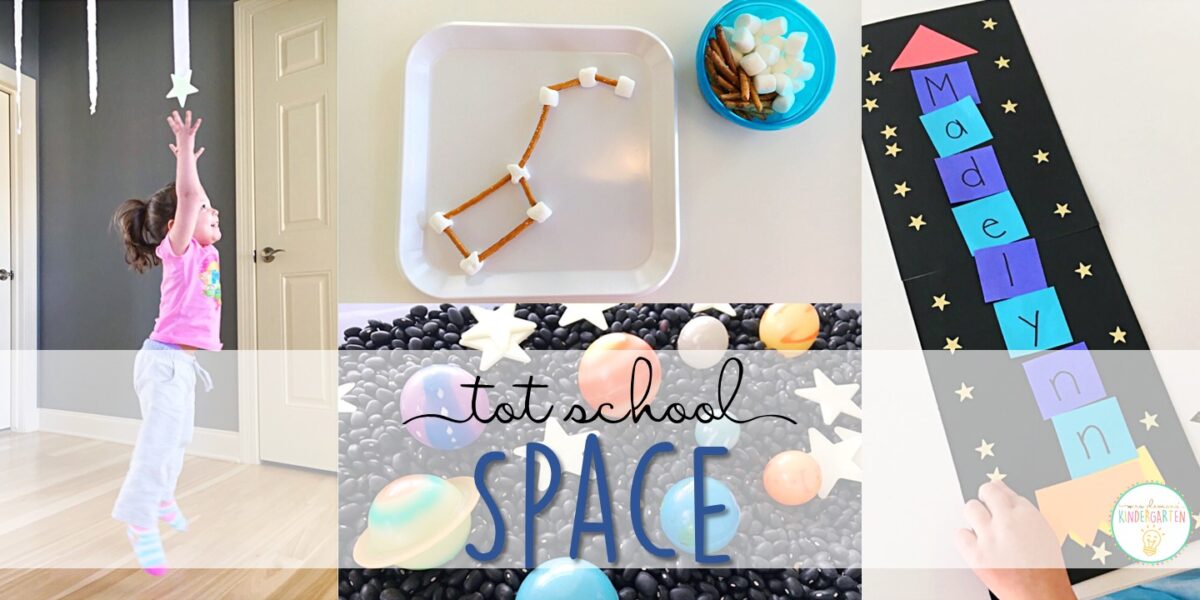 When planning out our Tot School calendar I have to tell you that I was not really as excited for some themes as others… I mean pumpkins, apples and Valentines, YES! Bring it on! But space, cars and dinosaurs aren’t exactly my jam. I’m a girl mom to 2 little pink tutu wearing cutie pies. Of course the 9 month old doesn’t have much to say about it, but my 3 year old? She dresses herself these days and lord help me if we try to put her in pants.

But I muster up all the excitement I can manage for my not so favorite themes and guess what? Madelynn somehow makes me grow to love them and I love that it pushes us both a little out of our comfort zone.

Here were our plans for Space Week:

Did you know cookie cutters make awesome stamps? I don’t know about you but I have tons of cookie cutters laying around for every holiday so I love pulling them out for projects.  Mini cookie cutters work best for little hands. After we were finished this page became the background for our planets.

Want a painting project without the mess? Try marble painting! First I cut out different sized circles from card stock for our planets. Next I cut the top off of one of the 9,254 Amazon boxes I had laying around (PTL for Amazon Prime, saving this moms sanity since 2013). I taped the circles in the box so they’d stay put while Miss Madelynn gently shook the box, went toddler crazy. I dipped marbles in different colored paint, and dropped them in. Madelynn was a little shake happy and we had a few flying marble incidents (thank goodness for washable paint), so if you are concerned about your spirited little ones getting too cray cray, keep the lid on and have a grand reveal after the shaking is done. We glued our planets to the star background for a fun finished product.

I thought about printing out constellation pictures for Madelynn to use as a reference, but decided to keep this project pretty open ended.  We started with adding lots of star stickers to black paper. After Madelynn was tired of stickering, we used a white piece of chalk to connect the stars.

Do you own Magnatiles? If not, I know what your kids need for their next birthday, Christmas, Valentines, or President’s day gift 😉 They are a bit pricey but we definitely get our money’s worth out of them. We play with them almost daily and they really never lose their appeal.  This week we added a few tin cans to our Magnatile bin so we could build rockets.

Now that Madelynn is getting pretty good at recognizing lowercase letters, especially the ones in her name, we are working on putting letters in her name in order. I precut a triangle, squares, and fire pieces from some Astrobrights paper. Then helped prompt Madelynn to get the letters in the right order.  Afterwards we added some more star stickers to make our project pop.

This was my favorite gross motor activity to date. Madelynn is getting to a really fun age where she LOVES pretend play, making forts, and obstacle courses. We combined these loves into a fun “Astronaut Training” obstacle course. First she had to crawl through a tunnel, then tiptoe through the “asteroids” (play balls from our ball pit), jump on the “moon” (pillows), then spin in our IKEA Swivel Chair and walk a straight line.

Next up we decorated paper plate spaceships, and practiced throwing them to see how far they would go. I originally glued them with white glue, but they kept falling apart so we took a quick time out while I hot glued them together, and problem solved.

Reach for the Stars:

To prep the next activity I taped glow in the dark stars to the ends of streamers and hung them from the ceiling.  Then I asked Madelynn to  practice her best astronaut jumps to catch them.  Well I grossly over estimated her jumping abilities at first and had to lower all the stars, haha, but then the activity was a success. Who knew 3 year olds could only jump .2 inches off the ground?!?

To make “moon rocks” I tore a few sheets of aluminum foil and scrunched them up into balls.  Next I set out a bin a few feet away. Madelynn tried her best to throw the rocks into the bin without getting to close.

We love our letter and number scavenger hunts over here. For this activity I printed uppercase letter stars and hid them around the house.  Then I gave Madelynn a page with all of the letters she needed to find.  Every time she found a letter she had to say the name, find it on her paper then color it in. So many great skills practiced in this activity.

Space Snack Mix – In a large bowl add a cup of each ingredient: Gerber Puffs, Multigrain Cheerios, and Kix cereal.

Edible Constellations – Push pretzel sticks into mini marshmallows to build constellations. Use pictures for reference or come up with your own ideas. Space Jello – First make a batch of Berry Blue Jello in a clear dish, following the directions for Jello Jigglers on the box. Before putting the pan in the refrigerator add edible star glitter. Next make the “planets” by making white jello (recipe below), dying it different colors with food coloring, then pouring an inch or so into small glasses of different sizes to set. After all the Jello has set take planets out and place them on top of the blue “Space” Jello

In this sensory bin: Mars Mud (because sometimes I just don’t want to fuss with making our own slime), and glow in the dark stars

Does this bin look familiar? That’s because it is our Astronaut Bin with some vinegar!  This bin gets really messy, so be prepared to dump it all when you are finished, but it is totally worth it! Baking soda + vinegar = tons of messy fizzy fun. In this sensory bin: baking soda dough, astronauts from our Space Toob, rocks, and vinegar.