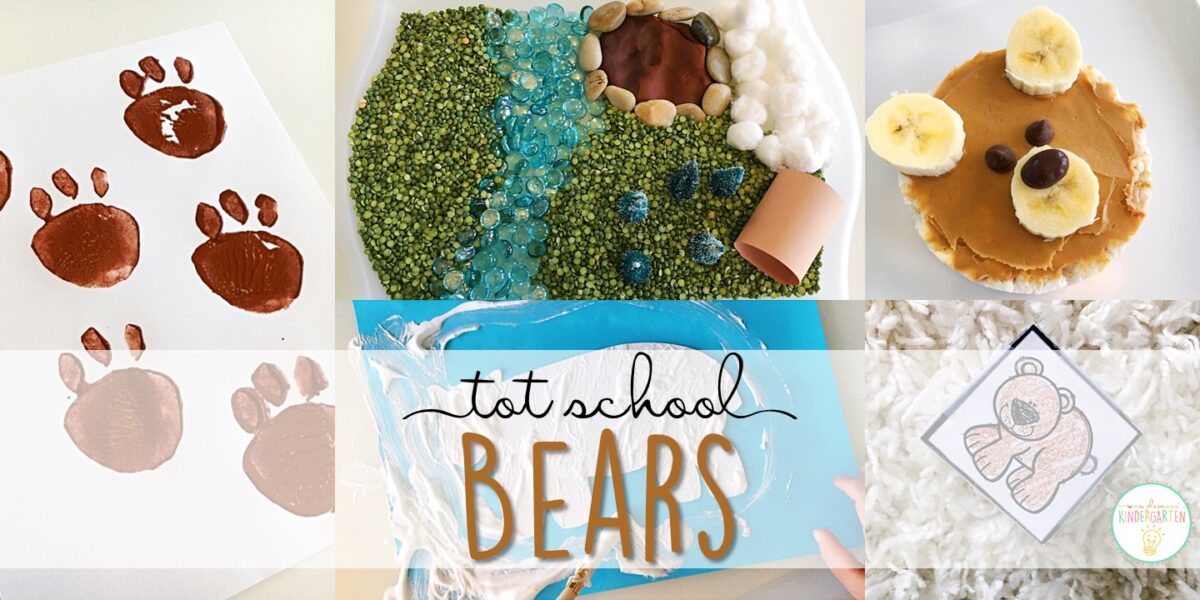 Do your kids LOVE Brown Bear, Brown Bear as much as mine? This story is such a classic I just had to plan a week theme around Bears and our favorite Brown Bear books.

Here were our plans for Bear week:

For this project I lined up scissors, glue, paper, markers, crayons and dot stampers in every color from the Brown Bear book.  Then I printed small versions of each animal for Madelynn to decorate any way she wished.

To create this stamp I did my best to carve a paw shape out of a potato to create a stamper. To make it easier for Madelynn to hold I also cut a wedge out of the top of the potato on either side for the handle.  Then Madelynn used brown paint and lots of paper to stamp bear tracks galore!

I grabbed this activity from my classroom Graphing Bundle that I used with kindergarteners.  Madelynn is great with sorting so this was a perfect extension to introduce graphing.  Madelynn grabbed a big handful of colored counting bears , sorted them by color, then with my help she colored in each section of her graph.

I intended to have Madelynn practice dot stamping with a cotton swab for this painting project but she decided to use her cotton swab as a brush.  I took her lead and love how her bear looked “fuzzy” when she was all finished!

After reading Polar Bear, Polar Bear, What Do You Hear?  we created our own version of the cover art with my favorite homemade puffy paint. (Just mix together equal parts white glue and shaving cream.) First Madelynn painted the polar bear cut out that I prepared ahead of time, then we glued it onto the blue paper. After that she added snow to the scene to complete her picture.

Our first gross motor activity for the week was inspired by Brown Bear, Brown Bear, What Do You See? First, I created a quick die with 6 of the characters on it. Then we rolled the die and decided how each character would move. Here are the animals and actions we used: Brown Bear-bear walks, Red Bird-flap wings, Blue Horse-gallop, Green Frog-hops, Goldfish-swim on tummy, and Yellow Duck-waddle.

This was a super simple gross motor activity.  I printed and laminated a bunch of bear paw prints then taped them down to the floor to make a trail around our house. Madelynn practiced her bear walks and followed the trail.

Madelynn recently discovered how fun it is to play hide and seek, so we switched it up a little to match our theme this week with Teddy Bear hide and seek.  We took turns hiding the bear and counting to 10 before searching for our furry friend.

For this gross motor activity, we used colored counting bears and took turns running back and forth while balancing them on a spoon. At the end we dumped them in a cup.  I set out 4 cups so that we could make it a sorting activity as well, but Madelynn wanted to see if she could fit all the bears in one cup instead.

I love a good song for gross motor and movement, so I had to include the classic Teddy Bear, Teddy Bear rhyme this week.  I even found this video on YouTube for Madelynn to follow along with.

Graham Cracker Bear – Cut a jumbo marshmallow in half for mouth, then cut in quarters for the ears. Place on top of a graham cracker. Use a food coloring marker to draw a mouth. Add a chocolate covered raisin and candy eyes to complete the face
Cinnamon Bear Tracks – Separate biscuits from a tube of biscuit dough. Snip the ends to look like claws. Brush them with butter and sprinkle with cinnamon and sugar. Bake as directed
Teddy Bear Rice Cake – Spread peanut butter on a rice cake. Use banana slices for the ears and nose. Add chocolate chips and/or chocolate covered raisins for the eyes & nose. Teddy Bear Pancakes –  Make a batch of your favorite pancake batter. Make one large, one medium and 6 small pancakes. After they are finished arrange pancakes on plate in a bear shape. Melt milk chocolate and use it to pipe on a mouth and paws. Add candy eyes and a blueberry nose.   Polar Bear Paws – Slice jumbo marshmallows to make flat circles. Add mini peanut butter cups and 3 chocolate chips to create pawprints.