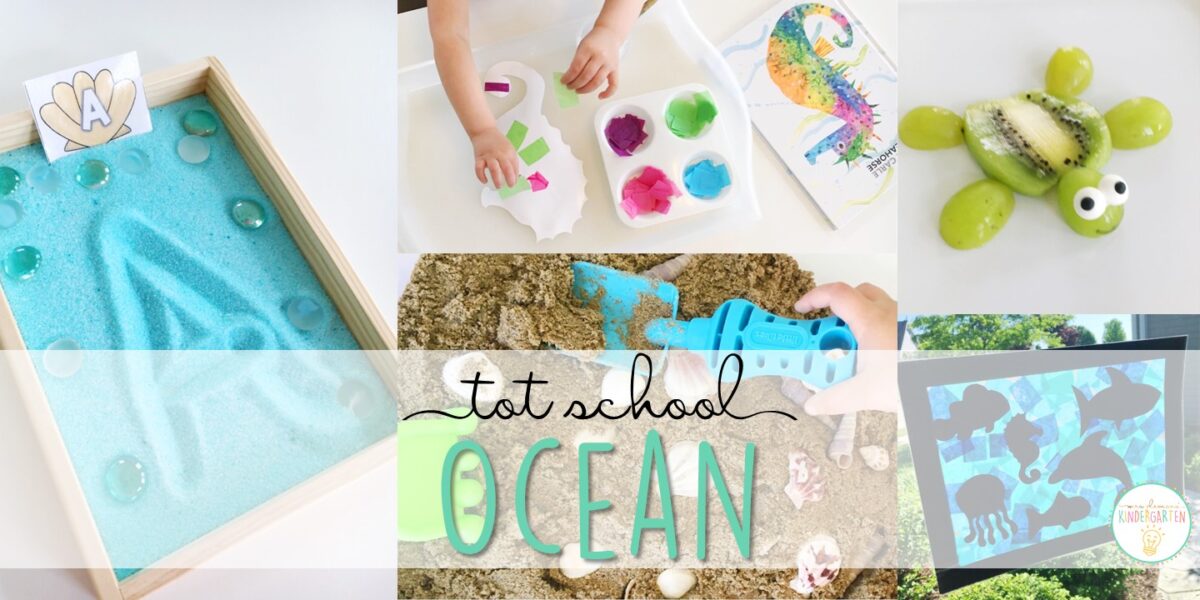 We are gearing up for summer this week with our ocean theme. Just 2 more full weeks of Tot School then we will be switching things up for summer, and we are so ready for some fun in the sun! 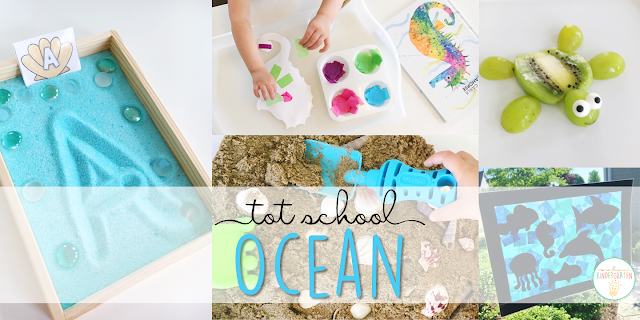 **This post contains affiliate links for your convenience. View our full disclosure policy here.**
Here were our plans for Ocean week: 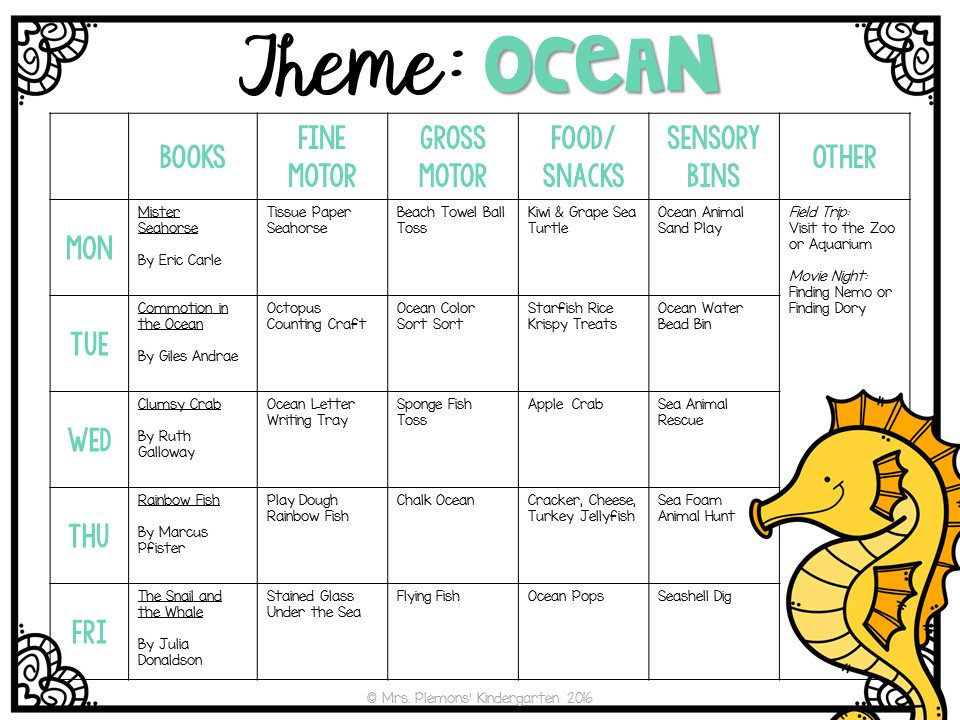 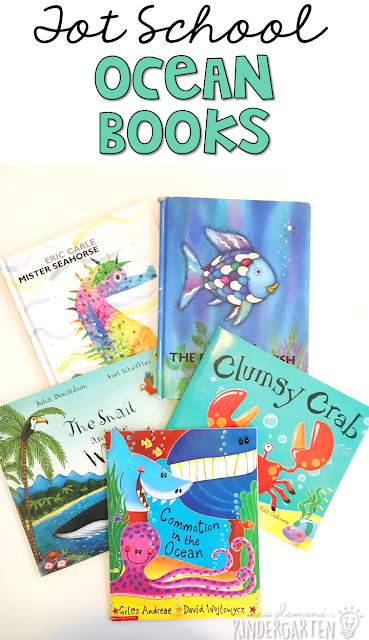 Our favorite ocean books for the week were:
Mister Seahorse By Eric Carle
Commotion in the Ocean By Giles Andreae
Clumsy Crab By Ruth Galloway
Rainbow Fish By Marcus Pfister
The Snail and the Whale By Julia Donaldson 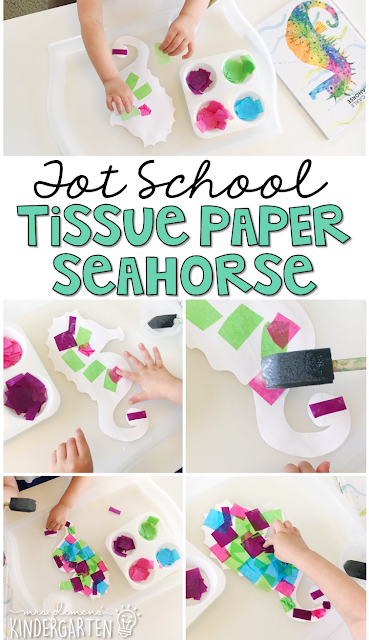 Tissue Paper Seahorse:
Eric Carle’s artwork always inspires me, so this little seahorse craft was inspired by his book Mister Seahorse. I prepped a cut out seahorse shape and cut up tissue paper squares in green, blue, purple, and pink. Madelynn used a foam brush and watered down glue to attach the tissue paper. First she painted the seahorse, then stuck the tissue paper to the sticky spots, and finally painted over it again with more glue. 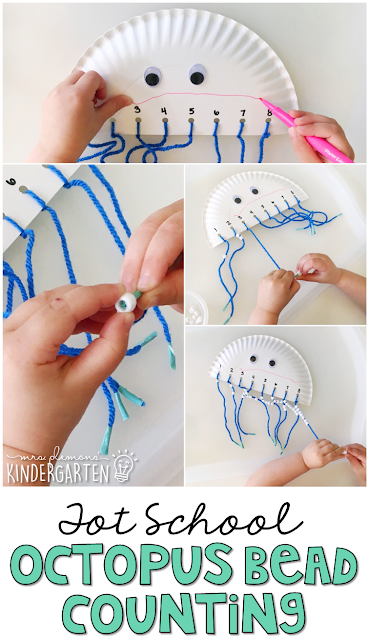 Octopus Bead Counting:
Madelynn totally called me out on the fact that this octopus look like a jellyfish, but hey I tried. I cut a paper plate in half, punched 8 holes and tied on yarn legs (or tentacles I guess!). I used a bit of washi tape wrapped around the end of each piece of yarn to make them easier to thread. Then Madelynn counted and threaded beads to match each number. 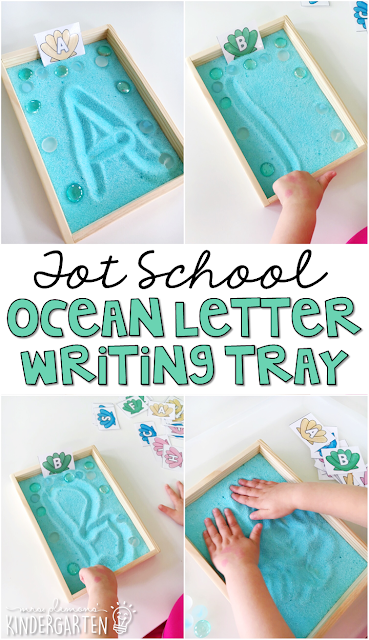 Ocean Letter Writing Tray:
We love salt trays for practicing pre-writing skills! I made this under the sea letter writing tray with blue salt (dyed with a little bit of gel food coloring), glitter, gems, and added letter cards as a model. 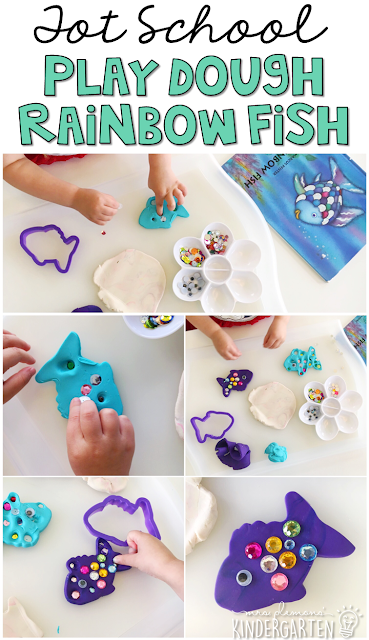 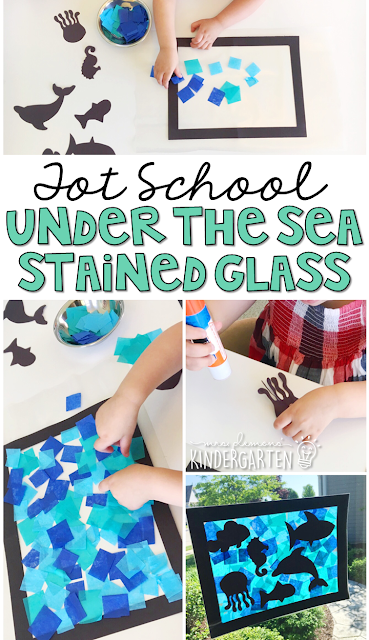 Under the Sea Stained Glass:
If you’ve followed along with our tot school adventures this year, you know I love a good stained glass window project! They always turn out so pretty and are a super easy way to keep little hands busy. First I cut out 2 black rectangles and ocean animal shapes from black construction paper. Then I stuck one rectangle on contact paper and Madelynn filled in with tissue paper squares for the water. Then she glued the animals and the second rectangle on top. Finally I helped her seal with another sheet of contact paper. Display in a sunny window 🙂 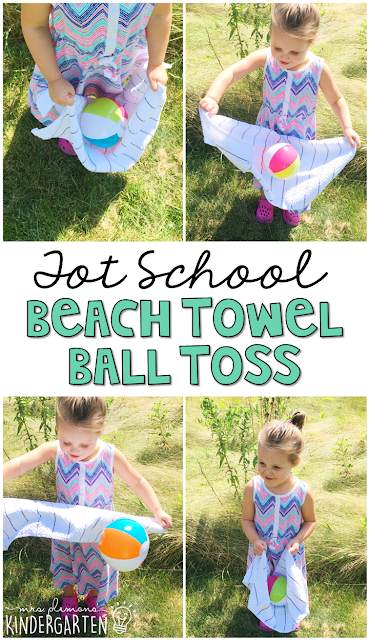 Beach Towel Ball Toss:
For this game I planned to use a large beach towel, then quickly realized it was way too big for little hands. So I swapped it out for a kitchen towel and we were good to go. I had Madelynn hold the towel loosely and try to catch a beach ball with it.  Then I showed her how to snap the towel to make the ball fly out. After she got the hang of it, I grabbed a towel and we tried to toss the ball back and forth. 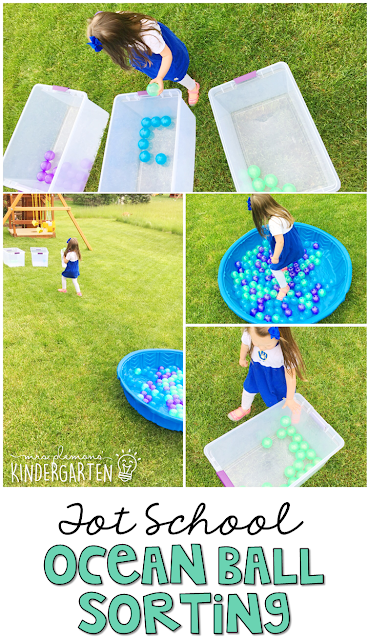 Ocean Ball Sorting
We were lucky enough to make it outside this week for some movement activities. We started with this ocean bubble color sort. To set up I put blue green and purple ball pit balls in a kiddie pool and placed 3 empty storage bins on the other side of the yard.  Then I got Madelynn started by showing her how to grab a few balls and sort them into the 3 bins.  Then all I did was watch her wear herself out! 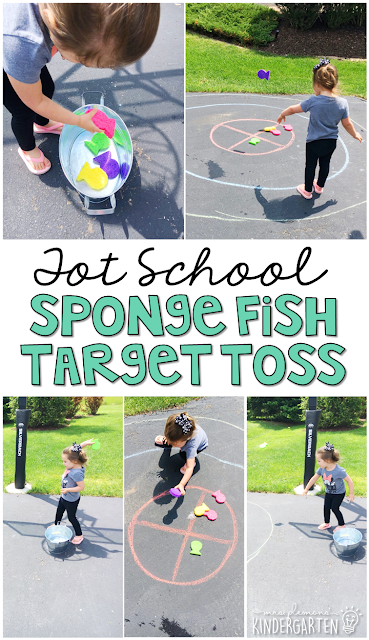 For this gross motor activity, I cut a few sponges into fish shapes and dropped them in a bin of water.  Then I drew a target with sidewalk chalk. Madelynn then tried to toss the wet fish sponges to hit the center of the target. Lots of splashy fun! 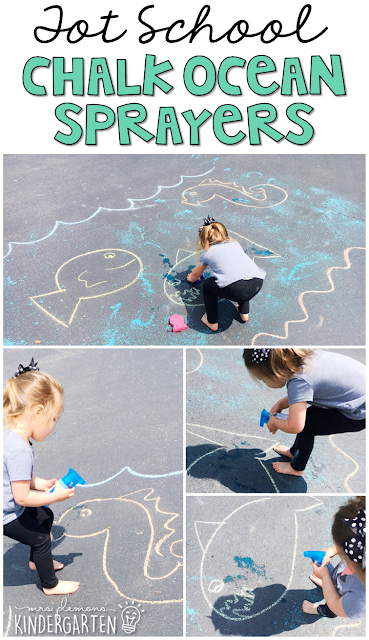 Madelynn is always asking me to draw fun scenes with sidewalk chalk, so I made this ocean scene for her to “swim” through. Then she used some spray chalk I found in the Target Dollar Spot to run around and spray all the animals. 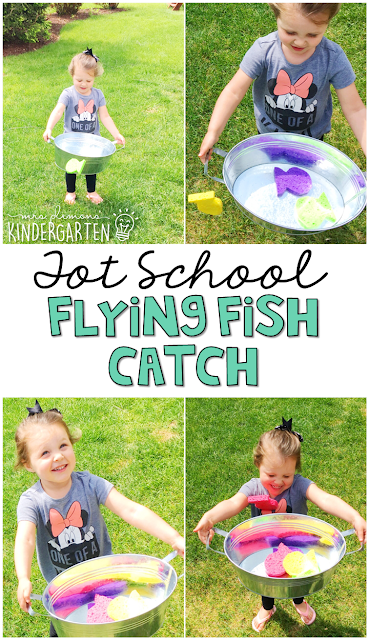 We pulled out those sponge fish again for this super simple flying fish game.  I tossed soaked fish sponges into the air and Madelynn used a tin tub to try to catch them. Lots of wet fun! 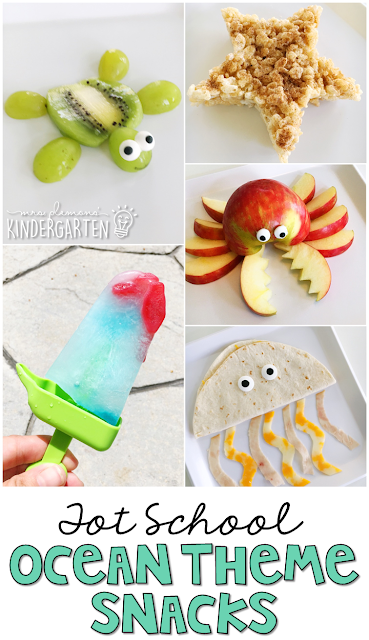 Sea Turtle – Peel and cut a kiwi into a thick oval slice. Halve grapes for the legs and head. Attach candy eyes with a bit of decorator icing. Draw a smile with a food coloring pen.

Starfish Rice Krispies Treats – Heat 3 Tbsp butter and 4 cups mini marshmallows in microwave on high for 3 minutes. Stir after 2 minutes. Add 6 cups Rice Krispies cereal and sprinkles. Stir until well coated. Using cooking spray or wax paper, press cereal mixture into star cookie cutters. Sprinkle with cinnamon and sugar. Cool on wax paper.
Apple Crab – Core and cut an apple in half. Use one half for the body and cut the other half into 10 slices. Use 8 slices for legs and carve the last 2 slices into claws. Attach candy eyes with a bit of decorator icing.
Quesadilla Jellyfish – Make a quesadilla with one tortilla folded in half. Cut tentacles from cheese and turkey slices. Add candy eyes. 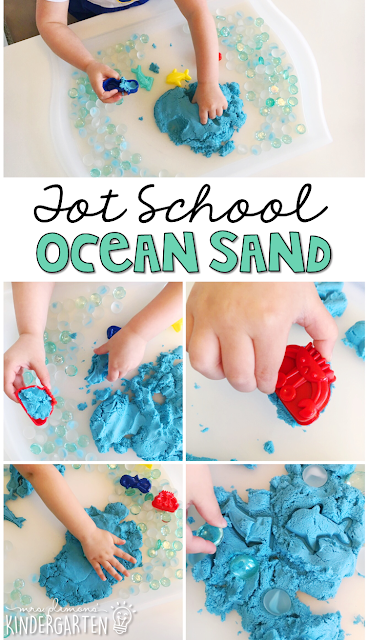 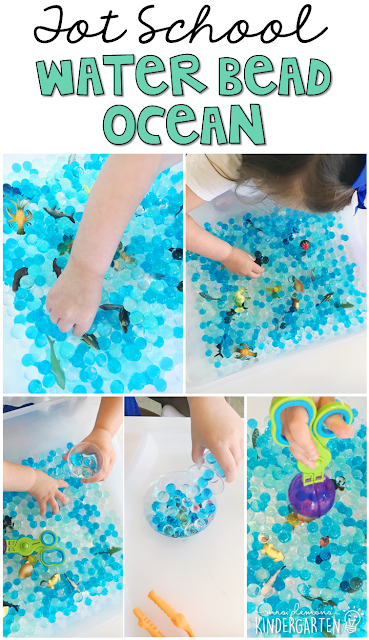 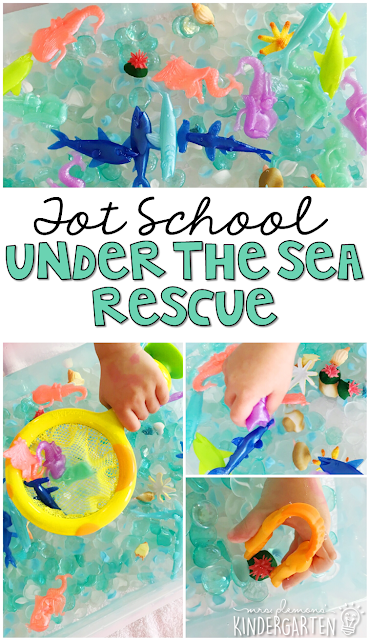 Under the Sea Rescue Sensory Bin: 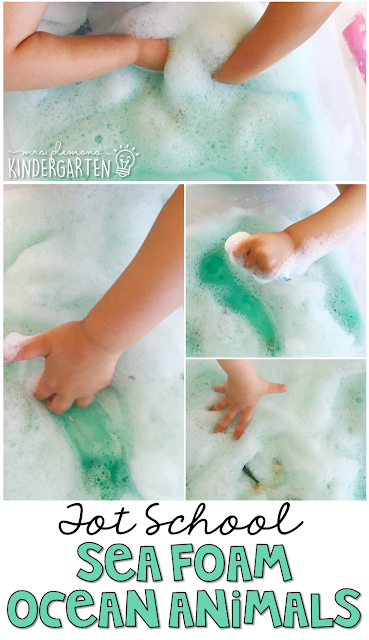 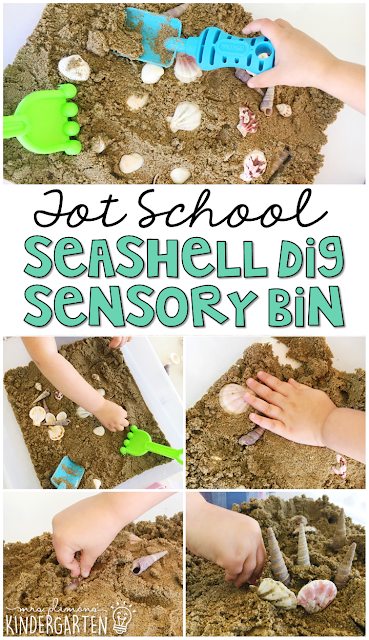 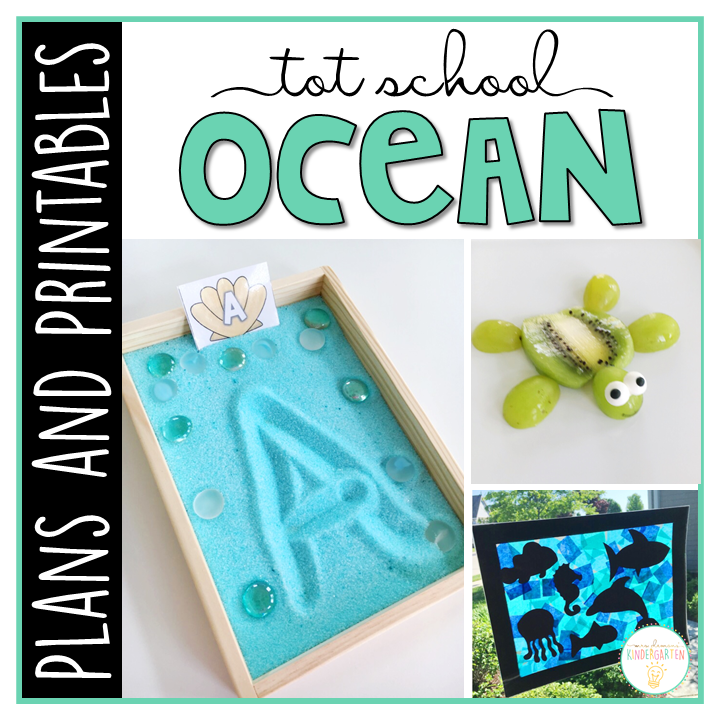 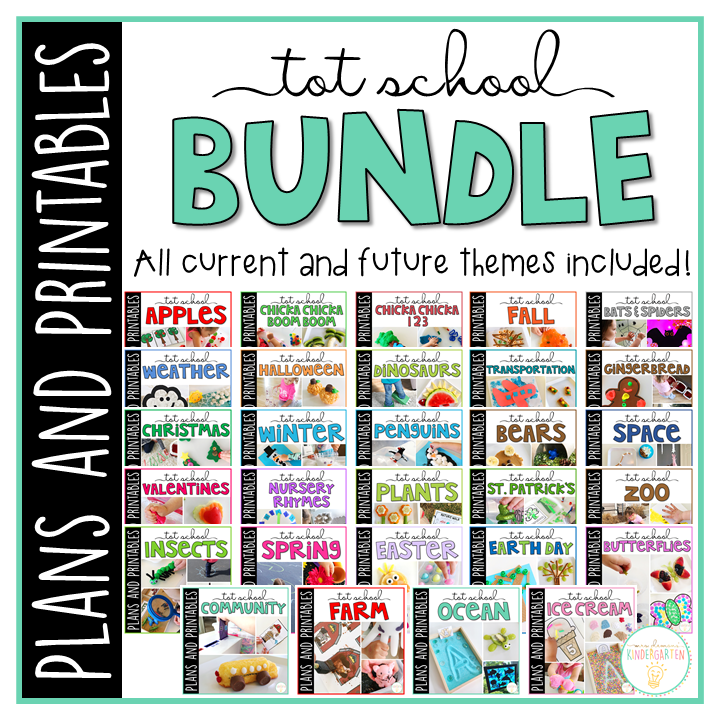 Then check out all of our Tot School themes here: 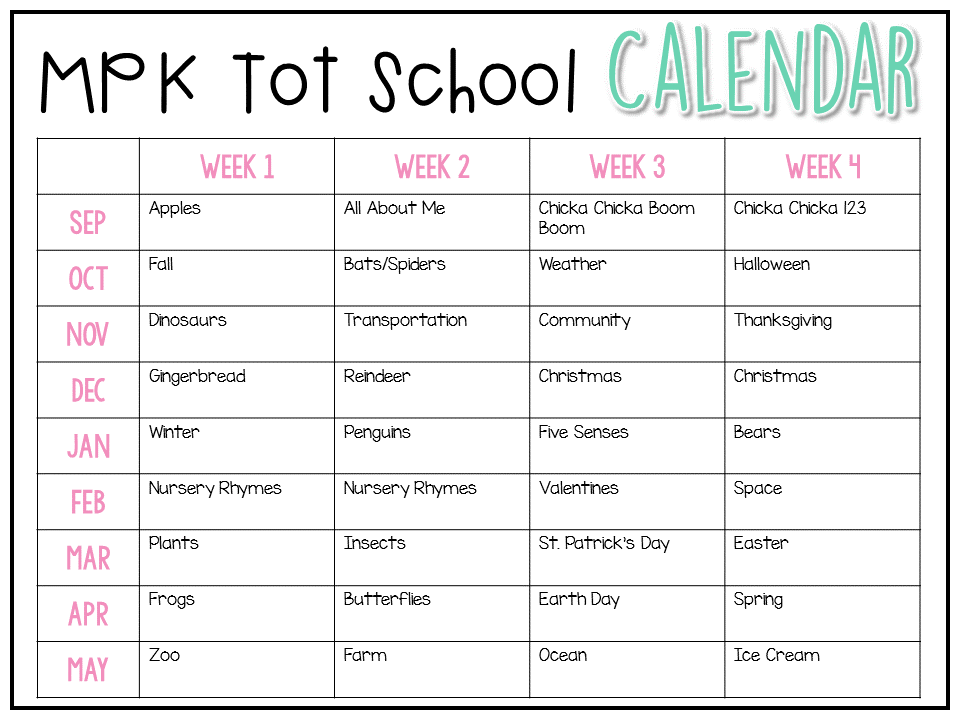 Getting Started with Tot School