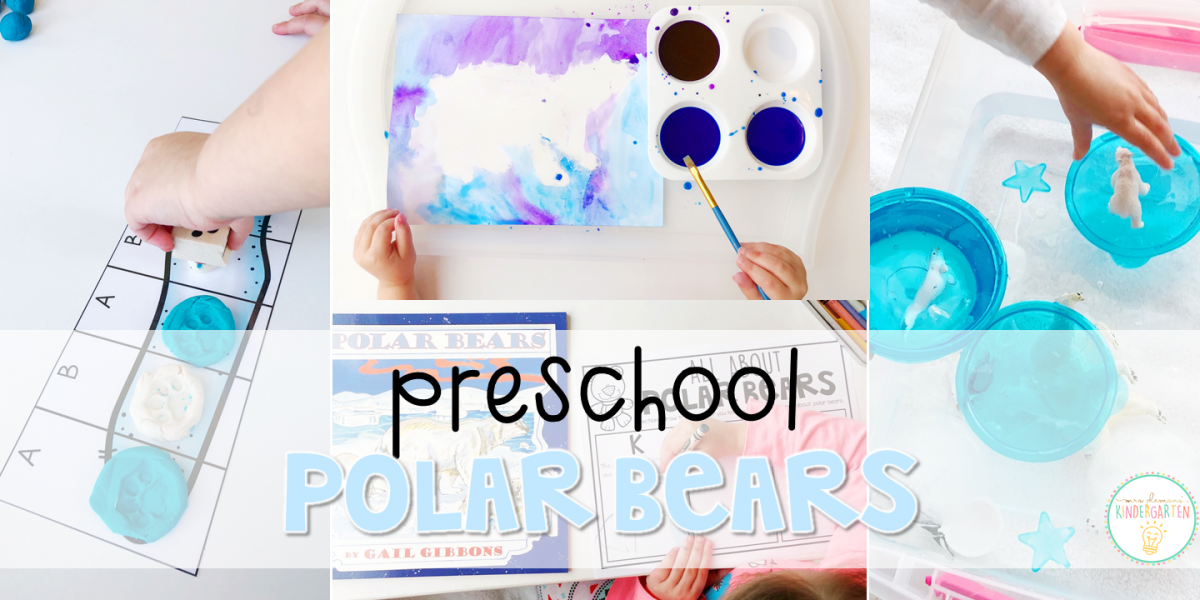 Do your kids love learning about animals as much as mine do?  I know I can always save the with a trip to the zoo, but unfortunately here in Wisconsin zoo trips don’t happen too often in the freezing cold temps.  But winter IS the perfect time to learn about polar animals indoors, so this week we had plenty of arctic animal fun learning all about polar bears.

Here were our plans for our Polar Bear theme:

We started the week off reading Love Matters Most by Mij Kelly and it is just about the sweetest story ever.  With Valentine’s Day around the corner, this story of a polar bear mother’s love for her lost cub will melt your heart. We used this book to practice making predictions so I asked Madelynn what she thought the story would be about. She said “They’re going to find some animals and be sneaky.” Clearly she didn’t listen too much to the title but I suppose you could get a sneaky polar bear vibe from their faces on the cover.

Our next story was The Polar Bear and the Snow Cloud by Jane Cabrera. Before reading we discussed and defined characters. “A character is a person or animal that does things in the story.”  After reading, I printed the polar bear characters response page. Madelynn drew and labeled the characters in the story then circled the main character.

Our next read aloud was the nonfiction book Polar Bears by Gail Gibbons.  Gail Gibbons has tons of great non fiction titles packed with great information for little ones.  There is so much information we did skip over parts, but I love that this is a book that will grow with my girls. Before reading, we talked about what we already know about polar bears. Madelynn drew a picture and told me that “polar bears walk in the snow and dive under water.”  I helped record each idea on the polar bear KWL chart under “K” for know. Next we discussed things we want to know about polar bears. Madelynn drew a picture and asked “do they eat fish?” I recorded her question under the “W” for wonder. Finally we read the book and talked about our new learning. Madelynn learned that they eat seals so she drew a picture and I wrote her sentence under the “L” for learned.

Our polar bear theme wouldn’t be complete without reading Polar Bear, Polar Bear What Do You Hear by Eric Carle. After reading, Madelynn used polar bear character and word cards to match the name to each animal. Then she put the cards in the order the animals appear in the story while looking back through the book as needed. Finally she cut and paste the animals in the correct order on the sequencing page to retell the story.

Our last book was this letter B alphabet reader. Madelynn identified the picture then pointed to each word as she read. Afterwards she colored all of the pictures in.

This week we focused on rhyme so we started with this color by code activity. Madelynn identified the pictures on the left side of the page, then searched the picture on the right for words that rhymed. Then she followed the directions to make each spot the correct color.

Next, for more letter practice we used our dot stampers. We started out stamping inside the letter to make a B for bear. Then Madelynn had to find the upper and lowercase b’s in the bear, stamp them and make the “B” sound each time.

We pretended to be hungry polar bears for this fun CVC word game.  First I cut out a piece of “ice” from white cardstock, taped it to the top of a tissue box and cut a slit in the paper. Then I placed CVC word fish in the box. Madelynn used polar bear paws (white gloves) to reach in and pull out a fish. Finally she tried to say the word slowly and write the 3 sounds in each word.  Even though we haven’t worked much on middle sounds, having the box in middle encouraged her to listen and attempt to identify a sound for each part of the word.

For this week’s name craft we created this adorable polar bear.  First Madelynn cut the polar bear pieces out. Then she wrote the letters in her name on each of the paw prints. After she finished writing, she glued the polar bear pieces together and added the paw print pieces to the page in order to spell her name. Finally she used her finger dipped in white paint to complete each paw print with dots and added foam snowflakes.

For our journal this week Madelynn chose to draw and label a polar bear habitat.  After creating her polar bear home and adding lots of detail, she labeled her picture “cv” for cave.

Our first math activity this week was a polar bear themed writing tray.  I filled our clear tray with instant snow. Then Madelynn used small bear number cards as a model to write numbers in the snow with polar bears or her finger.

This week we worked on identifying, extending and creating patterns.  For our first activity I printed bear track pattern cards and made small balls of white, light blue and dark blue play dough. Madelynn used the colored playdough to create each type of pattern. Then she used a paw print stamp to squish each ball into a bear track while naming the pattern (AB, AAB, ABB, and ABC.)

For more pattern practice, I printed several copies of a snowy pattern page. Madelynn used paw print stamps and paint to create bear print patterns on each snow bank. I encouraged her to try different types on each one (AB, AAB, ABB, and ABC.)

After reading Polar Bear, Polar Bear What Do You Hear by Eric Carle I put together some polar bear pattern cards with the animals from the book. Madelynn chose a card to use as a model, then used character cards to create each pattern.

For a yummy end to our pattern practice we created patterns with colored goldfish. I created pattern pages and Madelynn used color goldfish crackers to create each type of pattern. Then she pretended to be a hungry polar bear and chomp all of the fish.

To prepare this project I first printed a polar bear outline on heavy cardstock. Then I cut out the center of the outline and taped it to a white sheet of paper. Madelynn traced the polar bear with white pastel and colored it in completely.  I removed the polar bear template and Madelynn painted the page with purple, light blue, and dark blue liquid watercolors.  After it dried she added snowflake stickers.

To create this sorting bin I filled a small bin with fake grass on one side and cotton ball “snow” on the other then printed polar/non polar animal labels for each side. I filled another bin with small plastic animals of various types. Madelynn tried to sort animals into polar and non polar animals. Then we discussed the characteristics of each.

For this icy multimedia craft, Madelynn started by drawing a black line across a piece of paper with crayon. Next she painted the top of the paper purple with liquid watercolors. Then she painted the bottom of the paper light blue. (I probably could have watered down our blue a bit more as it ended up pretty dark.) Next we added a piece of clear plastic wrap to the bottom to create an icy look.  I helped Madelynn add a few drops of glue to the corners to hold the plastic in place. After the page dried we cut out a polar bear and glued it to the icy picture. Finally we added a few dots of white paint to the sky for snow.