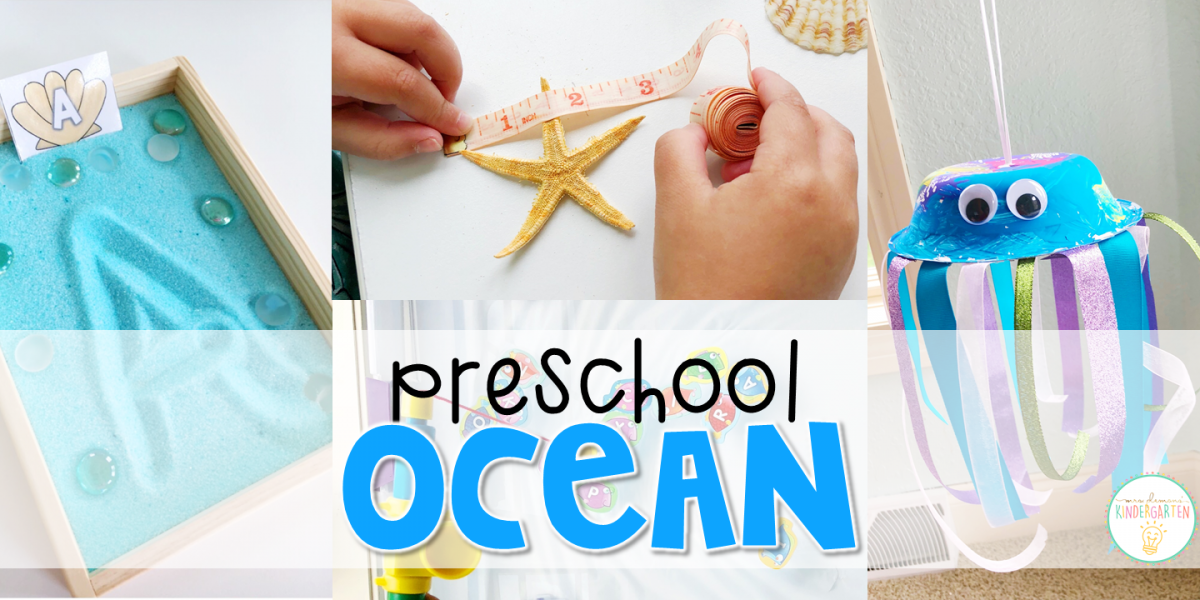 We are getting ready for summer here with our ocean theme which is always one of our favorites! Just 2 more weeks of preschool with my little ones before we take a break for the summer! 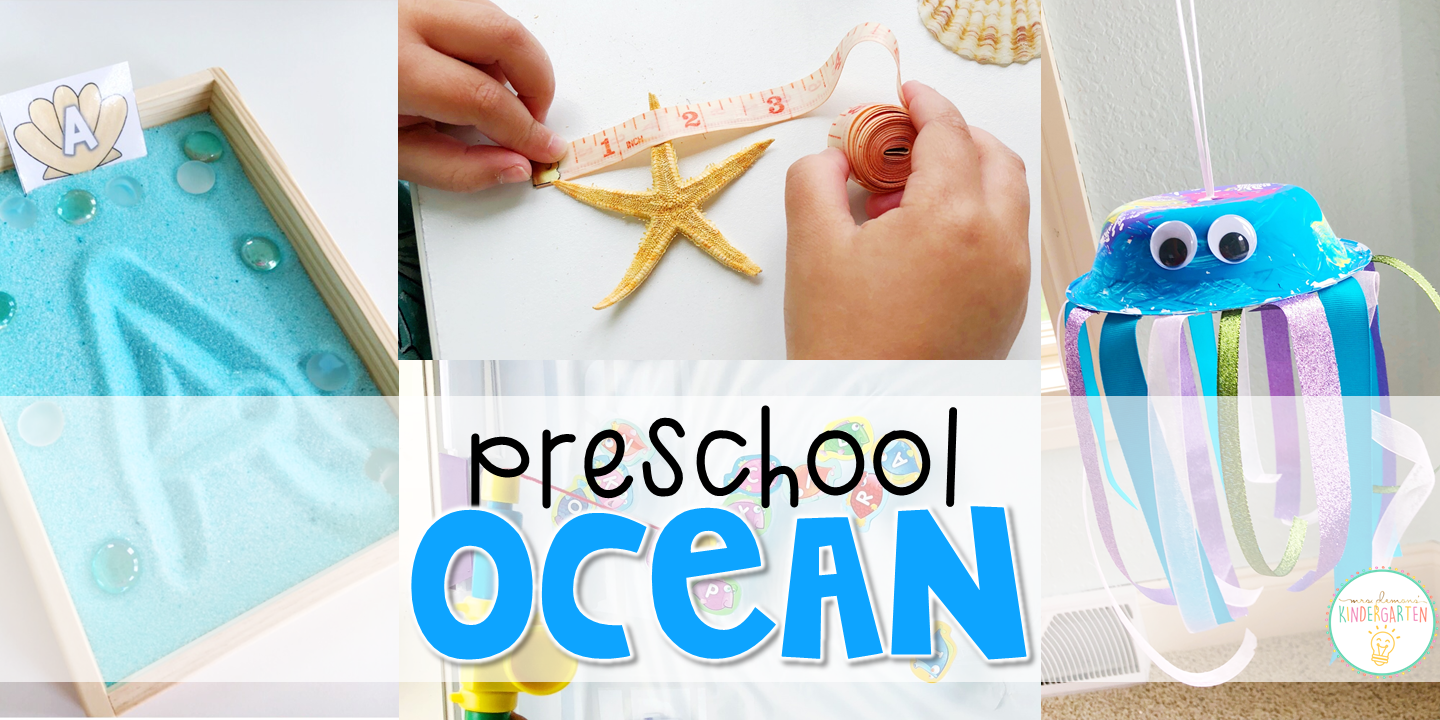 **This post contains affiliate links for your convenience. View our full disclosure policy here.**
Here were our plans for our ocean theme: 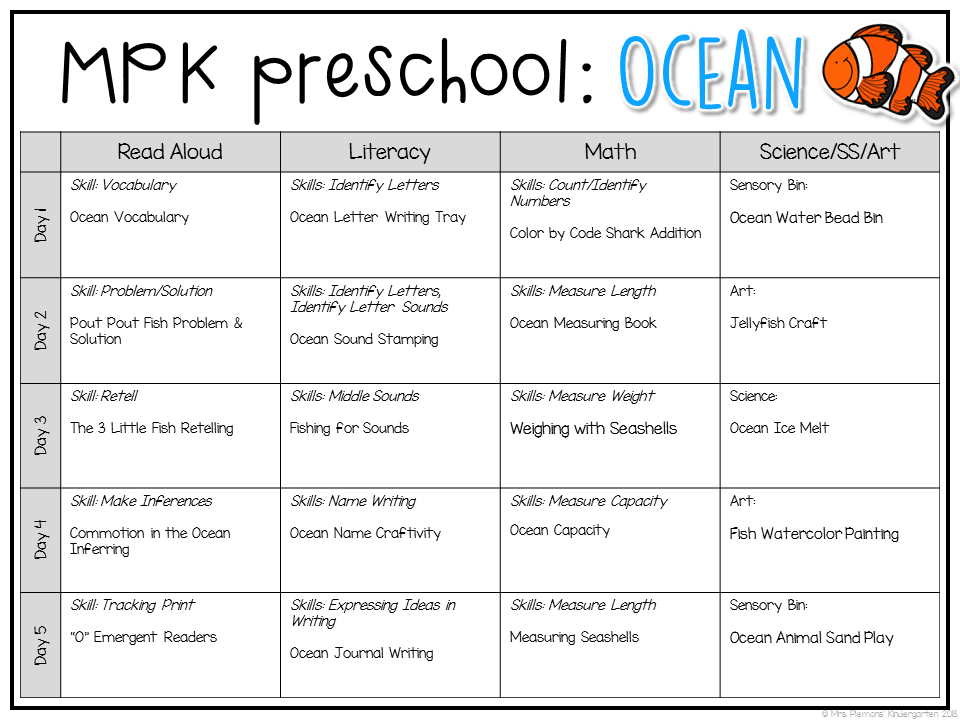 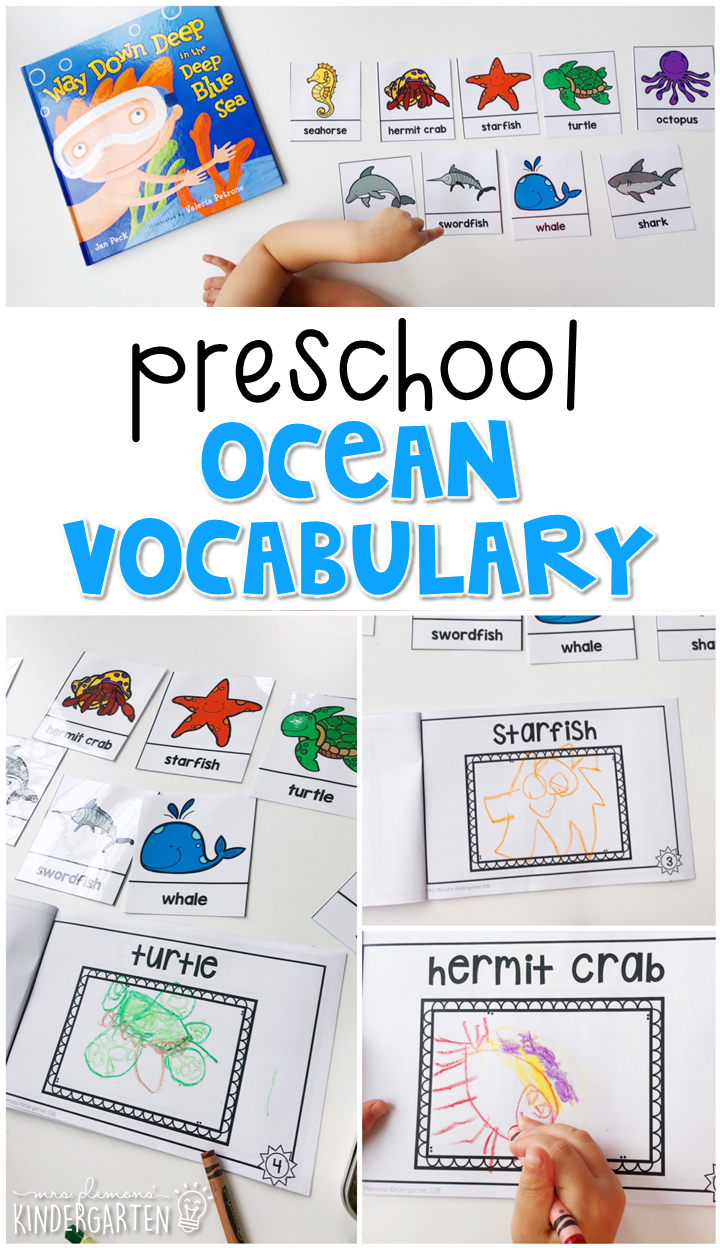 Our first book this week was Way Down Deep in the Deep Blue Sea by Jan Peck. While reading I used picture cards to reinforce new words. Then Madelynn made an ocean vocabulary book. She drew pictures to show each animal and used the picture cards and book as a reference. 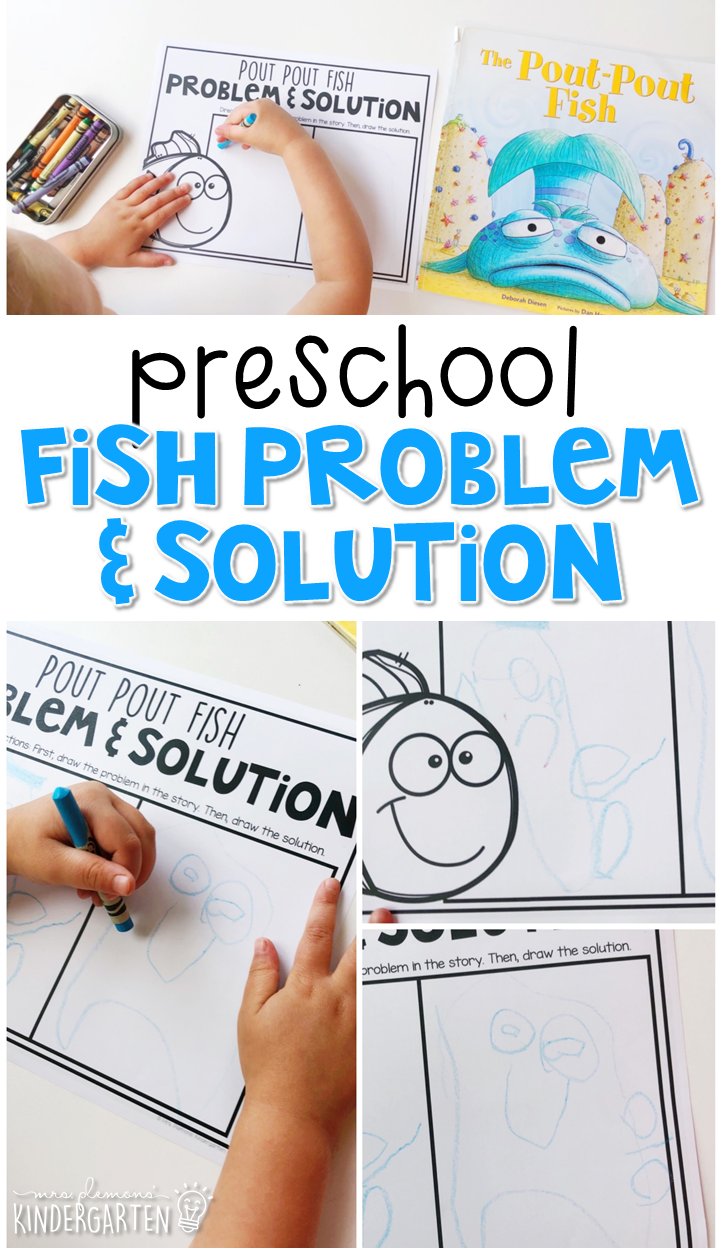 Our next story was Pout Pout Fish by Deborah Diesen. Before reading we discussed and defined problem. We talked about how every story usually has a problem or something that goes wrong. After reading, Madelynn drew and labeled the problem in the story (The pout pout fish was very sad.) Then we talked about and drew how the problem was solved (He met Miss Shimmer and she gave him a kiss. Then he felt better!) 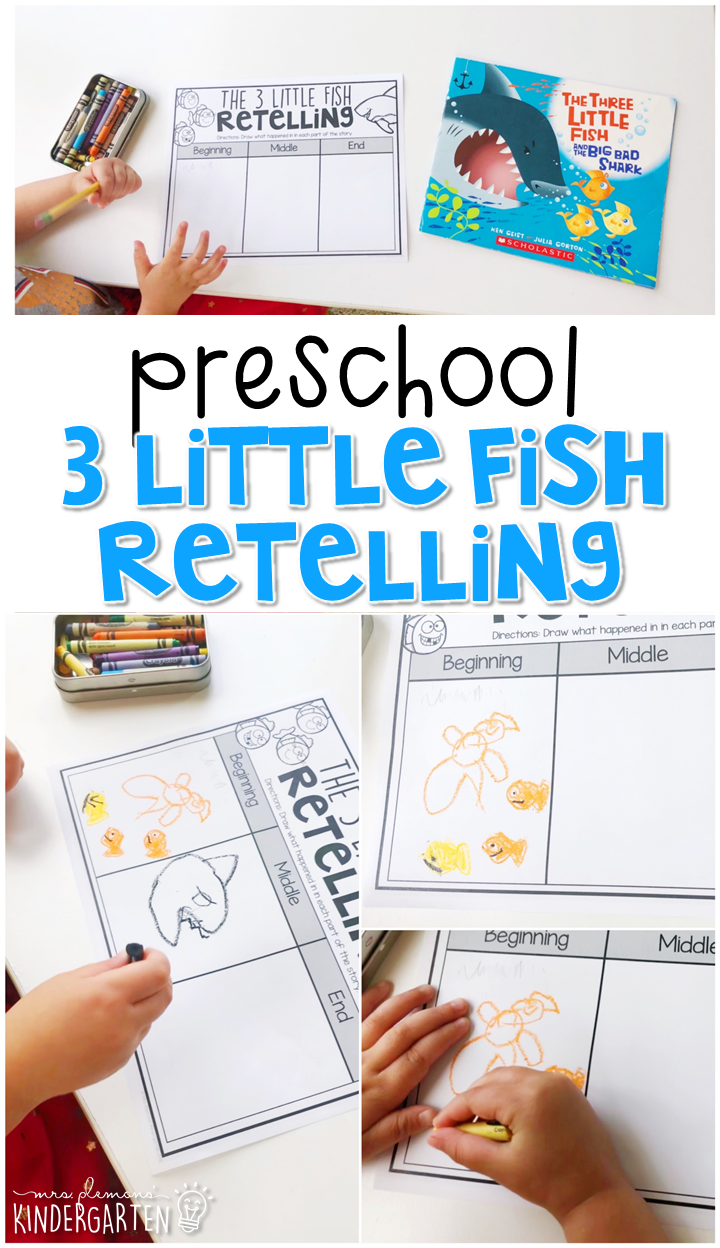 Our next story was The Three Little Fish And The Big Bad Shark by Will Grace. After reading, Madelynn drew to show what happened in each part of the story. 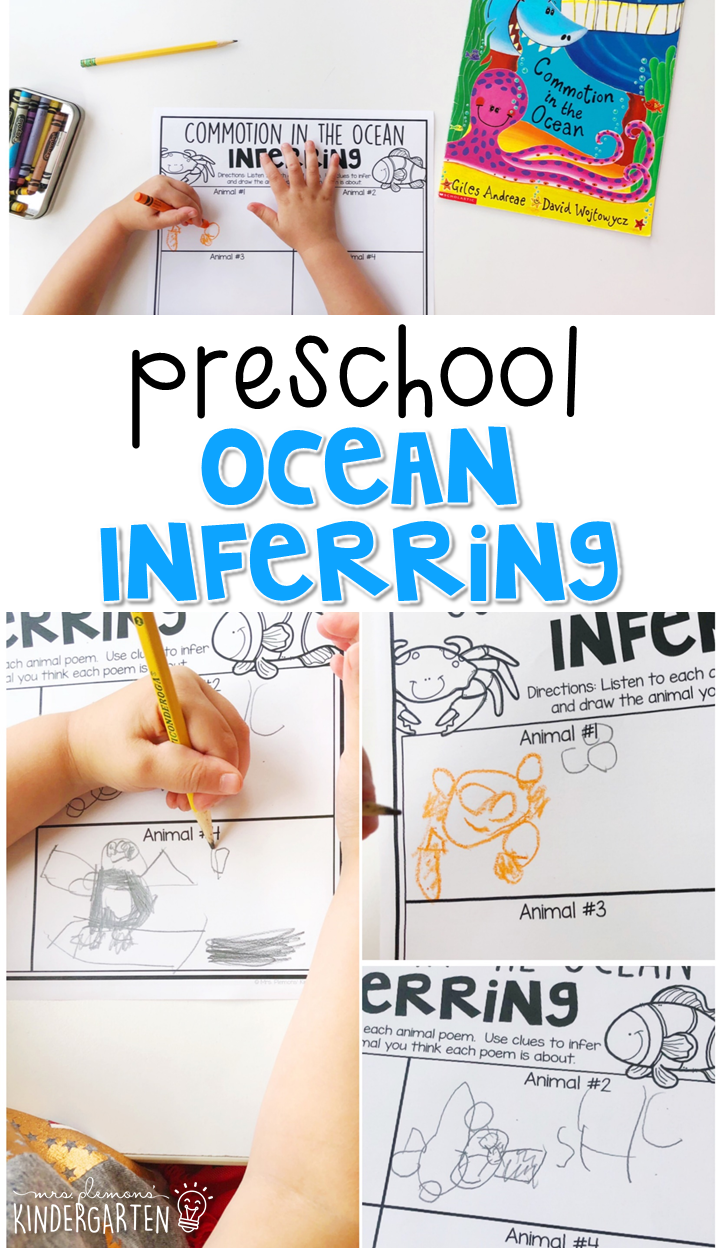 Our last book was Commotion in the Ocean by Giles Andrae. First we discussed the animals that live in the ocean. Then I read the poems 1 at a time without showing the illustrations.  Madelynn used the clues in the text along with what she knew to infer the type of animal and draw it on her response page. She loved when I showed her the picture to check if she was right. 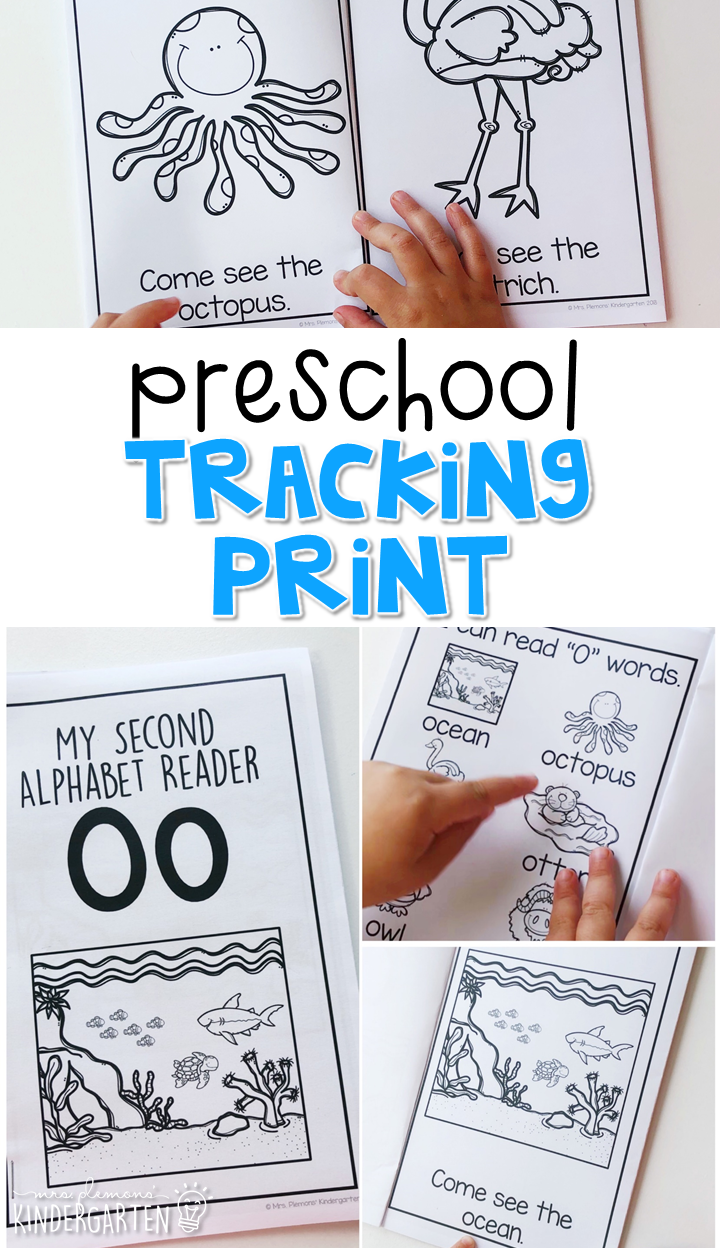 Learning vowel sounds can be tricky and are usually the last letter sounds I worry about preschoolers mastering.  So for our last book this week we read this O for ocean alphabet reader. I included a mixture of items that representing short and long O sounds. Madelynn identified the picture then pointed to each word as she read. Afterwards she colored all of the pictures in. 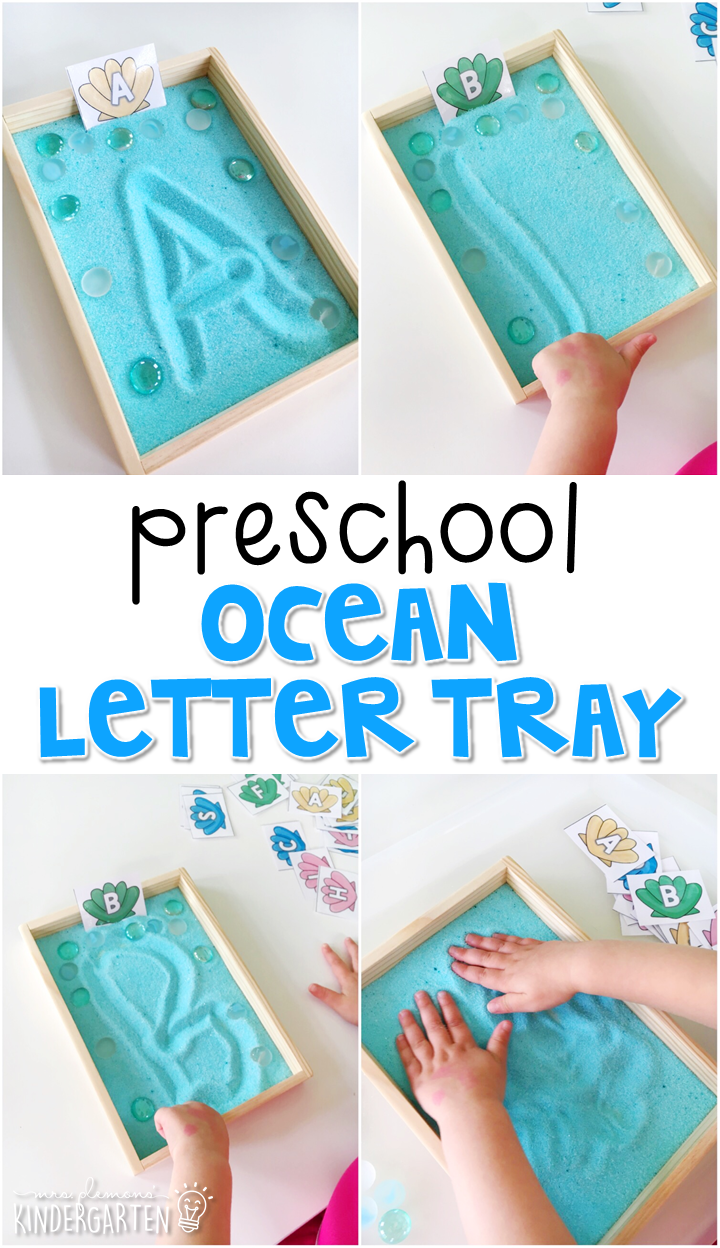 Our first literacy activity this week was an ocean themed letter writing tray. To make this fun sensory activity I filled our tray with blue sand and gems. Madelynn used seashell letter cards as a model and chose which ones she wanted to practice. Then she used her finger to write letters in the sand. 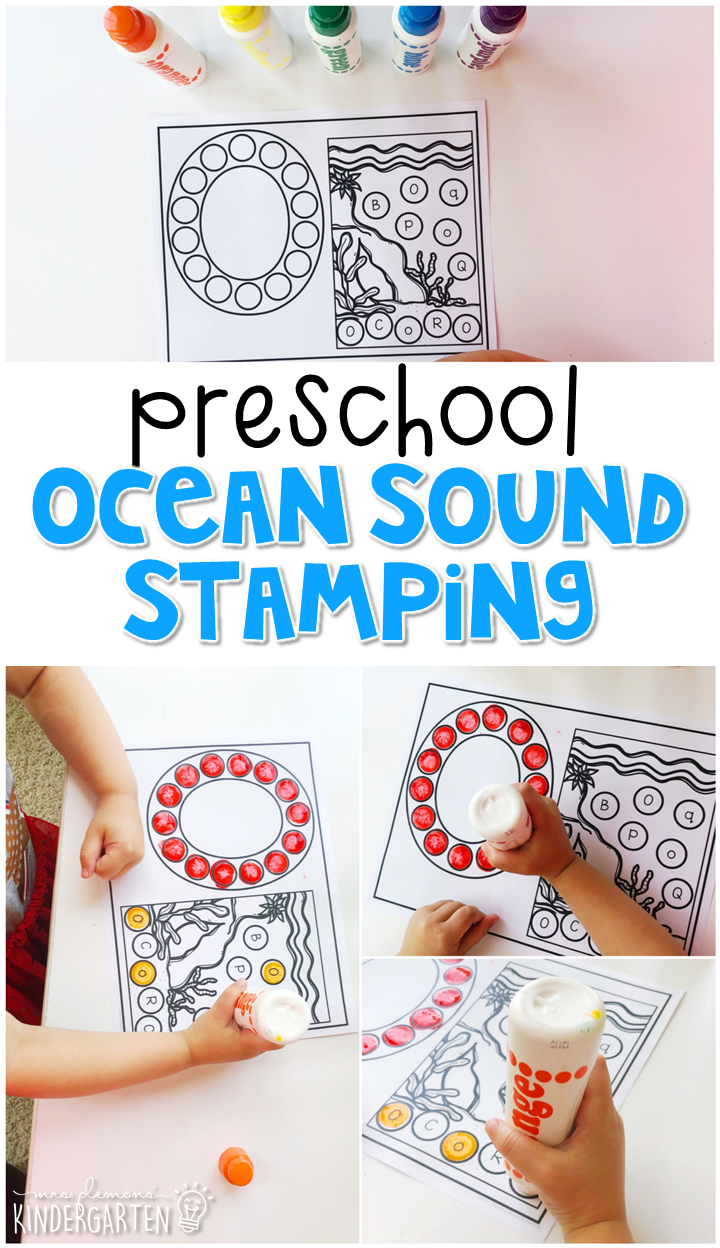 Next, for more letter practice we used our dot stampers. We started out stamping inside the letter to make an O. Then Madelynn had to find the upper and lowercase o’s in the ocean, stamp them and make the “O” sound each time. Then she stamped the other letters different colors and tried to make the sounds for each one. 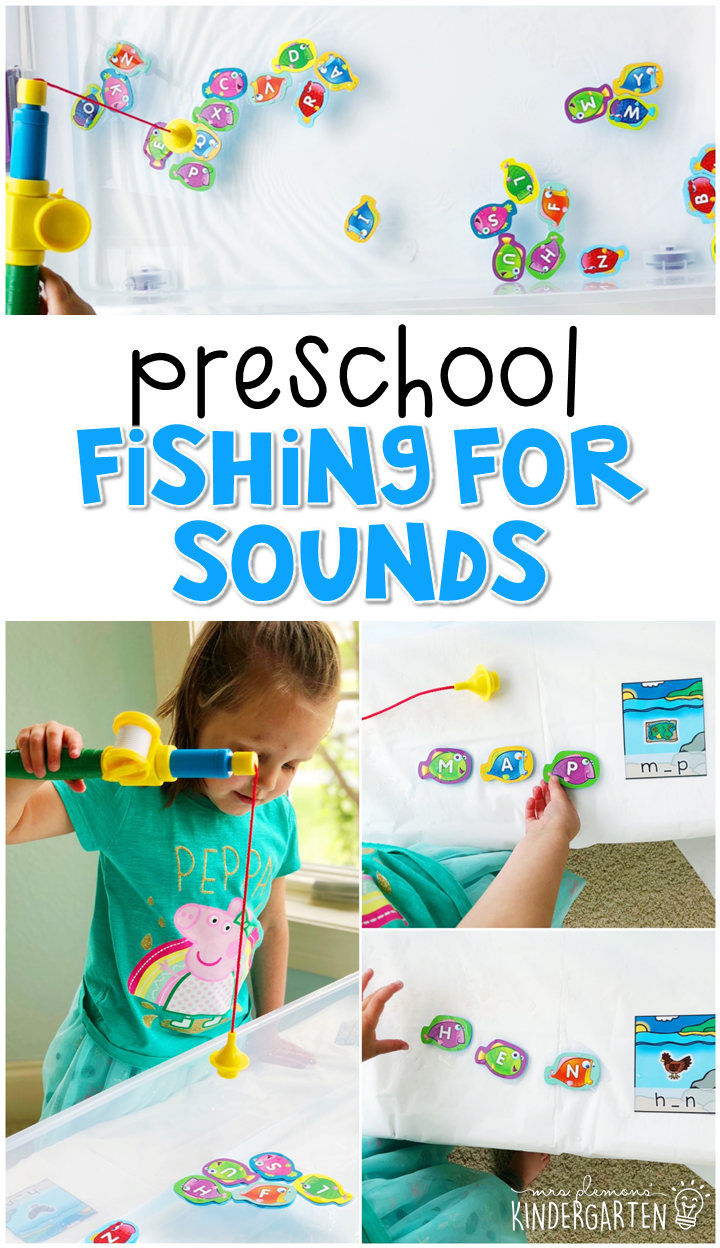 This game was super engaging and easy to set up.  First I printed, laminated and cut out the ocean word cards. Then I filled our large bin with water and foam letters from the lakeshore alphabet fishing game. Madelynn used the magnetic fishing pole to catch letters and build each word, identifying the missing middle sound for each one. 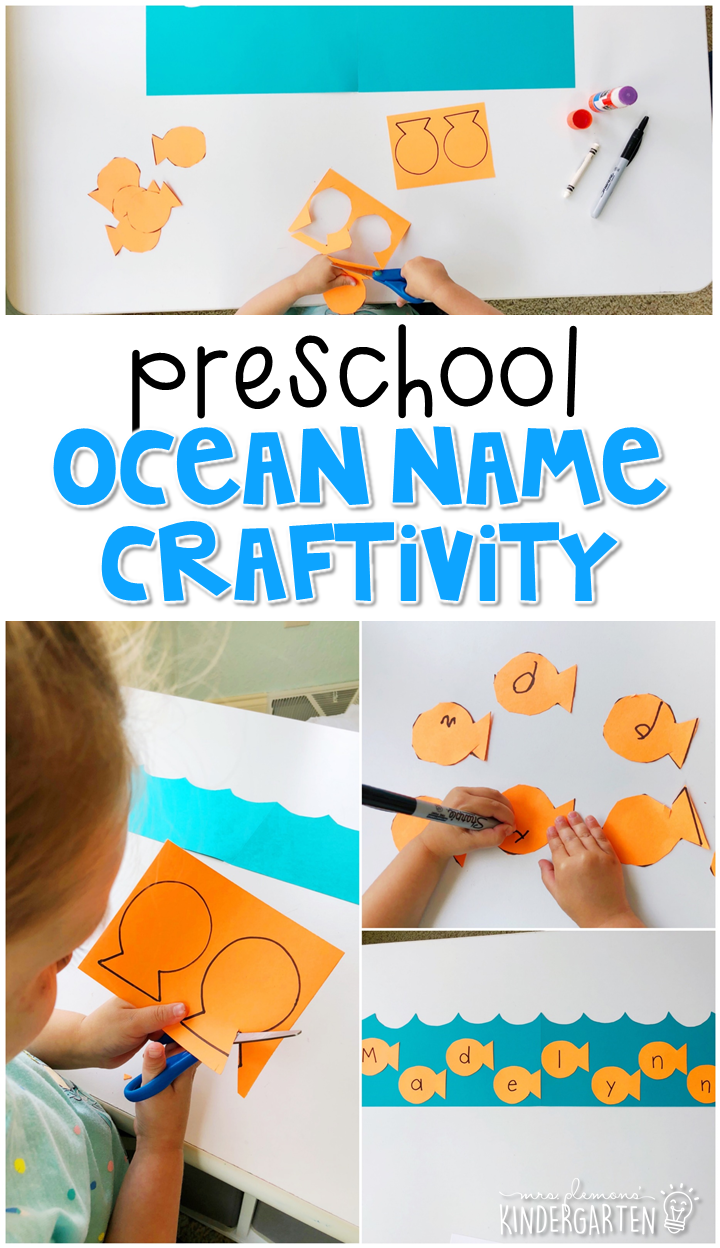 For this week’s name craft we created an ocean full of name fishies.  First, Madelynn cut the fish and water pieces out. Then she wrote the letters in her name on each fish. After she finished writing, she glued the fish together in order to spell her name. Then she added a few bubbles near each fish with a white crayon. 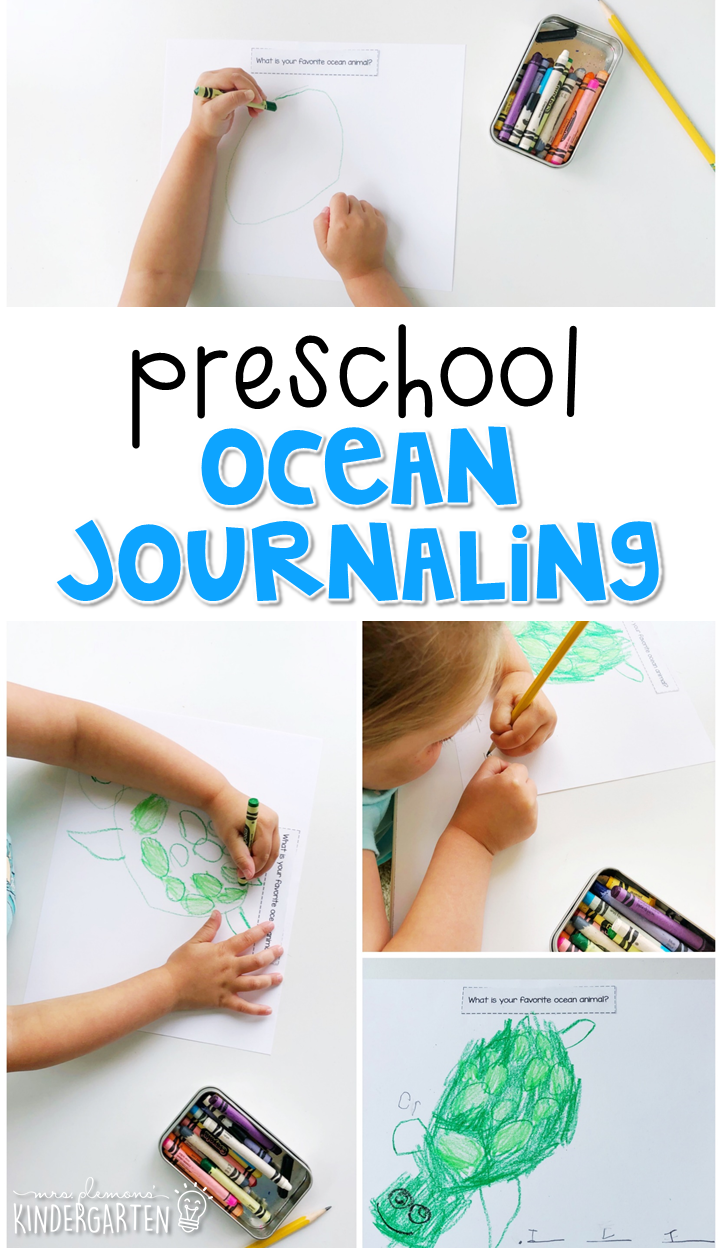 For our journal this week Madelynn chose to draw her favorite ocean animal. She said “I like turtles.”  I drew lines for each word, then we worked on writing the sounds together. 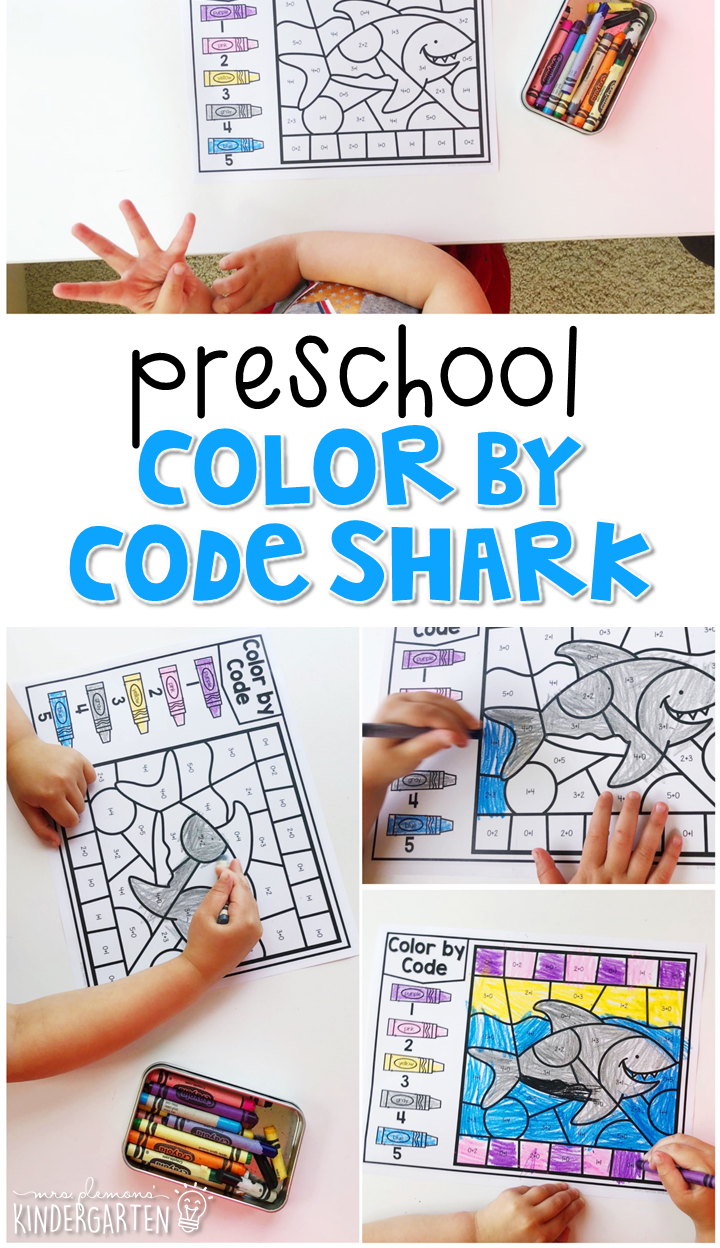 We worked on addition to 5 this week for our color by the code activity. Madelynn solved the number sentence in each section of the picture then used the key to color each one the correct color. 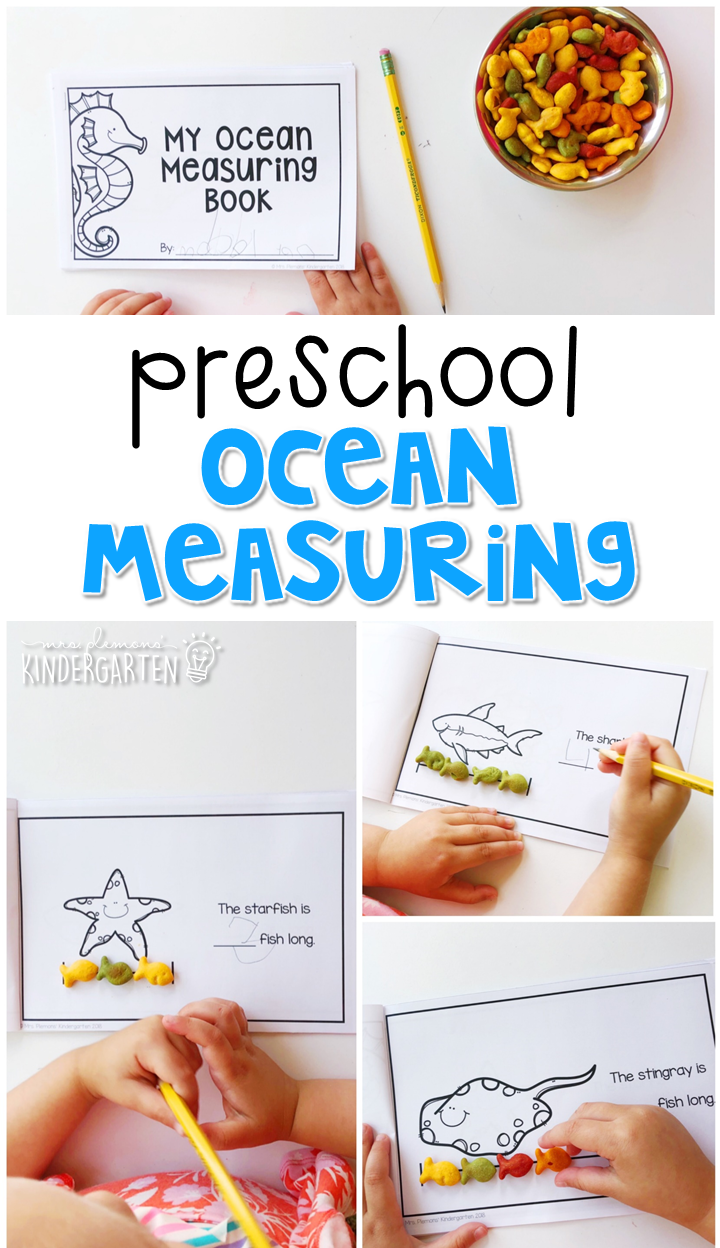 Our new math focus for the week is measurement, so we started out with using nonstandard units, goldfish crackers, to measure ocean animals. After lining up her crackers on the line to measure each animal, Madelynn counted the number and wrote it on each page. 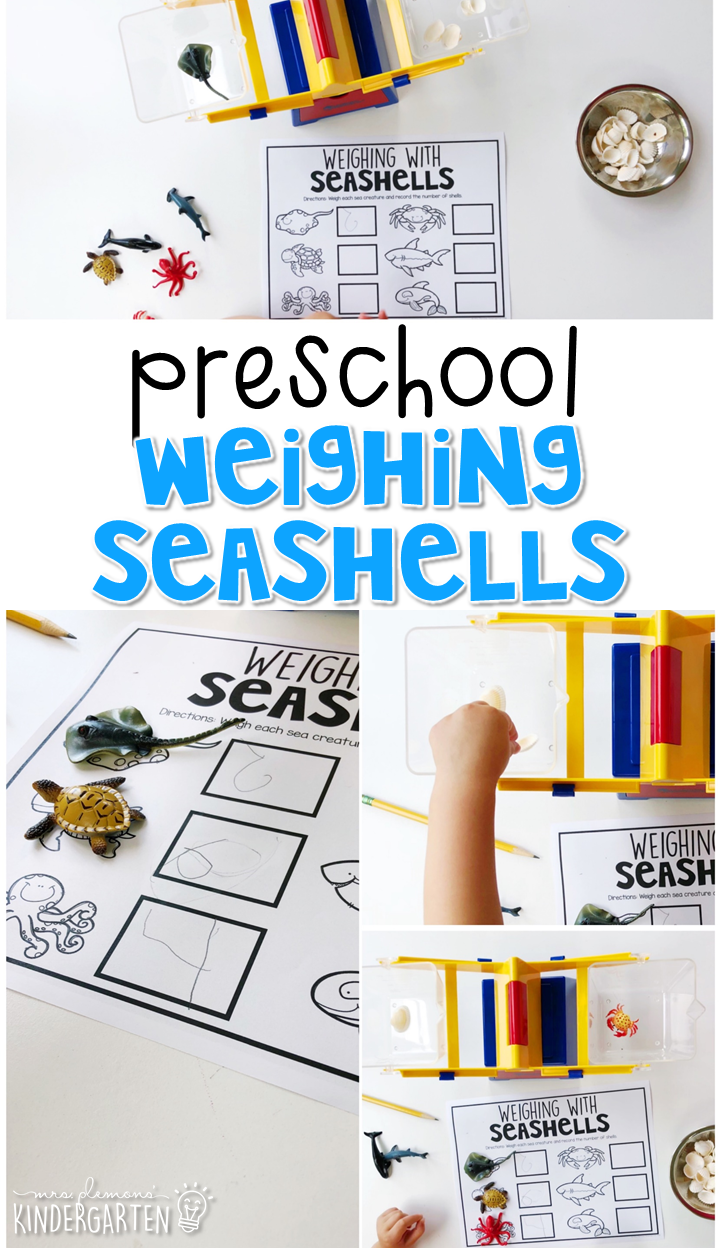 Madelynn loves experimenting with balance scale, so I made sure we had at least one fun ocean activity for learning about weight. First she choose a small plastic ocean animals  to place on one side of the scale.  Next she filled the other side of the balance scale with the seashells  one at a time until the scale balanced out. Finally she counted and recorded the weight on the response sheet. 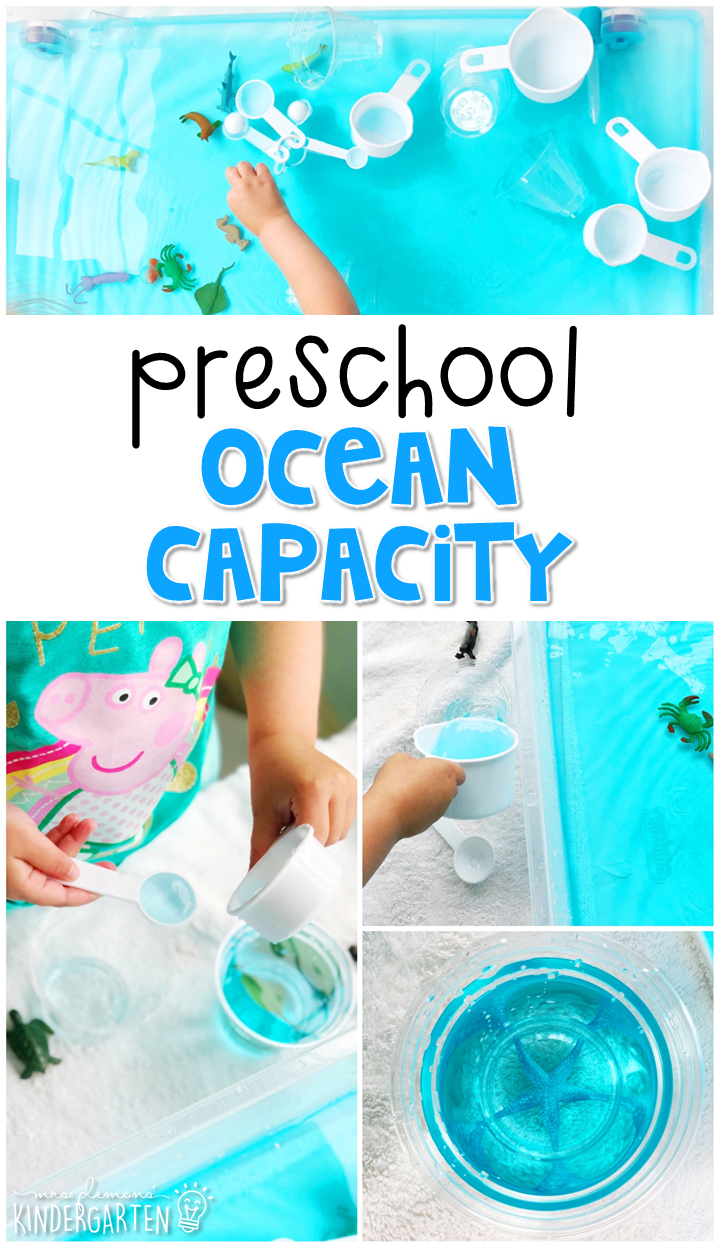 Capacity is always a fun measurement concept for preschoolers, because they love to fill and dump things.  For our ocean themed capacity exploration I filled our sensory bin with blue water. Then I added plastic ocean animals, various sized containers, measuring cups and spoons. Madelynn explored capacity by seeing how many cups, or scoops of water fit in each container. I helped her to make predictions and check to see how accurate they were as well.  She also added sea creatures to discover how they affect capacity. 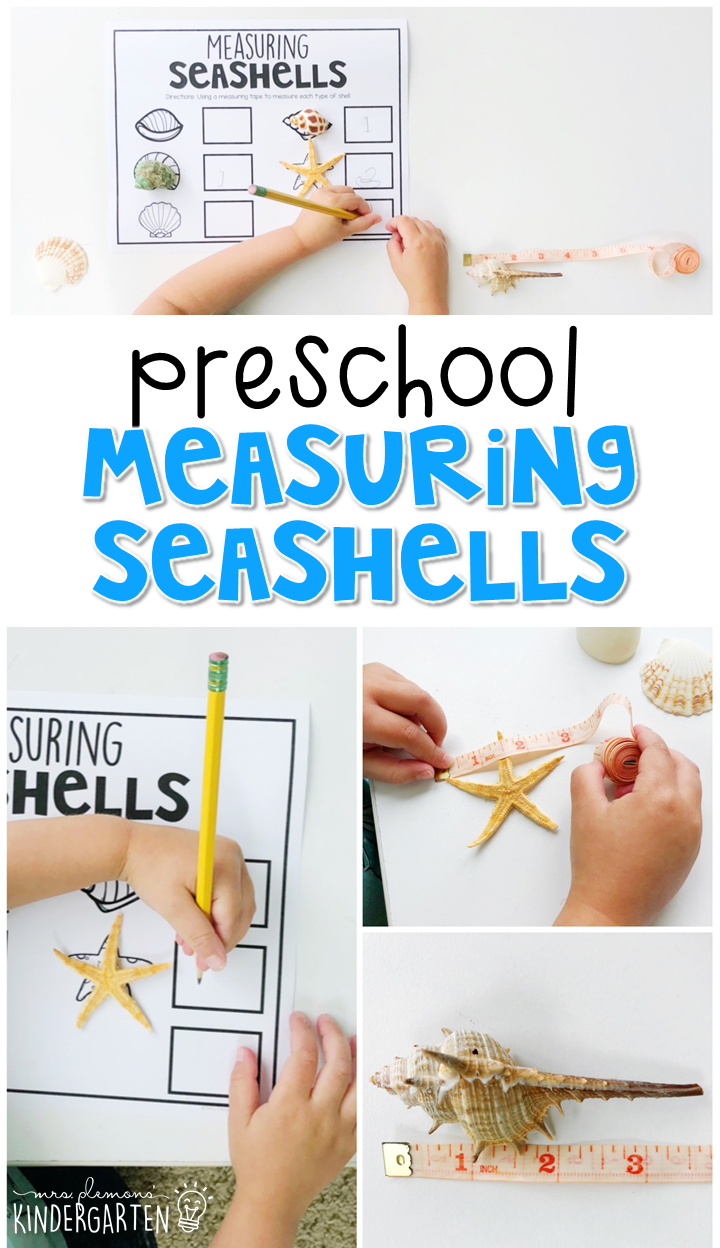 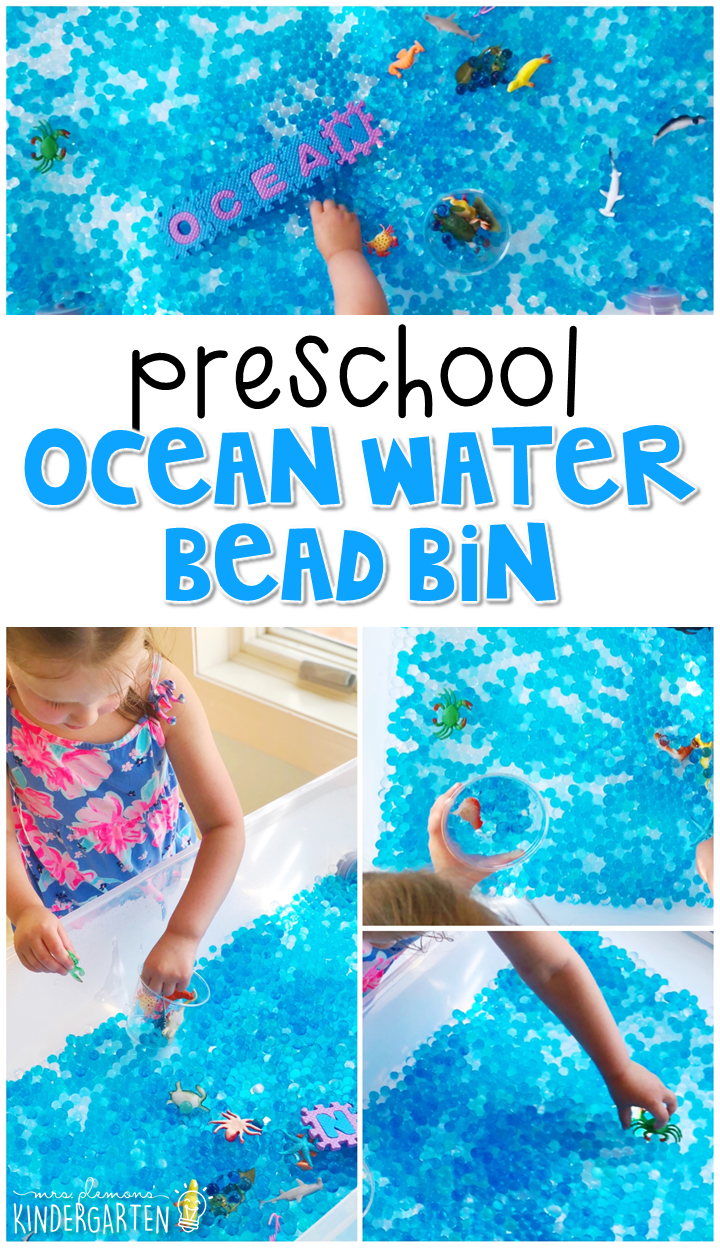 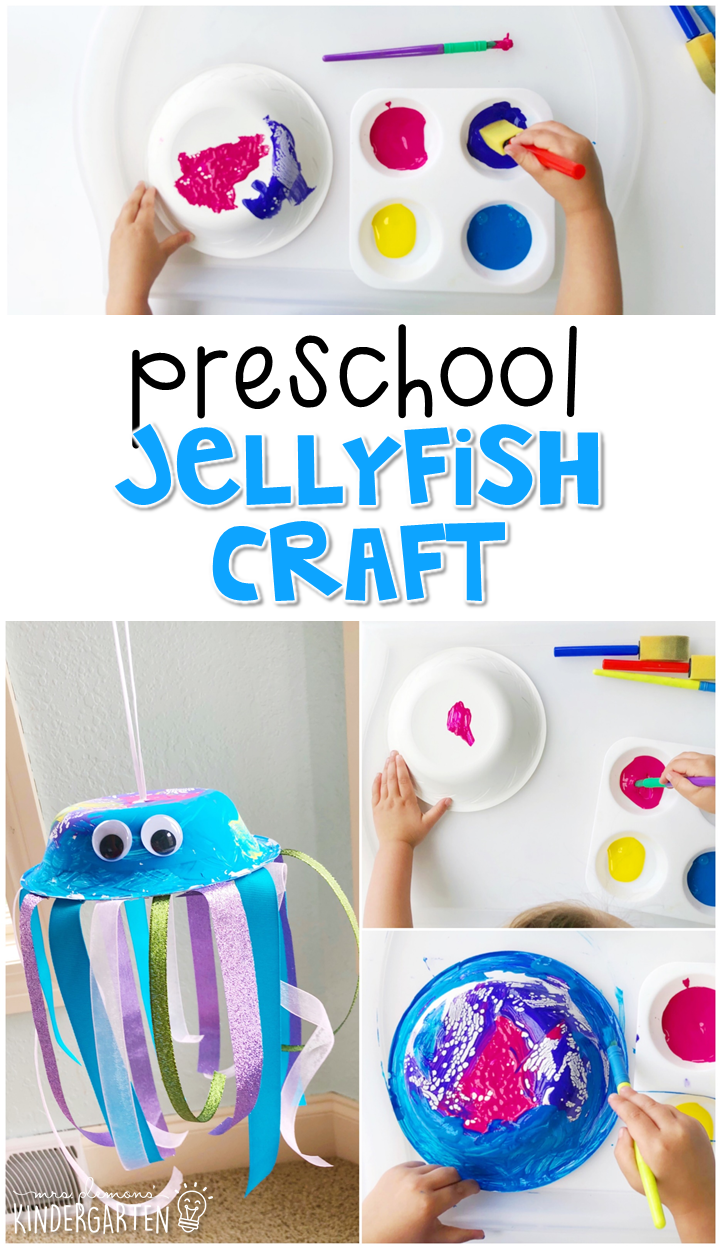 Our first craft this week was a 3D jellyfish. We started out painting a small paper bowl (try to find the least waxy variety possible so paint will stick!) various colors with tempera paint.  After it dried, I helped Madelynn cut and staple ribbons underneath the upside down bowl. Finally she glued large googly eyes to the top to finish the jellyfish, and I poked a small hole for a loop of elastic in the top for hanging. 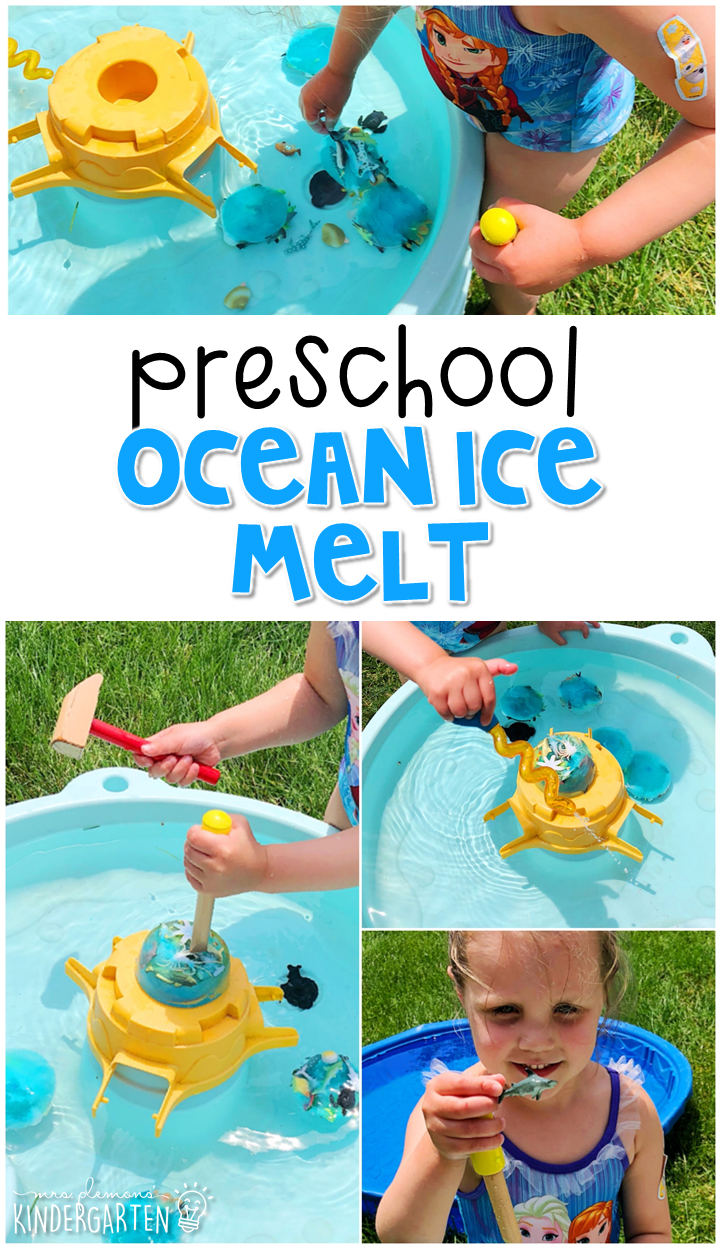 It has been nice and hot around here this week, so we moved our next activity outdoors! I froze ocean creatures in blue ice ahead of time. Then I placed the ice blocks in large bin with tools, eye droppers and cups of warm water. Madelynn used tools to excavate the ocean creatures.  We sorted, named, and counted the animals.

Our second craft was a super simple one. I printed a few fish outlines on white cardstock. Madelynn used liquid watercolors to paint bright colored tropical fish.  After the paint dried, she cut the fish out and added a googly eyes to the faces. 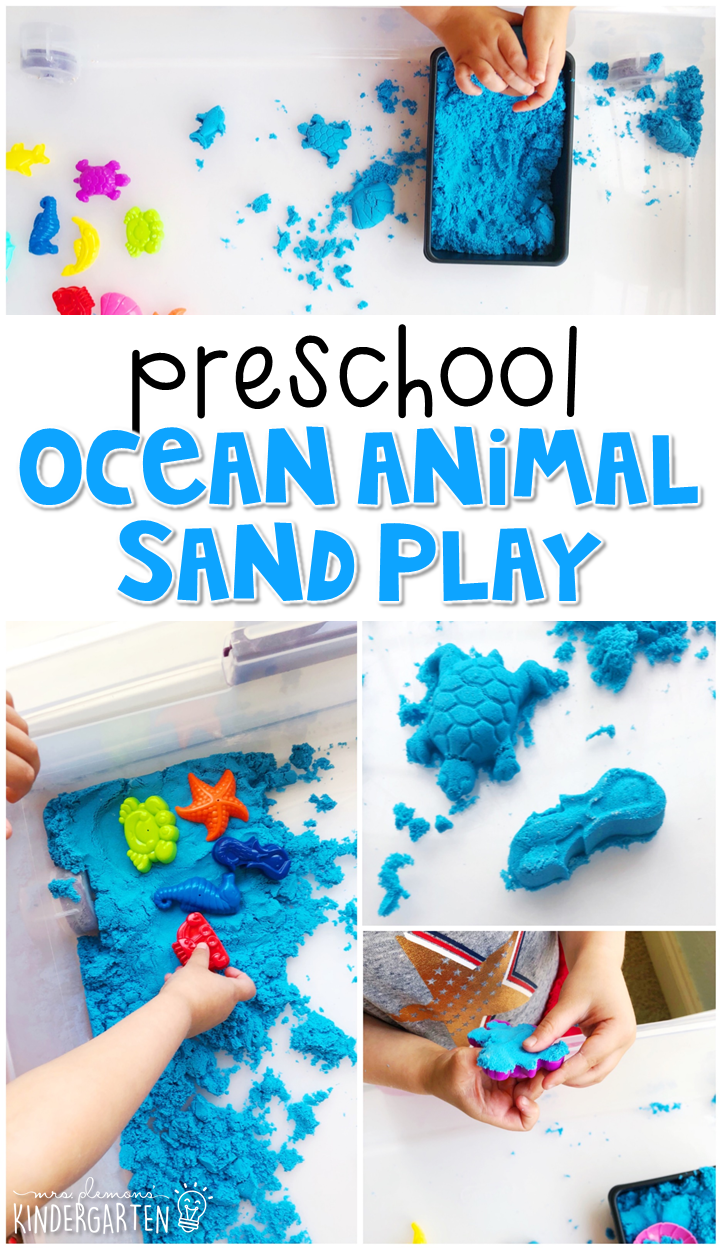 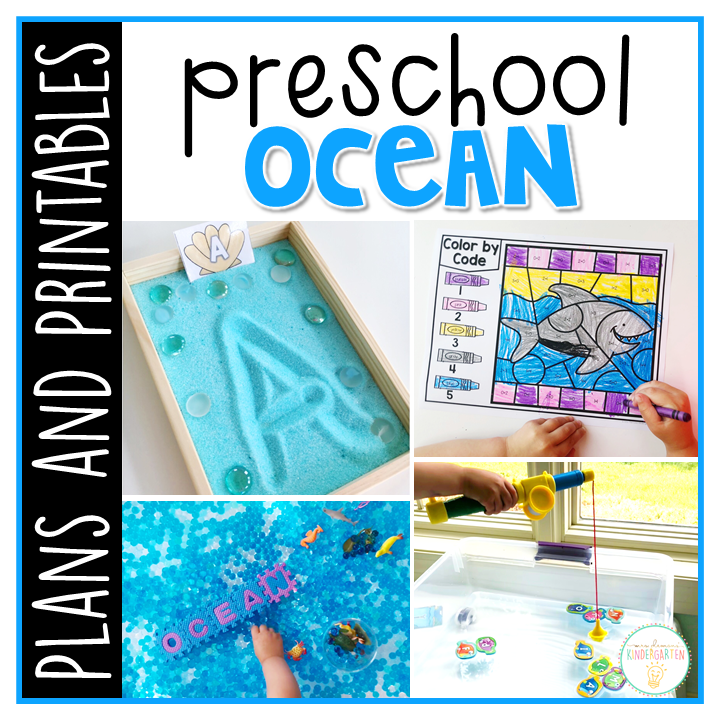