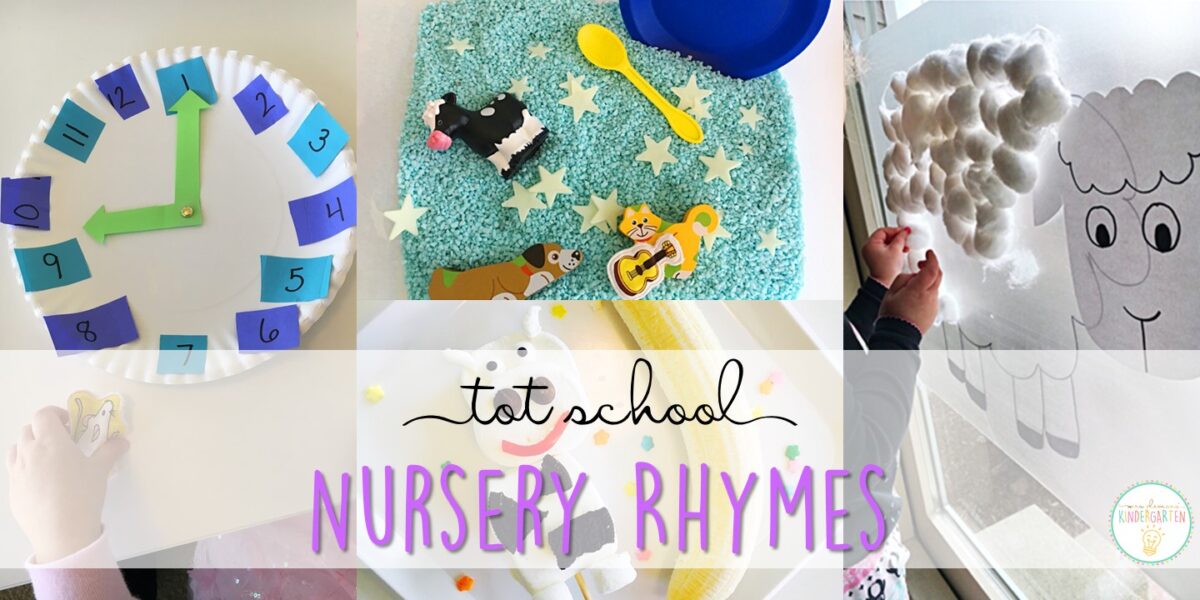 Do you teach nursery rhymes to your kids? Some people think they are outdated, or really have no value for kids today, but there are lots of great reasons to still expose children to nursery rhymes. The rhyme and repetition make them great first stories for little ones to retell. They help teach how language works, and are a great shared cultural experience. That’s why I pulled out an awesome set of nursery rhyme books and we explored them one by one for 2 full weeks of fun.

Here were our plans for Nursery Rhyme Week:

I have these little Nursery Rhyme Readers from my classroom that I knew would be perfect for Madelynn. I love them because they have simple picture cues, and have just one nursery rhyme per book.  Madelynn is starting to realize that the words on the page have meaning too, so these books are great for first attempts at pointing to print.

After reading Hickory Dickory Dock, we made our own simple clocks. I prepared a paper plate with clock hands, and wrote numbers 1-12 on strips of paper.  Madelynn first cut the numbers apart, then glued them in order around the clock.  We focused mainly on number recognition and number order not on telling time, although Madelynn did have fun playing with the clock hands too.

We continued the clock theme with this gross motor game. I printed the numbers 1-12 on cards with pictures of exercises on the reverse side.  We sang the Hickory Dickory Dock rhyme together and when we finished Madelynn stopped and named the number she landed on. Then she flipped it over to see what exercise she needed to do.

For our Hickory Dickory Dock themed snack, we made a quesadilla into a clock with cut up cheese arrows and raisins.

After reading It’s Raining, It’s Pouring we made our own rain stick. To create a more realistic sounding rain stick, I first took a piece of aluminum foil and crunched and twisted it into a spiral like a spring and fit it inside a paper towel tube. Then Madelynn helped to tape one end shut, add rice, then tape the other side shut.  Afterwards she decorated the tube with washi tape before playing with it on her own.

We didn’t have any rain this week to make real puddles, so I made pretend puddles from blue cardstock. Then we grabbed rain boots and had fun pretending to puddle jump indoors.

For our It’s Raining It’s Pouring themed snack, we made an umbrella. I used a clementine, Twizzlers pull and peel and blue M&M’s to create this snack.

Sticky window activities are our new favorite! Something about the activity being vertical with the light shining through just makes it more engaging for Madelynn. After reading Mary Had a Little Lamb we made our own sheep. I drew a sheep body on the contact paper with sharpie before taking off the backing.  Then I taped the contact paper sticky side out to the window.  I cut out a head for Madelynn to add along with cotton balls for wool.

For this activity I made a large square from washi tape on the floor, then spread mini marshmallows around it. Madelynn used a straw and scooted around on the floor to blow all the marshmallows into the box.

For our Mary Had a Little Lamb themed snack, we made a sheep graham cracker with cream cheese, mini marshmallows, raisins and candy eyes.

After reading This Little Piggy we painted a paper plate pink, then glued on construction paper pieces to create a little piggy face.

Paint with your Piggies:

This was by far a huge favorite of Madelynn’s.  I spread out a roll of paper on the floor and taped it down.  Next, I added a few squirts of paint spread out over the paper.  Then, Madelynn used her toes to squish, print and explore.  Beware this gets REALLY slippery so I ended up holding her hands most of the time so she didn’t keep falling.

For our This Little Piggy themed snack, we made a piggy bagel using pink cream cheese, a jumbo marshmallow for the nose, chocolate chips, chocolate covered raisins, and strawberries.

In this bin: The base of this bin is “clean” mud made from ivory soap, toilet paper, and  water(I used this recipe from Happy Hooligans and then added a bit of brown paint to dye it), then I added fences and these cute little piggies.

After reading the Itsy Bitsy Spider we used felt pieces that I made to retell the rhyme. If you are looking for a set that is premade you can find one here.

To prep this activity, I wove white party streamers all throughout our dining room to create a tangled web.  Madelynn had to crawl through the web without disturbing any streamers.

For our Itsy Bitsy Spider themed snack, we made this easy little spider cookie from an Oreo, pretzel  sticks, and candy eyes.

In this bin: clear water beads (rain), sun toy, plastic spiders, and a PVC pipe for the waterspout

After reading There Was an Old Woman Who Lived in a Shoe, we used shoes to make prints on a large roll of paper.  Madelynn had fun exploring the different prints and also spreading the paint around with each shoe.

This activity was meant to seriously wear Madelynn out! I filled a basket with several different pairs of shoes.  She started at the basket, searched for a matching pair of shoes, put them on, ran to the other side of the room and took them off.  Finally she ran back and started again until all pairs of shoes were moved to the other side of the room.

For our There was an Old Lady themed snack, we made this little shoes with nutter butter cookies and a bit of writing icing.

There Was An Old Woman Sensory Bin:

After reading Little Miss Muffet, we painted a web for the spider in the story. I prepped white paper ahead of time by drawing a web with a white crayon. Then Madelynn used watercolor paints to reveal the hidden web.

Sit on the Tuffet:

This gross motor game was hilarious to watch! Madelynn and I said the Little Miss Muffet Rhyme while she went around the circle sitting on each “tuffet” when we finished she peeked under the last pillow to find and name the hidden shape. Fun and tiring!

For our Little Miss Muffet themed snack, we made this easy spider sandwich from an Uncrustable, pretzel sticks, and M&M’s

After reading Hey Diddle Diddle, we made our own fiddle for pretend and play.  Ahead of time, I traced and cut out a fiddle shape from 4 layers of cardboard.  Then I hot glued the layers together to make a sturdy piece for the fiddle. Next, I hot glued a paper towel tube to the end and cut a notch in the top for the “strings.” Madelynn used markers to decorate her fiddle, then stretched 4 rubber bands from the top to the bottom. Finally I gave her a chopstick to use as a bow, and she rubbed it across the rubber bands to play her fiddle.

Next we tried to make that silly little cow jump over the moon with this fun STEM activity.  First we built a popsicle stick catapult by stacking 10 popsicle sticks together and tightly wrapping a rubber band around both ends.  Then we placed one popsicle stick on top and one on bottom, perpendicular to the stack of 10 and wrapped a rubber band around the center to secure.  Finally, we wrapped another rubber band around one end of the 2 sticks and hot glued a spice container cap to the other end. Then I placed a moon cookie cutter on the floor and Madelynn placed a small cow toy on the catapult and tried to launch him over the moon. The best part was watching her run back and forth a million times to retrieve her cow tiring her right out 🙂

For our Hey Diddle Diddle themed snack, we made this super cute little cow jumping over the moon. First I pieced together different sized marshmallows to create a cow. I used a skewer and toothpicks to get them to stick together, but I also cut many of the pieces and used the sticky side to help hold them in place. Next I added details with broken Oreos, Twizzlers pull & peel, chocolate chips, and candy eyes.  For a moon we used a banana, and then added sprinkle stars for the night sky.

In this bin: blue aquarium rock, cat & dog (from this Melissa & Doug puzzle), Little People cow, felt “fiddle” (aka guitar because its the closest thing I could find), glow in the dark stars, dish and spoon

After reading Little Boy Blue, we used this sticky window activity to retell the story.  I drew a haystack and meadow on a sheet of contact paper before removing the backing.  Then I taped it to the window sticky side out. Madelyn used laminated pieces from the story and cut up pieces of hay to build scenes from the rhyme and retell.

To prep the “hay” for this activity I cut up lots of sheets of yellow scrap paper into long strips. and crumpled them up.  I also cut up raffia and tossed that in the mix with the paper.  I spread the “hay” all around the room. Madelynn had to try to pick it all up and put it in a basket to make a “haystack” as quickly and she could.

For our Little Boy Blue themed snack, we made these peanut butter haystacks from All Recipes.com

After reading Humpty Dumpty, we made our own Humpty Dumpty with this play dough tray. I gave Madelynn various colors of play dough, an egg cookie cutter, felt clothing, sticks and googly eyes and she decided to make a little egg family.

Build a Wall for Humpty:

For our gross motor activity we used our large blocks to build tall walls for humpty then pretended to make humpty fall down.

Our Humpty Dumpty snack was one of my favorites! Stack up frosted mini wheat bricks to form a wall at the bottom of a plate. Core and cut an apple in half.  Peel the top half of the apple. Add licorice pieces for arms and legs.  Add candy eyes and a chocolate sprinkle for the mouth.