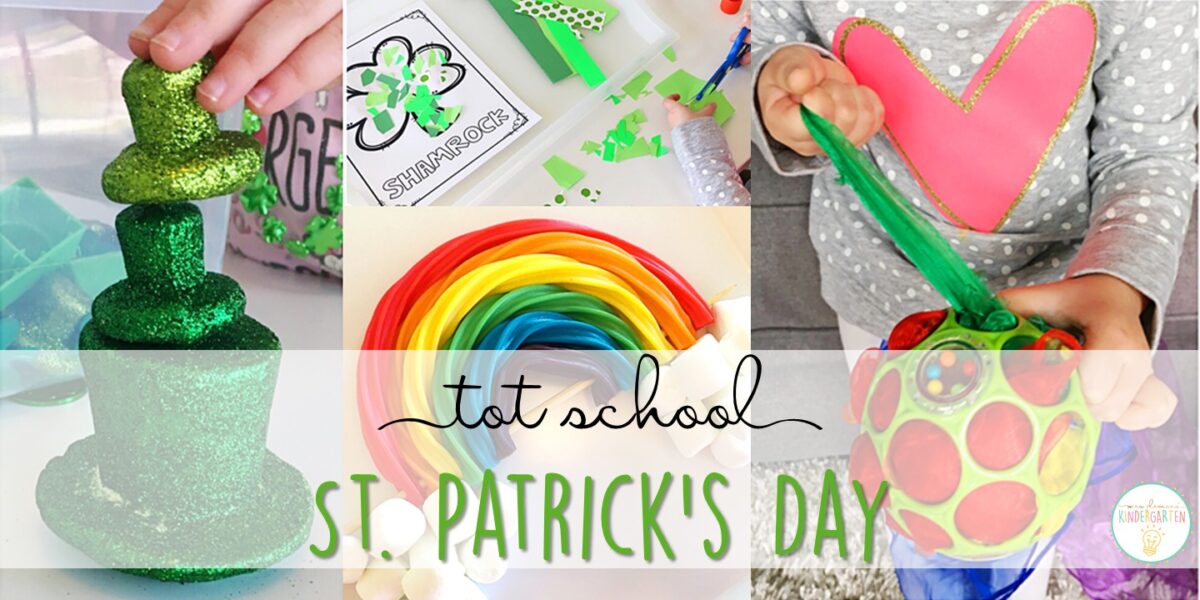 So it’s been snowing all day here, but we’re still thinking spring thoughts! This week we were on green and rainbow overload celebrating with some St. Patrick’s Day fun!

Here were our plans for St. Patrick’s Day:

Our favorite books this week were:
There Was an Old Lady Who Swallowed a Clover by Lucille Colandro
St. Patrick’s Day by Anne Rockwell
Green Shamrocks by Eve Bunting
Jamie O’Rourke & the Big Potato by Tomie DePaola
The Luckiest Leprechaun by Justine Korman

For this rainbow craft I prepared a sheet of paper ahead of time by drawing the arc guidelines for the rainbow with a pencil.   Then we used a mini marshmallow and a clothespin for our paintbrush. Madelynn dipped the marshmallow into each color of tempera paint and followed the guidelines to fill in her rainbow.  This was a great fine motor and concentration activity for her.

Who doesn’t love playing with their food? I stuck skewers into play dough and placed one Froot Loop of each color onto the skewers.  Madelynn worked hard to sort a tray full of cereal to stack a rainbow.

We worked on our cutting skills with this Snip and Glue Shamrock. First, I printed a shamrock outline and cut strips of different shades of green paper. Then, Madelynn used her scissors to snip small pieces of paper, and glued them to fill in the shamrock.

You know we love our sticky window activities over here. This week we made a rainbow with tissue paper. To prep the activity, I drew arcs on the contact paper with a pencil before peeling the backing off.  Then, I taped the contact paper sticky side out on the window for Madelynn to fill in.

This activity was super fun to watch because I didn’t tell Madelynn what was going to happen so each new color was a surprise! To prepare the activity I put a few drops of food coloring into 6 separate cups and line them up in rainbow order.  Next, I poured baking soda into each cup until the food coloring was covered (no exact measurement needed, more baking soda=more fizzy explosion.) Then I filled another cup with white vinegar, added eye droppers and set it all up on a tray for Madelynn to explore. Without any direction she knew just what to do, as soon as she started dripping vinegar into the cups they began to fizz.  As she added more each color began to show through and become brighter and brighter. Such an easy and fun way for her to explore rainbows and practice fine motor skills.

This game was a combination of fine and gross motor practice.  I grabbed an O-Ball, filled it with rainbow colored scarves, then we played catch. Each time she caught the ball I named a color for her to find and pull out. Then she’d toss it back and name a color for me to find.

For this relay, I gave Madelynn a bowl of rainbow colored candy and a spoon.  On the other side of the room I lined up cups for each color. When I said go, Madelynn ran one color at a time across the room to sort them into the correct cups. Of course she stopped to snack on a few along the way 😉 If you don’t want a giant sugar rush you could also use Froot Loops cereal instead.

For this activity I printed small, medium, and large shamrocks, dumped them on the floor and labeled a 3 bins.  We took turns running back and forth with one shamrock at a time and dropping it in the right basket.

To make this gross motor game a little more fun I started by cutting a beard from felt and attaching a piece of elastic to make it wearable.  Then I taped 6 lines of green tape at varying distances on the floor. I had Madelynn jump, hop on one foot, and even do a little jig from line to line to get all of her energy out.

Fruit Rainbows – This fruit rainbow was easy and could easily be made with different variations of fruit that you have on hand. We used strawberries, clementines, bananas, kiwi, blueberries, and grapes.Lucky Charms Treats – We made these treats following the recipe for Rice Krispy treats but swapped out the cereal with Lucky Charms.  (6 cups Lucky Charms, 3 Tbsps butter, 4 cups mini marshmallows Heat butter and marshmallows in microwave for 3 minutes. Stir until smooth. Add cereal. Press into a pan.)

St. Patrick’s Popcorn – Pop a bag of microwave popcorn. Remove any unpopped popcorn kernels. Toss in green peanut M&Ms and marshmallows. Melt vanilla candy melts according to package. Pour half of melted candy over popcorn mixture. Stir and repeat with the second half. Pour mixture onto wax paper and add sprinkles.
Graham Cracker Rainbows – Break a graham cracker in half. Spread both halves with vanilla frosting. Add a few mini marshmallows for clouds. Cut a Rainbow Airheads Xtremes in half and form an arc between the clouds.  Sprinkle frosting with blue sugar.
Licorice Rainbow – I’ve seen treat bags with these rainbow Twizzlers on Pinterest so I thought I’d make something similar for a special snack this week.  Since I didn’t want to put them in a bag, I used a skewer and pushed it through each color. After arching the licorice back through the skewer a second time, I cut the extra length off then laid it on a plate with a few marshmallows for clouds.

In this bin: rainbow rice, gold coins, scoops, and cups

In this bin: split peas, green magna tiles, gold coins, little people leprechaun (I used a zookeeper and added a few snips of felt with double stick tape for a hat and beard)