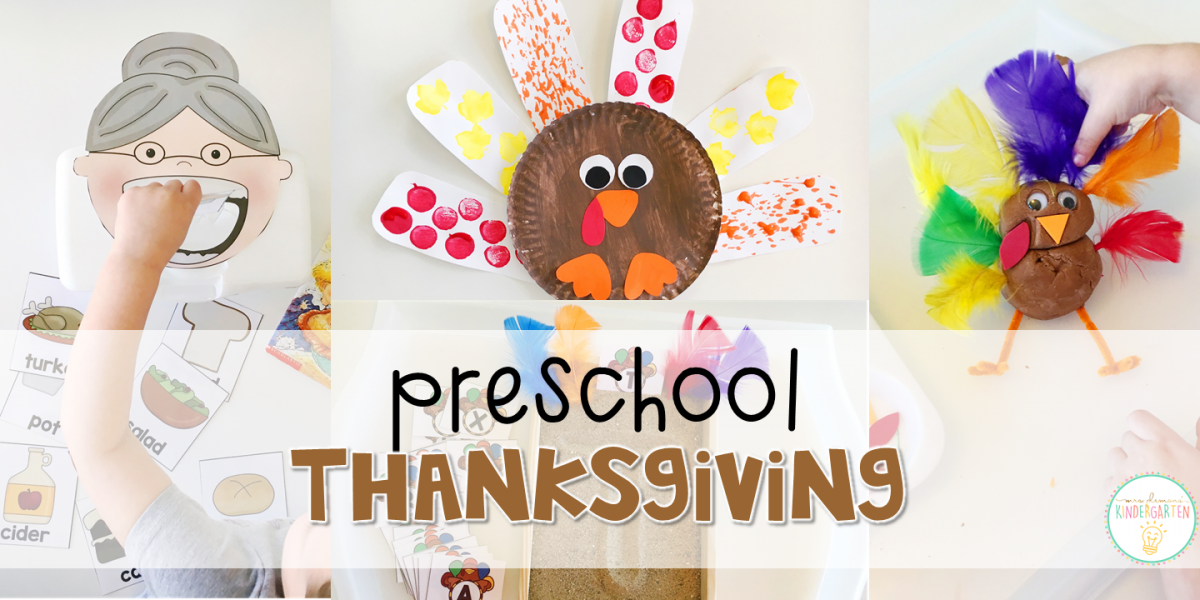 Whew what a month! November is drawing to a close and we finished up our Thanksgiving theme this week all while stuffing ourselves silly. 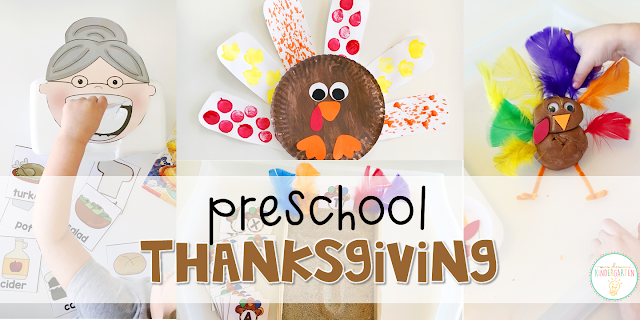 **This post contains affiliate links for your convenience. View our full disclosure policy here.**
Here were our plans for our Thanksgiving theme: 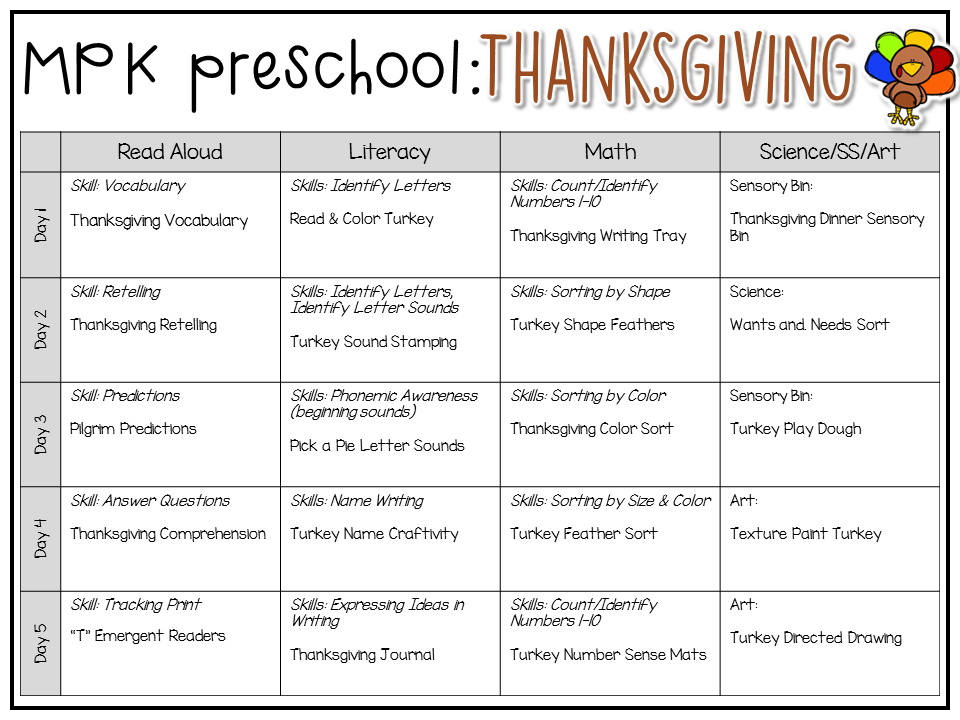 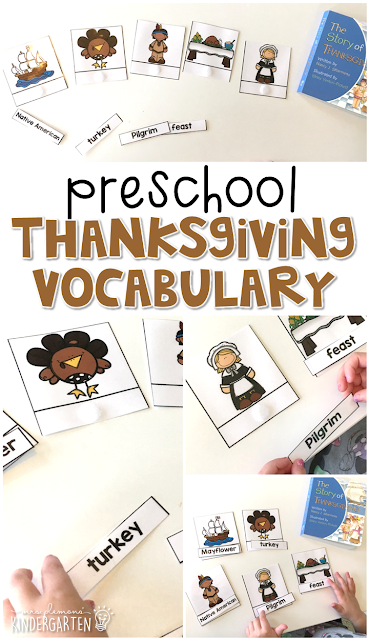 Madelynn is a bit young to really get to into the story of Thanksgiving, so I kept it simple with The Story of Thanksgiving by Nancy Skarmeas. Then we worked on a quick vocab matching activity. I chose the 5 words from the story that will best help her understand Thanksgiving in the future. I emphasized the beginning sounds to help her choose and match the correct word to the picture. 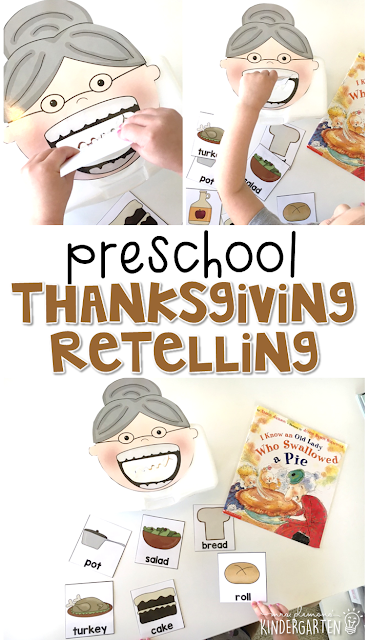 Our next read aloud was I Know an Old Lady Who Swallowed a Pie by Alison Jackson. After reading, I taped a picture of the little old lady to a wipe container then gave Madelynn pieces from the story. She fed them to the little old lady while retelling the story in order. 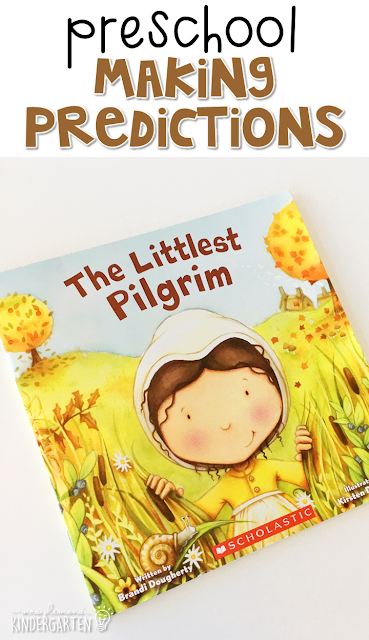 Pilgrim Predictions:
Our next story was The Littlest Pilgrim by Brandi Dougherty. Before reading, we practiced making predictions.
I asked “After looking at the cover, what do you think this story will be about?”
Madelynn: “I think she’s going to find something good to eat.”
Then I asked: “What do you think she will eat?”
Madelynn: “Maybe some turkey.” 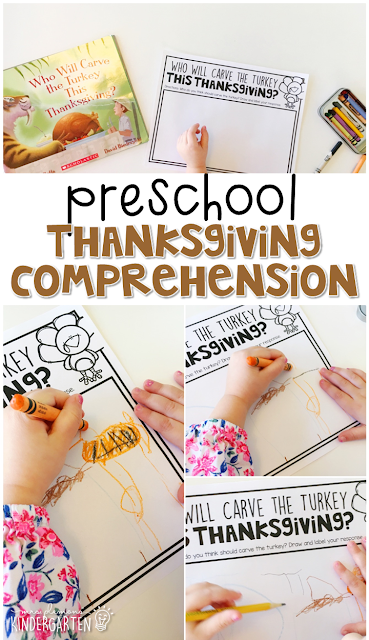 Thanksgiving Comprehension:
Our next book Who Will Carve the Turkey This Thanksgiving by Jerry Pallotta, was a silly Thanksgiving themed story that was full of imagination.  The boy in the story wonders who will carve the Thanksgiving turkey and imagines what it would be like if different animals came to help.  After reading all of the silly choices in the book, I asked Madelynn to draw who she thought should carve the turkey. She chose a tiger because he has “super sharp teeth.” 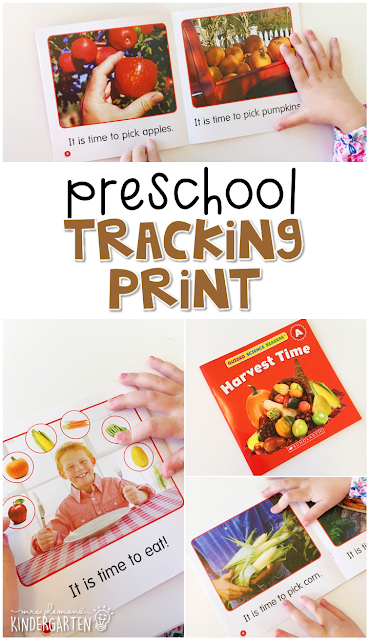 Tracking Print:
Our last book was Harvest Time from our set of Guided Science Readers. Madelynn is starting to read easy level A books with patterned text. First, I read the beginning of the sentence, “It is time to pick…” and paused, then she read the last word. She did a great job using picture clues to read the words.   And after the first 2 pages she was able to read the sentence by herself. 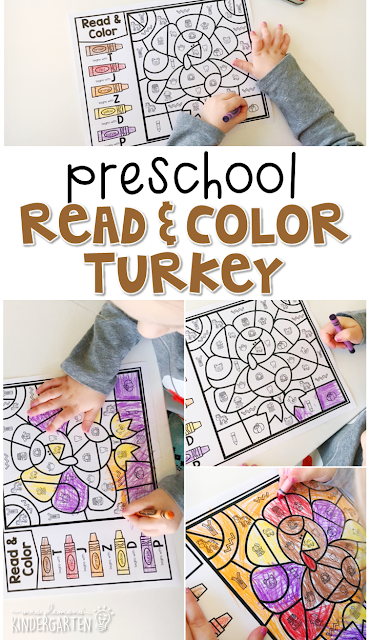 Turkey Read and Color:
This week we focused on beginning sounds so we started with this color by code activity. Madelynn identified each picture, then decided what letter it started with. Knowing it was one of the 5 listed on the left side of the page helped with some of the trickier sounds, then she followed the directions to make each spot the correct color. 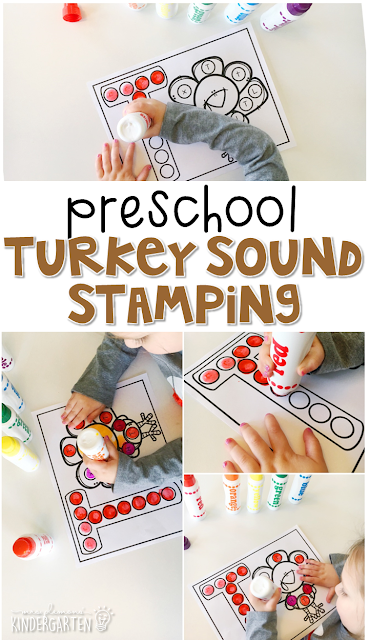 Turkey Sound Stamping:
Next, for more letter practice we used our dot stampers. We started out stamping inside the letter to make a T. Then Madelynn had to find the upper and lowercase t’s in the turkey stamp them and make the “T” sound each time. 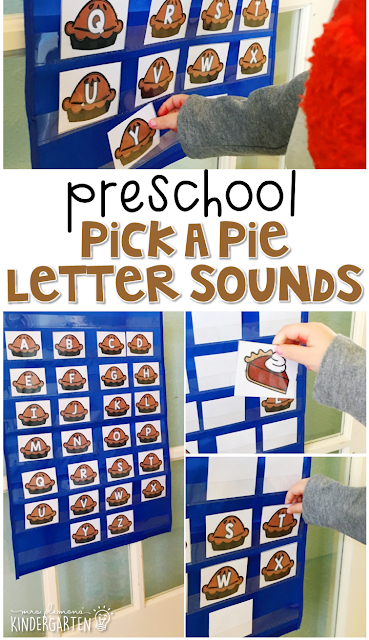 Pick a Pie Letter Sounds:
This month we are focusing on beginning sounds so I put together this pocket chart sound game.  First I printed each letter on pumpkin pies and placed them in a pocket chart.  Next I hid 2 pie slices behind 2 different letters. Madelynn chose a pie, said the letter, then made the sound. If she got it right she flipped the pie over to see if there was a slice hiding behind it. She continued to play until she found each slice of pie. 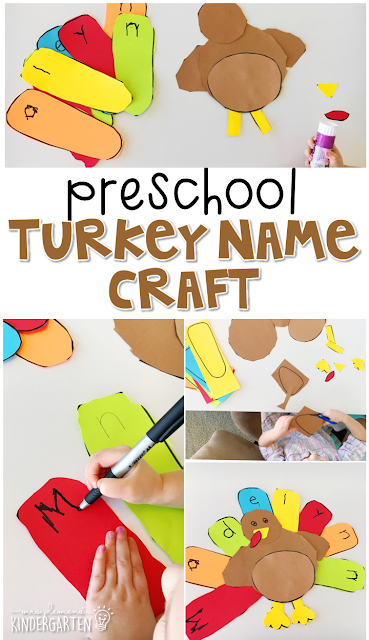 Turkey Name Craft:
For this week’s name craft we created a colorful turkey.  First Madelynn cut the turkey and feather pieces out. Then she wrote the letters in her name on each feather. After she finished writing, she glued the pieces together and added the feathers to the turkey in order to spell her name. 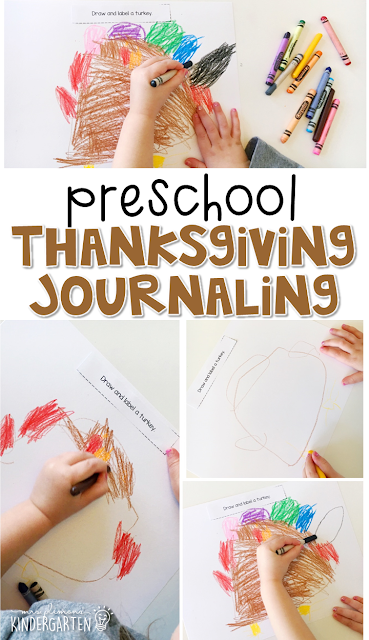 For our journal this week Madelynn chose to draw and label a turkey. She drew a large turkey with colorful feathers. 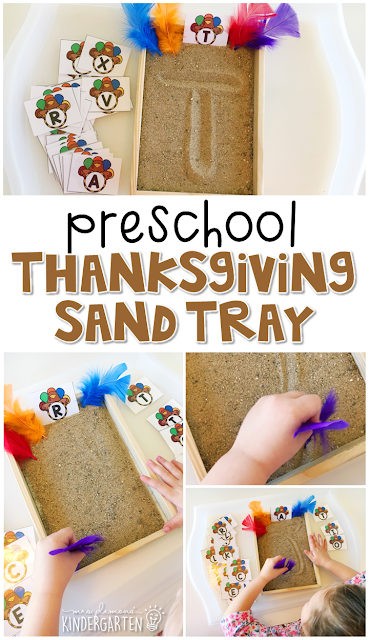 Thanksgiving Sand Tray:
Our first math activity this week was a thanksgiving themed sand tray.  Of course my strong willed Madelynn didn’t want to practice numbers, so we decided to do letters instead. I filled the tray with sand and a few colored feathers. Then Madelynn used small turkey cards as a model to write letters in the sand with the colored feathers. 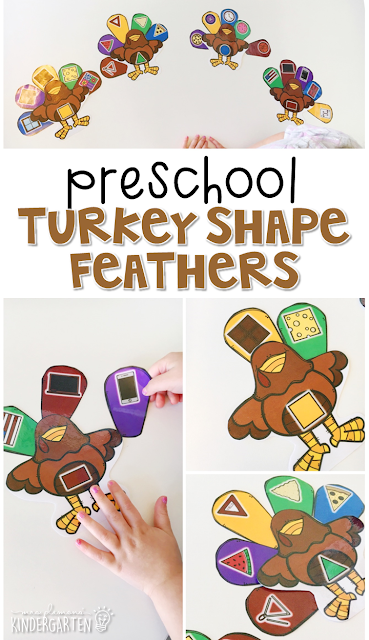 Turkey Shape Feathers:
This week’s math focus was on sorting. We began with sorting by shapes so I made these shape turkeys with shape item feathers.  She chose a feather named the shape of the item then added it to the matching shape turkey to complete each one. 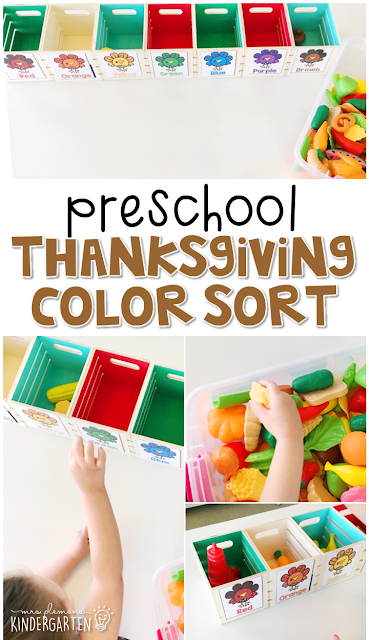 For our next sorting activity we focused on sorting by color.  I set up bins with colored turkey labels on each one. Then I gave Madelynn a bin full of different colored play food and she fed each turkey the correct color food. 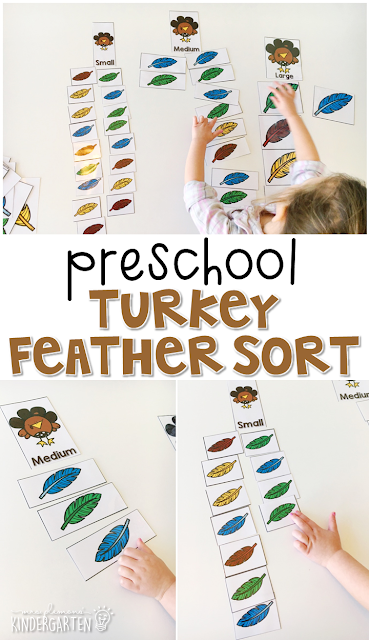 For our last sorting activity, we practiced sorting in 2 ways.  First Madelynn sorted feathers by size. 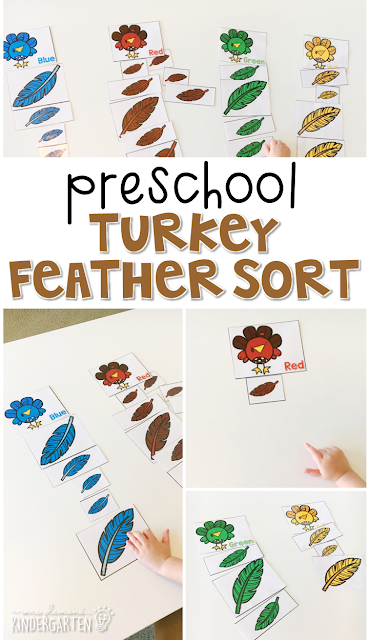 Then, she sorted the same feathers by color. 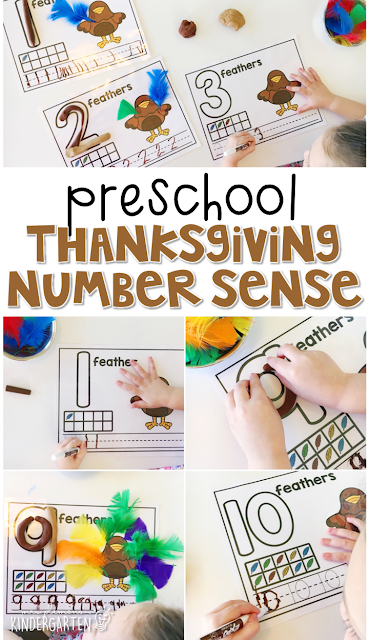 We used these mats for LOTS of math practice this week. First, Madelynn identified the large number. Then she made it with play dough and counted the feathers in the ten frame. Next, she used a dry erase marker to practice writing the number, and finally counted out colored feathers to make the correct amount. 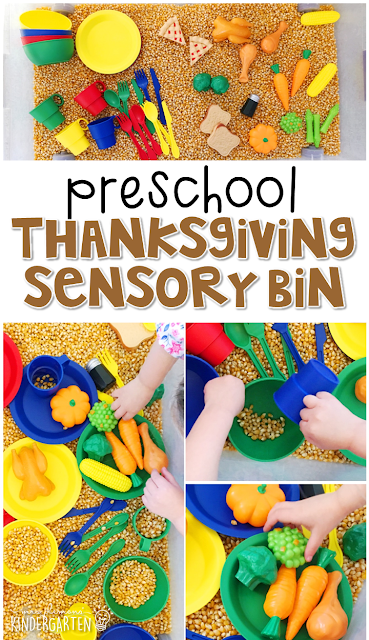 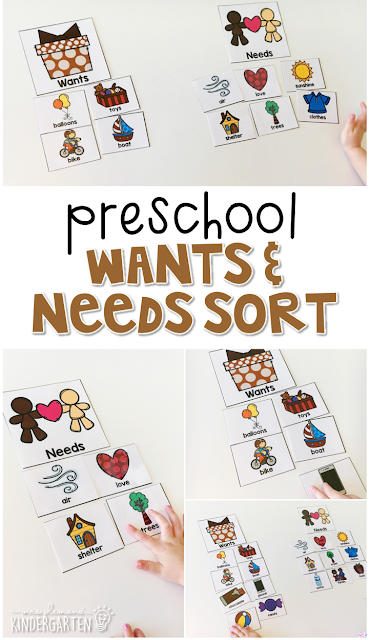 Wants & Needs Sort:
After learning a bit about Thanksgiving, we had a discussion about things that we are thankful for.  We talked about the usual things you’d expect a 4 year old to think of: food, candy, toys, etc.  Then I introduced this wants and needs sort.  This was definitely a difficult topic for her to understand but it led to a really good discussion about why certain things are not needs. 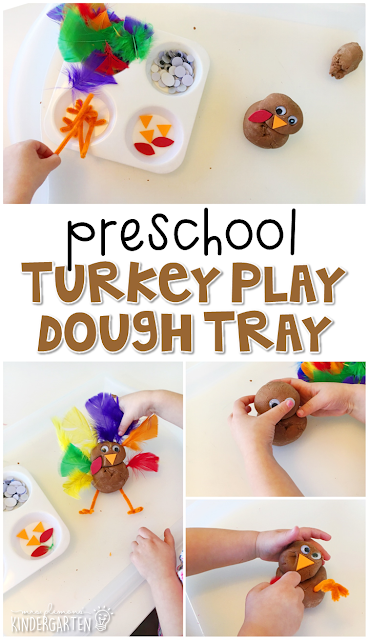 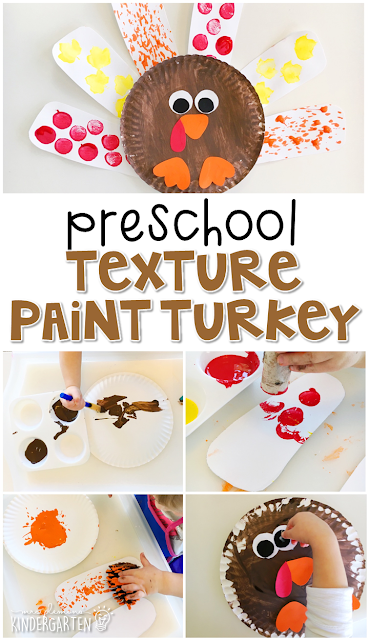 For this turkey project we started by painting a paper plate brown.  While that dried we painted each feather different textures by stamping it with different fall materials (pine cones, small branches, and leaf stamps). After all of the pieces dried, we added paper cut outs for the turkey face and attached the feathers behind the paper plate. 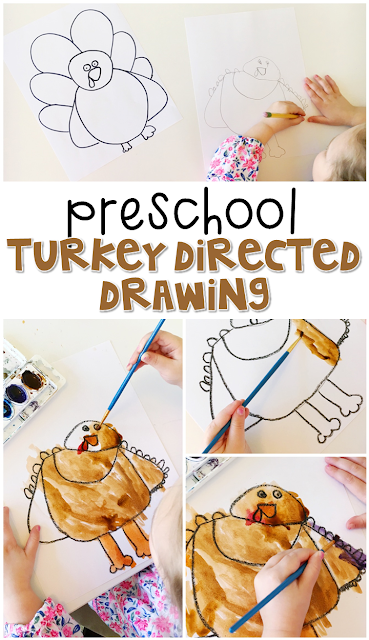 I’ve been wanting to try directed drawings with Madelynn for a while, so this week was the perfect time to give it a try with a simple turkey.  For the directed drawing I drew one part of the turkey at a time on my paper, and Madelynn followed along by drawing the same or similar shape on her paper.  She is quite the perfectionist, so I had her use a pencil in case she wanted to erase try any part of the turkey again.  Then I quickly outlined the entire turkey with a black crayon.  (You could definitely skip the pencil and start with a black crayon to save time.) To finish off the project, Madelynn used watercolors to paint her turkey. 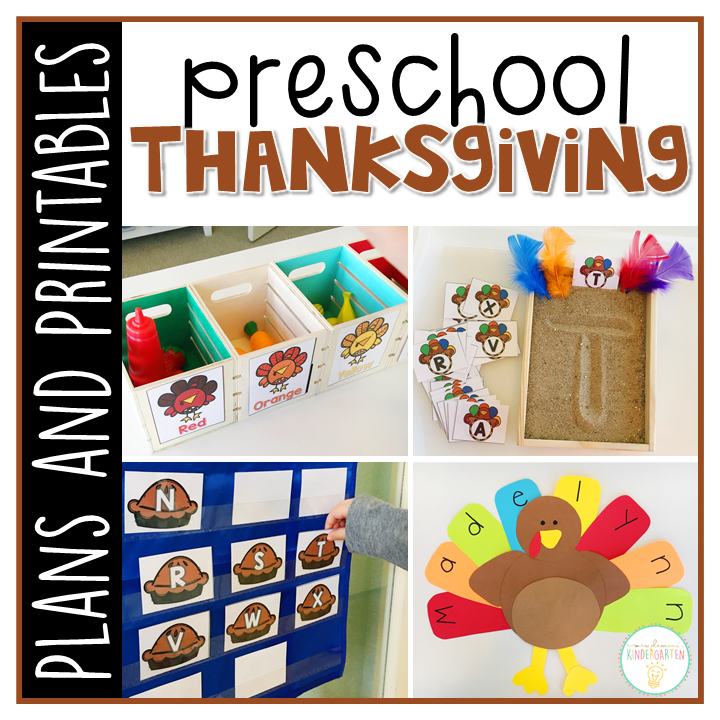